Wilhelm Webels was the oldest of four children. Theodor Webel's father was a book printer and founded his own printing company in Essen in 1906 . In this way he got to know all the work processes in a print shop at an early age. From 1908 until his Abitur in 1916, he attended the Goethe-Gymnasium there . Immediately after graduating from high school , the military began until the end of the war . From 1918 to 1922 he studied medicine in Münster , Würzburg , Göttingen and Berlin . He finished his studies with a doctorate in Dr. med. and Dr. phil. and became an assistant doctor at the Elisabeth Hospital and the municipal hospitals in Essen .

During this time he married Maria Schaefers and attended the Folkwang School in Essen with professors Joseph Enseling (modeling) and Josef Urbach ( painting ). Because of his participation in the resistance against the occupation of the Rhineland , he was forced to go to Philadelphia with his wife in the USA in 1923 . Before he was allowed to work as an assistant doctor there, he had to work as a nurse . Since the wages were too low, he also worked as a modeller and plasterer . On non-working Saturdays, he attended medical lectures at the Pennsylvania University there . After a year he got together with an employee, the pediatrician Dr. A. Staub from Essen, self-employed as an advertising painter and shop window decorator. When the situation in the Ruhr area normalized, he returned to Germany and started working as an assistant doctor at the Elisabeth Hospital in Essen in 1925. In addition to his job, he took cello lessons from Max Queck from the Essen Municipal Orchestra, where he already played the piano and organ .

In 1930 he became chief physician of the gynecological department of the Elisabeth Hospital in Recklinghausen until he was drafted as a medical sergeant on a punitive basis for political reasons. In English captivity from April to September 1945, he and other doctors were sent to the Bergen-Belsen concentration camp to provide medical aid to the 20,000 former prisoners there. He processed the experiences there in his radio play " Anabasis ". When he returned home, he resumed his work as chief physician at the Elisabeth Hospital in Recklinghausen, which continued until 1965. During his vacations in 1950 and 1951, he wrote the play "Ein Spiel vom Doktor Faust ", which was performed in Recklinghausen, Marl , Uelzen and Oberursel . In 1955, after a long break, he began to paint again, with a passion that would not let go of him until his death. Chairman of the "Gesellschaft der Musikfreunde", member of the " Vestischen Künstlerbund" in Recklinghausen and the friendships with the expressionists Otto Pankok , Franz Radziwill and Ludwig Meidner were an expression of his artistic inclinations.

After his retirement in 1965 he moved to his house in Willingen to devote himself entirely to art. In 1966, in addition to painting , he began to cut sculptures from oak and a year later to create woodcuts ; then in 1970 watercolors and acrylic drawings followed . Wilhelm Webels died at the age of 75 on August 26, 1972.

He has been a member of the VKDSt since his student days . Saxonia zu Münster in the CV .

A street in Recklinghausen was named after him in 1972.

Wilhelm Webels' works have been shown in numerous exhibitions in Germany, Italy , Canada and Holland . Paintings , sculptures and woodcuts by Wilhelm Webels are now owned by collectors, public institutions and families. 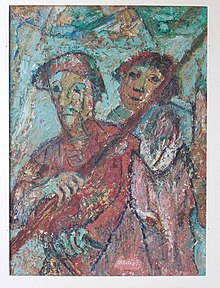 Wilhelm Webels, who grew up in his father's book printer, painted while he was still at school. His studies at the Folkwang School in Essen are shaped by Professor Josef Urbach, who is close to " Rhenish Expressionism ". In 1955, Webels started painting again and kept this passion until his death. After his first attempts at figurative painting, he dedicated himself to expressive realism . During this period he created around 900 paintings with oil and later with acrylic paints . The number of watercolors he painted should be around 180 to 200, for which he used acrylic paints diluted with water. The focus of all of his artistic works is the human being.

After Wilhelm Webels had been intensively involved in painting for 11 years, he began to cut sculptures from oak wood with hammer and chisel . He used old oak beams from a demolished 300 year old half-timbered house . He already learned modeling at the Folkwang School in Essen with Professor Joseph Enseling . Between 1965 and 1972 he created around 70 sculptures, between 1966 and 1969 he made 14 woodcuts from oak panels, using the rough wood structure as an artistic medium. A relationship to the acrylic paintings is unmistakable in the sculptures and woodcuts.

Works by Wilhelm Webels are among others. a. in possession of: