This article deals with the Auestadion in Kassel, Hesse. There is a stadium of the same name in Wesel, North Rhine-Westphalia .

The Auestadion is a football stadium inaugurated in 1953 and last renovated from 2003 to 2010 with an athletics facility in the North Hessian city ​​of Kassel in Germany . When it comes to football matches, it currently has space for 18,737 spectators, making it the largest stadium in North Hesse. It is a venue for football matches and athletics events, as well as concerts and cultural events. The stadium is particularly known as the venue for the KSV Hessen Kassel football club .

The Auestadion was built in the central part of the Südstadt district south of the city ​​center in the Kassel Fulda Niederung on the southwestern edge of the Karlsaue . It is not far from the intersection of the Ludwig-Mond-Straße - Am Auestadion / Frankfurter Straße at the southern end of Menzelstraße . Next door is the Kassel ice rink , the Auepark sports hall and a bowling center.

The Auestadion ( Damaschkestrasse 1 ) can be reached with motorized vehicles from the federal highway 49 (junction Kassel-Auestadion ) on the highway feeder Am Auestadion . At the third set of traffic lights, a spur road branches off to the right from the feeder road, which leads to the parking lot by the stadium, the ice rink and the large sports hall.

The stadium should preferably be visited by public transport because there are relatively few parking spaces. The Auestadion tram and bus stop is located a little west of the stadium on "Frankfurter Straße"; also tracks the Kassel Regiotram keep it there. On the forecourt immediately to the west of the stadium (at the northern end of Damaschkestrasse ) there is a request stop with two platforms; Trains stopping there also come from Frankfurter Strasse .

Considerations for the construction of a stadium began in 1948, which were realized with the start of construction in the early 1950s. The Auestadion was built on a former parade ground . For the standing grandstands - foundations about 100,000 m were three war rubble used from the Kassel's city center, consisting of the destruction during the Second World War came.

The interior of the stadium could be overlooked from every seat in the former main grandstand because the cantilevered steel structure roof was designed to be cantilevered; The same was previously only available in the Augsburger Rosenaustadion . That is why the Auestadion was groundbreaking for a long time. The main grandstand had exterior walls glazed on the sides and seats for around 2200 spectators. In the middle section, it contained a stand section for press employees and housed changing rooms in the substructure. The stadium was given a six-lane running track around the field.

The stadium stands as a monument of the 1950s under monument protection ; after the extensive renovation between 2003 and 2010, however, there is not much left of the building fabric from the post-war period.

On August 23, 1953, the Auestadion was opened in the presence of the Hessian Prime Minister Georg-August Zinn and the city celebrities. Immediately afterwards, the stadium opening game of the top division football teams KSV Hessen Kassel and Viktoria Aschaffenburg took place in front of around 20,000 spectators . Viktoria Aschaffenburg won 2-1.

The athletics facilities were completed in 1956 and honored with an inauguration ceremony on June 17, 1956.

From 1983 to 1993 the Auestadion was modernized for the first time when it was supplemented by two additional grandstands designed by Norbert Harle . They stand directly to the left (north) and right (south) of the main grandstand, are designed like this with a cantilevered roof and have seats for around 700 spectators each. In addition to the expansion of the grandstand capacities, a synthetic track and other athletic facilities were installed to ensure the future viability of the Auestadion for athletics competitions.

Since 2003 the Auestadion has again been in a modernization and renovation phase, with the original stadium character of a multi-purpose stadium (e.g. hosting football matches and athletics events) being retained.

The first phase of construction was completed in November 2006 with the completion of the newly built east stand, the roof of which was designed as a steel structure to match the main stand. It has around 4,700 seats and has a total of around 1,000 standing places in its edge or corner flag areas , which gives a total of 5,700 spectators. In addition, a tunnel leads from the warm-up and training area behind or directly to the east of the stadium under the seating rows into the interior of the stadium. At the inauguration of the east stand on November 25, 2006, a soccer match between KSV Hessen Kassel and FC Bayern Munich  II (1-1) took place.

The second construction phase took place from mid-2007 to 2009. The tartan track was expanded from 6 to 8 lanes, the standing stretches of the north and south curve were renovated and a floodlight system was installed; the floodlights were inaugurated on May 2, 2008 during a game against FC Bayern Munich II in front of 17,200 spectators. The planned modernization of the main stand did not take place because it was discovered at the beginning of 2009 that the concrete of the 50-year-old stand was dilapidated. In the same year the main grandstand was demolished and a new building was put out to tender.

When it was discovered during the planned renovation that the main stand had been built with poor quality concrete in the post-war period, the city of Kassel, as the owner of the stadium, decided to postpone the German athletics championships from 2010 to 2011 . For the same reason, the Askina Sports Festival was held in the Park Stadium Baunatal in 2009 .

The stadium forecourt was also renewed. The Kassel tram stop has been completely renovated and equipped with a platform. A video wall was first put into operation on July 13, 2011. The city of Kassel, the state of Hesse and KSV Hessen Kassel raised a total of € 400,000 for this. The German Athletics Association made the installation of the video wall as a condition for the award of the German Athletics Championships in 2011 .

The premises of the Sports Office of the City of Kassel are located below the south stand.

Football matches have been held in the Auestadion since it opened in 1953; in particular, it is the home stadium of KSV Hessen Kassel, which currently plays in the Lotto Hessenliga. To this day, the record number of spectators is the 37,000 who saw KSV Hessen's game against Hannover 96 in the promotion round to the Bundesliga .

So far, two times a finale of was German Cup held in Auestadion: 1958 , the continued VfB Stuttgart 4. 3 aet against Fortuna Dusseldorf by, and in 1959 won Schwarz-Weiss Essen with 5: 2 against Borussia Neunkirchen .

In the 1950s and 1960s, tens of thousands often came to the Auestadion for the games. At that time, KSV Hessen Kassel played for a few years in the Oberliga Süd , which was one of the five seasons of the top division in German football until the introduction of the Bundesliga in 1963. Similar attendance figures could be achieved in the 1980s, when the club played several times for promotion to the Bundesliga and failed each time.

From 1976 to 1979 the KSV Baunatal club played in the 2nd Bundesliga and played its home games in the Auestadion during this time.

In 1958, the German national soccer team played a test match against the B-Elf in the Auestadion. This game ended 1: 1.

Two international matches for the women's national team were played in the Auestadion . On September 27, 2001 they won the World Cup qualification against England 3-1, on May 29, 2008 they were able to win against Wales 4-0 in the European Championship qualification. Silke Rottenberg completed her last international match in the national team against Wales. On August 31, 2019, the women's national team won their European Championship qualifier against Montenegro by a clear 10-0.

On March 29, 2011, the German U-21 men competed against their Italian peers in the Auestadion in front of over 16,000 spectators (2: 2). The number of spectators meant a new record for U-21 friendlies in Germany.

The first international match under their new coach Stefan Kuntz was played by the German U-21 national team on September 2, 2016 against the U-21 selection from Slovakia, also in the Kassel Auestadion (final score: 3: 0).

In the year it opened (1953), the first international competition was held, the international athletics match between Germany and Denmark. Many other events followed, such as the very first European Athletics Cup in 1965 in which Soviet female athletes set two world records: Tamara Press with 18.59 m in the shot put and her sister Irina Press with 10.4 seconds in the 80-meter hurdles .

After the German schoolchildren's championships in September 1976, things got quieter. The athletics scene only got a little movement again when PSV Grün-Weiß Kassel started its meetings in 1987, from which the Askina Sports Festival (1998 to 2011; except 2009 and 2010) emerged. 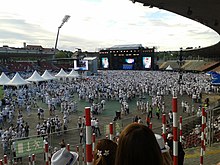 Just White as part of the Hessentag 2013 in the Auestadion

The semi-finals of the German field handball championship between SVH Kassel and TuS Lintfort were played in the Auestadion on October 18, 1959 in front of 30,000 spectators . Here the SVH lost with 12:13.

On July 4, 1964, 50,000 visitors came to the international music festival of the four nations USA, Belgium, England and Germany on the Hessentag .

After 46 years of existence, the first open-air concert was held in the Auestadion on June 26, 1999 , with pop singer Wolfgang Petry performing in front of over 25,000 fans.

On the Hessentag 2013 eight concert events took place in the Auestadion, among them most of the 30,000 spectators came to the Toten Hosen and the Just-White-Party.