Deron Quint as captain of the HK tractor Chelyabinsk (2015)

The 1.85 m tall defender began his career with the Seattle Thunderbirds in the Canadian Junior Western Hockey League before he was selected ( drafted ) in the 1994 NHL Entry Draft as 30th in the second round of the Winnipeg Jets .

Already in his rookie season in the NHL , the left-handed shooter played 51 games for the Jets, scoring five goals and 13 assists , although he did not have the reputation of an attacking defender before the season. He even managed to break the record of two goals in four seconds set by Nels Stewart ( Montreal Maroons ) in 1931 . Even after moving his franchise to Phoenix and the resulting renaming in Phoenix Coyotes , Quint was part of the NHL squad until he was transferred to the New Jersey Devils on March 7, 2000 in exchange for Lyle Odelein . Already on June 23 of the same year followed with the Columbus Blue Jackets, the third NHL station Quints, where he remained until the end of the 2001/02 season .

For one season returned Quint to the Coyotes back, his date last involvement in the NHL ended in 2004 with the Chicago Blackhawks during the lockout 2004/05 he played for HC Bolzano in the Serie A after 16 games in the National League A in the Kloten Flyers of Americans eventually switched during the 2005/06 season to Berlin.

With the Eisbären, Deron Quint was German champion in his first DEL season , after the end of the regular season 2006/07 he was the third best scorer among the DEL with 46 points behind Jame Pollock ( Nürnberg Ice Tigers ) and Stéphane Julien ( Kölner Haie ) Defenders. After the polar bears were eliminated in the playoff in the 2006/07 season , Quint was loaned to the New York Islanders for the last 5 regular season games. In the following season , however, the defender ran again for the polar bears.

Despite a contract until 2010, he moved to the Continental Hockey League at Neftechimik Nizhnekamsk after the 2008/09 season . In 2010 he was signed by league rivals HK Traktor Chelyabinsk and was the most dangerous defender of the KHL in the 2010/11 season with 21 goals. During the 2012/13 season he was invited to the KHL All-Star Game .

From May 2013 Quint was under contract with HK Spartak Moscow . After it was determined that Spartak would miss the play-offs of the 2013/14 season, the club Quint gave in mid-January 2014 in return for a compensation payment to HK CSKA Moscow , for which he completed 12 missions until the end of the season. He then returned to HK Spartak, as the latter ceased playing due to financial difficulties, and Traktor Chelyabinsk Quint signed in July 2014.

In the 2016/17 season he was under contract with EHC Red Bull Munich in the German Ice Hockey League and won another German championship title with the Red Bulls . 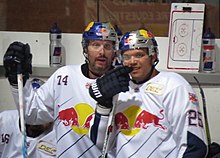