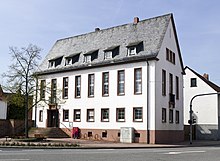 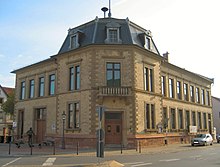 Dornheim is a district of the southern Hessian district town Groß-Gerau .

Dornheim is located approx. 4 km south of the core town of Groß-Gerau in the Hessian Ried .

The oldest surviving mention of Dornheim - as Thornheim - can be found for the year 779 in the Lorsch Codex : A Uoda donated her inherited property in Dornheim and other places to the Lorsch Monastery for her salvation .

In historical documents Dornheim can be found in the following centuries with the following spellings: Thorheimono, in terminis (818), Dornheim, villa (1184), Dornheym (1327) and Dornheim (1327).

Eberbach Monastery, which is very wealthy in the area , maintained a large farmyard in Dornheim, the Riedhäuserhof, mentioned in 1159 as Villa Rihusen . The Counts of Katzenelnbogen , Kurmainz and Kurpfalz are named as other landowners in Dornheim .

Dornheim local nobility has been known since the 12th century. Until it was pledged to Count Diether V von Katzenelnbogen by Wilhelm von Holland in 1249, Dornheim was an imperial village , and the residents were exempt from compulsory labor.

In 1479 the Counts of Katzenelnbogen died out. The Landgraves of Hesse were heirs .

The first court seal , later the template for the coat of arms, was introduced in 1543.

When the Landgraviate of Hesse was divided under the heirs of Philip the Magnanimous in 1567, Dornheim came to the Landgraviate of Hesse-Darmstadt . Even its first regent, Georg I , caused the Landrecht collection of the Upper County of Katzenelnbogen , compiled by his Chancellor, Johann Kleinschmidt , to become legally binding there. She was in Dornheim as a particular law , subsidiary supplemented by the Common Law , to the end of the 19th century. It was not until January 1, 1900, when the Civil Code , which was uniformly valid throughout the German Reich , that the old particular law was suspended.

The statistical-topographical-historical description of the Grand Duchy of Hesse reports on Dornheim in 1829:

»Dornheim (L. Bez. Dornberg) Lutheran parish village; is located on the old Nekar bed, 3 ⁄ 4  St. from Dornberg, has a beautiful church, 138 houses and 932 inhabitants, all of which are Lutheran except for 5 Catholics, 7 Mennonites and 53 Jews. There are peat graves here. - Dornheim used to be an imperial village, which King Wilhelm pledged to Count Diether von Katzenellenbogen in 1248, which pledge was not redeemed. The parish probably owes its origin to the old Wetterau Counts of Nuringen. Before the Reformation, Dornheim had 2 churches. The main church was in front of the place and burned down by a ray of weather. The other was in the village and became the main church after the fire of the former. In 1597 a larger one was built in its place. "

In the early modern period, the functions of administration and jurisdiction were combined in the " office " at the lowest level , including the Dornberg office , which existed until 1821.

In the Landgraviate of Hessen-Darmstadt, the judicial system of the two higher authorities was reorganized with an executive order of December 9, 1803. The offices remained the first instance of justice in civil matters . For the Principality of Starkenburg , the “Hofgericht Darmstadt” was set up as a court of second instance for civil matters. In the first instance it was also responsible for civil family law and criminal matters . The higher appeal court in Darmstadt was superordinate to it .

With the administrative reform of 1821, courts in the Grand Duchy of Hesse were also created at the lowest level, which were independent of the administration. The district court Großgerau was now locally responsible for Dornheim . With the reform of the Reich judiciary , which took effect on October 1, 1879, it was renamed " Groß-Gerau District Court ".

The following list lists the administrative units to which Dornheim belonged:

In 2016 Dornheim took part again in the " The circle rolls " campaign , which takes place every two years . The bicycle route ran right through the town, the B44 was closed to car traffic. Many associations and institutions took part with stands and exhibitions. Dornheim had already participated in 2012.

Riedhalle Dornheim with the "3 Graces" and the club tree

Dornheim is located on Bundesstraße 44 and can also be reached by bus in public transport .

Dornheim is also on the Mannheim – Frankfurt am Main railway line (“Riedbahn”). There is the former train station and today's stop at Groß Gerau-Dornheim. Its entrance building is a type building from 1905 in neo-baroque forms. It is a cultural monument due to the Hessian Monument Protection Act . The stop serves the S-Bahn line S7 of the S-Bahn Rhein-Main .