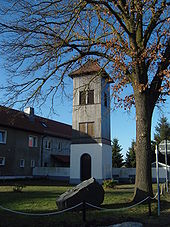 Frauendorf is a municipality in the Oberspreewald-Lausitz district in Brandenburg . It belongs to the Office Ortrand with its seat in Ortrand .

Frauendorf is located in Upper Lusatia, west of the Pulsnitz , which is the border with the Schraden . To the west of the village are places of the Ortrand office - Tettau in the northwest and Lindenau in the southwest. To the south of Frauendorf is the town of Ortrand with the district of Burkersdorf . The municipality of Kroppen borders in the southeast . To the east is Arnsdorf and to the northeast is the city of Ruhland . The Schwarze Elster flows north of the municipality . Also to the north are the so-called heather houses that belong to the community.

To the east of Frauendorf there is a pond landscape consisting of the Elseteich, Theresienteich and Louisenteich.

The residential areas Heidehäuser and Weidmannsruh belong to the community .

The street village of Frauendorf was first mentioned in 1366. It is probably a foundation of the Naumburg bishopric. The place name means village of our lady and thus refers to the Mother of God Mary. The name developed from Vrauwendorff in 1406 to Frawindorff by Ruland in 1430 and Frawendorff in 1518 to Frauendorff in 1551.

Frauendorf was on an old trade route from Bohemia to the Baltic Sea. The bridge toll had to be paid at today's Bärhäuser . The manor Frauendorf, which was first mentioned in 1518, exercised the manorial rule over Frauendorf. In the Oberlausitz pattern register on January 2, 1551, the von Rosenhagen family is named as the owner of Frauendorf. Frauendorf was parish in Kroppen since 1540. In the 17th century the Lindenau church was moved to Frauendorf. After the Frauendorfer Church was blown over by a storm in 1660 or 1661, the village owner Bernhard von Könritz had it rebuilt in 1671.

In the Frauendorfer church chronicle, the royal Saxon minister Detlev Graf von Einsiedel is listed as a further owner. In the fall of 1871, the Einsiedel heirs sold all of the properties. The school building that is now used as a kindergarten was built between 1900 and 1902.

On 19 May 1974 Ms. village was shared with the neighboring Lindenau after Tettau incorporated. On May 6, 1990, both were spun off from Tettau and became independent communities. Since 1992 they have belonged to the Ortrand office.

The community council of Frauendorf consists of eight community representatives and the honorary mayor. The local election on May 26, 2019 resulted in the following distribution of seats:

In the mayoral election on May 26, 2019, Friedrich was elected unopposed with 93.7% of the valid votes for a further five-year term.

On the night of December 25-26, 1909, the church fell victim to the flames. In 1920, the Lauchhammer stock corporation donated the bell tower, which is still standing today, to the Frauendorf community. On June 21, 1992 the congregation got a new parish hall. There is also a small park. In front of the entrance to the parish hall there is a protected oak tree .

In the center of the village there is a war memorial for the fallen of the First World War with memorial plaques for the victims of the Second World War. There is a stone cross next to the war memorial.

The Friedensplatz, which was redesigned in 2001, has benches and a handle pump.

Frauendorf is on the K 6606 district road between Tettau and Ortrand . The junction Ortrand of the A 13 Berlin – Dresden is about 5 km away.

Cities and municipalities in the Oberspreewald-Lausitz district