The title of this article is ambiguous. Further meanings are listed under Schwarzheide (disambiguation) .

Schwarzheide is located in the south of the state of Brandenburg , about 50 km north of Dresden and 110 km south of Berlin . The urban area is located north of the Schwarzen Elster in the lowlands of Niederlausitz . In the eastern part of the city the river Pößnitz flows .

Immediate neighboring communities of the city are Schipkau (north), the city of Senftenberg with the district Brieske (northeast), Schwarzbach (east) and the cities of Ruhland (south) and Lauchhammer (west).

Schwarzheide is divided into the residential areas

Church planting and history of the districts

The water tower, the symbol of the city

Environmental protection water analysis in the laboratory of the VEB Synthesewerk Schwarzheide , 1990

Today's industrial community Schwarzheide was created on October 1, 1936 through the merger of the two previously completely independently developed communities Zschornegosda (today Schwarzheide-West) and Naundorf (today part of Schwarzheide-Ost). The name of the city arose in the course of the Germanization of place names from the free translation of the Sorbian name of the place "Zschornegosda" ( čorny = black, gozd = heather, forest).

The time of the establishment of the place is not known. The villages of Zschornegosda and Naundorf were probably founded in the course of Christian proselytizing in the course of the 12th and 13th centuries. However, such small villages were only mentioned in writing when certain rights or obligations were laid down for them vis-à-vis the respective sovereigns or church representatives.

The first written evidence of Naundorf (as Nuwendorff ) comes from a pledge from 1421. Zschornegosda was first mentioned in 1449 (as Cschörnegast ) in the feudal deed of Duke Friedrich of Saxony . While Naundorf, located at a crossing point between the Schwarzen Elster and the town of Ruhland , was a typical street village , the original fishing village of Zschornegosda was, in contrast to the Slavic Rundlingen typical of the area , a so-called riding village . It consisted of a strongly curved row of farmsteads, which opened to the northeast around the chapel of the village. The chapel itself stood on the highest point of a flat sand dome, today's village meadow. The then about 20 properties of the farmers, the court riding, were areas of about 25 x 300 meters, the front side facing towards the chapel.

The development of the two villages was repeatedly hindered by looting as a result of wars, large fires and epidemics. Until the 18th century the number of inhabitants was barely more than 100. A pitch hut (1673), which made pitch from pine wood to seal the fishing boats, wagon grease, charcoal and soot, as well as an iron hammer (1725), the origin of today's Lauchhammerwerk , were up to now the only major industrial settlements in the immediate vicinity.

After the first finds of raw lignite west of Zschornegosda on the Bockwitzer Flur around 1780, its mining (above ground) on a large scale did not begin until about a hundred years later, as a result of which the first briquette factories were founded (Ferdinand, Victoria, Victoria II). With the accompanying straightening and sewerage of the Black Elster in order to allow the resulting pit water to drain better, the natural floodplain landscape and the associated abundance of fish also disappeared, so that fishing, which was once the most important branch of business, disappeared completely. For the new industry, the brown coal and briquette industry AG , or BUBIAG for short, had a settlement built near the Wandelhof after 1900 , which was completed in 1920. The Bürenhof residential complex , today Hugo-Wolfram-Platz, was added as early as 1921 as an employee housing estate in Zschornegosda / Schwarzheide-West. The Victoria settlement in Schwarzheide Ost was also built around 1900.

In order to be able to produce gasoline independently of oil imports during a war, the Ruhland hydrogenation plant (later called the Schwarzheide hydrogenation plant ) was built north of the city north of the city by the brown coal-gasoline company ( BRABAG ) , which produced gasoline from brown coal using the Fischer-Tropsch synthesis . Together with the construction of the industrial facilities, today's federal motorway 13 and the numerous apartments of the workforce were created as a Wandelhof and water tower settlement. The residential development was designed by the architects and landscape planners Gustav Allinger , Alfred von Bodisco and Walther Stridde in the style of the garden cities of the 1930s. The concept also included a city center around today's Schillerplatz, after later planning on the Wasserturmplatz. This part of the plan was not completed by the war.

From July 1944 to April 1945, the Schwarzheide subcamp was located in the north-east of the city , a forced labor camp of the Sachsenhausen concentration camp , whose approximately 1,000 mostly Czech Jews had to work mainly to maintain the production of the BRABAG plant. Only about 600 prisoners survived the heavy and sometimes life-threatening work, of whom only about 200 survived the death march to the Theresienstadt concentration camp in May 1945 .

Due to the strategic importance of the BRABAG works, the city was partly destroyed by numerous bomb attacks during the Second World War . As a result, there are hardly any buildings from the time before 1945 in the city and its surroundings, with the exception of the water tower settlement, for example, while several duds weighing several centimeters are still recovered every year . As a result of the Potsdam Agreement , the BRABAG plant became a Soviet state stock corporation (SAG) and served the reparations payments to Poland and the Soviet Union . It was not until January 1, 1954 that the SAG plant was handed over to the GDR as VEB Synthesewerk Schwarzheide .

As a result of the German reunification of 1990 , the synthesis Schwarzheide plant was one of the first operations of the Trust Agency with more than 6,000 jobs by the BASF SE BASF Schwarzheide GmbH acquired. With the decline in lignite mining, BASF Schwarzheide is today (2019) the largest employer in the region with around 1,800 direct and 1,650 indirect employees, including numerous suppliers. As of 1996, BASF's own housing company SEWOGE GmbH modernized part of the historic Wandelhofsiedlung in accordance with listed buildings. The apartments were sold in 2012.

The course of the river Black Elster forms the border between Lower and Upper Lusatia , which have belonged to the Kingdom of Bohemia as neighboring countries since 1367 . From 1635 both villages belonged to the Electorate of Saxony . In 1815, both places became parts of Prussia and its province of Brandenburg as a result of the Prussian division of the Kingdom of Saxony as part of the Congress of Vienna as a result of the Saxon participation in the Napoleonic Wars. Between 1818 and 1952, Zschornegosda and Naundorf near Ruhland and from 1936 the municipality of Schwarzheide belonged to the district of Calau .

After the dissolution of the federal states and the reorganization of the districts in the GDR in 1952, Schwarzheide came to the Senftenberg district in the Cottbus district . Since the restoration of the states in 1990, the city has belonged to the state of Brandenburg and since the regional structural reform of December 6, 1993 to the Oberspreewald-Lausitz district .

The city council of Schwarzheide consists of 18 city councilors and the full-time mayor. The local election on May 26, 2019 resulted in the following distribution of seats: 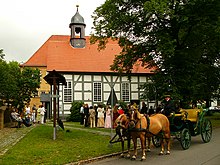 The town's landmark is the 36 m high water tower, which was originally planned as a town hall tower and was built in 1943/44 mostly by French prisoners of war. With its completion, the water shortage in Schwarzheide that began with the construction of the BRABAG settlements also ended. The Schwarzheider water tower only lost its function in 1958 with the construction of the Tettau waterworks , the water ring main and the water tower in Lauchhammer-Ost . As the central point of the city, the tower was completely restored in 1994 and a modern plastic fountain (Die Welle) was added to its forecourt . In addition, there is the listed Luther Church from 1754 in the city . The BASF gallery offers the opportunity for exhibitions and events. Schwarzheide has East Germany's oldest large-capacity disco , the Wandelhof amusement park and a cinema with four halls with a total of 650 seats. A city chronicle - city history in 10 panels - is located in Ruhlander Straße by the cemetery wall (inaugurated on September 6, 2017). 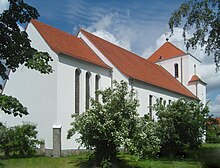 Large-scale pine forests, lakes, meadows and pastures can be found in the immediate vicinity of Schwarzheide. The wooded, renatured high tip offers a wide view of the south of the Lower Lusatian region on a clear day. Numerous cycle paths allow you to explore the Lower Lusatian nature and also lead through the large recreational areas of the Lusatian Lake District and the Spreewald .

The largest resident industrial company is BASF Schwarzheide GmbH (emerged from the VEB Synthesewerk Schwarzheide ), which is also the largest employer in the region. On the periphery of the chemical company and in the southern industrial area there are some medium-sized (Fränkische Rohrwerke, PeinigerRöRo) and numerous smaller companies. The business location is one of 15 regional growth centers in the state of Brandenburg. This promotes selected future-oriented industries.

Schwarzheide is located on federal highway 169 , the "Lower Lusatia route", between Elsterwerda and Senftenberg . The A 13 Berlin – Dresden motorway crosses the city, the Schwarzheide and Ruhland junctions are on the city's territory.

The Schwarzheide Ost stop on the Großenhain – Cottbus line is served by the regional train line RB 49 Falkenberg (Elster) - Cottbus .

A branch of the Finsterwalde – Schipkau railway line runs through Schwarzheide.

In the north of the town is a special airfield , the airfield Schwarzheide-Schipkau .

In Schwarzheide there is a primary school (Schwarzheide-Wandelhof), a grammar school (named after Emil Fischer ), a department of the Lausitz Upper School Center (OSZ) for training laboratory technicians , chemical technicians , car mechanics , body builders and process control electronics technicians, as well as a music school.

In the Kultur- und Heimatverein Schwarzheide eV Dorfaue 3 there is a permanent exhibition on the history of the city of Schwarzheide. It shows the beginnings from 1449 to the founding of the city in 1967.

The Eurospeedway Lausitz is located in the immediate vicinity of the city . BSG Chemie Schwarzheide will represent Schwarzheide in the Südbrandenburg regional league in the 2019/2020 season .

Cities and municipalities in the Oberspreewald-Lausitz district