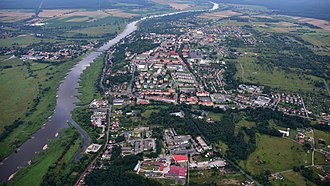 The place was first mentioned in the chronicle of Thietmar von Merseburg as castrum Crosno in 1005 , when the Polish Duke Bolesław I was besieged by King Henry II . Boleslaw's son Mieszko II defeated the emperor's Bohemian allies in the Battle of Crossen in 1015 .

Silesian rule in the 12th and 13th centuries

After the reinstatement of the sons of Duke Władyslaw II the expellee in their rights in Silesia in 1159, Crossen came to the Duchy of Wroclaw . Duke Heinrich I the Bearded had the castle expanded, the Marienkirche built and a fortification built. During this time, the Dominican monastery was probably built and the place received city rights. In 1238 Heinrich the Bearded died in Crossen. His body was transferred to Trebnitz and buried in the local monastery church. In 1241 the Trebnitz nuns, among them St. Hedwig and Duchess Anna , wife of Heinrich II , fled to Crossen from the Mongol invasion from Trebnitz and Liegnitz . After Heinrich II's death, he was followed in the government by the eldest son Boleslaw , who in 1251 had to cede the Glogau area to his younger brother Konrad .

Crossen was pledged to the Brandenburg Ascanians in 1277 and Johann II held the title of Herr von Krossen . In 1314 the Ascanians returned Crossen to the dukes of Glogau in exchange for areas around Züllichau .

Around 1272 a monastery of the Franciscan Order , founded in 1210, was built in Crossen , which belonged to the Saxon Franciscan Province ( Saxonia ). It was abolished as a result of the Reformation around 1540.

In 1537 the city and duchy finally came under the electorate of Brandenburg, but still under Bohemian suzerainty. Since then the electors have also called themselves dukes of Silesia and Crossen and included the Silesian eagle in their coat of arms.

Wars in the 17th century

In the Thirty Years' War the city was set on fire by the Swedes in 1631 and destroyed including the castle and St. Mary's Church. The rebuilt city was plundered and destroyed several times between 1634 and 1642 in the battles between the Swedes and the Brandenburgers.

Industrial boom in the 19th century

In 1815, as a result of the Prussian administrative reform, Crossen became a district town in the Frankfurt administrative district . Between 1830 and 1880 there was a hesitant and slow development of industry, especially the wood and meat processing industries. It was not until 1870 that Crossen was connected to the Prussian railway network with the Guben – Bentschen line of the Märkisch-Posen Railway Company. A branch line to Sommerfeld followed later . In 1886 a hurricane raged over the city. The architect Karl Otto Schwatlo built the post office on behalf of the Reich Postal Administration in 1897.

At the beginning of the 20th century, Crossen had three Protestant churches, a Catholic church, a secondary school, a wine and fruit growing school and was the seat of a local court . After the First World War, the metal industry developed in Crossen, while viticulture, which continued into the 19th century, became a hobby for individuals. In 1939 Crossen had 10,800 inhabitants.

Towards the end of the Second World War there was heavy fighting between the German Wehrmacht and the Red Army in and around Crossen in February 1945 . 499 houses and thus 65 percent of the building fabric of the city were destroyed. The Red Army placed the German areas on the right of the Oder-Neisse border under the administration of the People's Republic of Poland from March / April .

Since the end of the Second World War in May 1945

After the end of the war, the local population began to be expelled and Poles settled . A year later the number of Poles had grown to around 2,000. Crossen was renamed Krosno Odrzańskie . From 1955 onwards, the city began to develop slowly.

There was a Jewish population group in Crossen. In 1851 a synagogue was built, which was destroyed in 1938.

The population in the area of ​​the city was Slavic or Polish in the early Middle Ages. Since the 13th century, this mixed with German immigrants and assimilated. It is known from 1525 and 1605 that a Slavic chaplain worked in the city.

Until the early 18th century, especially in the villages around Crossen, some residents spoke an Eastern Lower Sorbian dialect .

Parishes in the Powiat Krośnieński