from Wikipedia, the free encyclopedia
This is the spotted version , flagged on August 5th, 2020 . There is 1 pending change that has yet to be viewed.

The uterus or uterine ( lat. Uterus , matrix ; Greek. Mētra , Hystera , DELPHYS ; medium high German bërmuoter and short muoter ) is the part of the female sex organs in which after one, Conception the early embryonic stages ( blastocyst ) settle and birth tire Developing fetus . The fertilization of the haploid egg cell to form a diploid zygote had already taken place in the fallopian tube. The uterus extends from the external cervix to the opening to the fallopian tube and consists of three parts: the cervix, the isthmus, and the body of the uterus. With its pronounced muscle layer, it participates in the expulsion of the child during birth.

All female mammals and numerous other live-bearing ( viviparous ) vertebrates have paired or unpaired uteri.

The technical term intrauterine means “within the uterus”. The opposite is extrauterine .

Schematic structure of the uterus

The uterus was first described in more detail, if not anatomically correct, by Galenus . Galen described a two-part uterus that was supposed to be warmer on the right than on the left and, in terms of humoral pathology , as can already be found in Parmenides and in the Hippocratic writings , the explanation for the development of male offspring in the right uterine chamber. From the 12th to the 15th centuries the scholastic idea of ​​a seven-chambered uterus spread.

In principle, the uterus is a hollow organ that resembles an upside-down pear. It is about seven centimeters long, five centimeters wide, two to three centimeters thick and weighs 30 to 120 grams. However, size and weight can vary significantly. The uterus consists of three parts: the lowest part is the cervix ( cervix uteri ); it is joined by the isthmus and the actual body of the uterus ( corpus uteri ). The cervix surrounds the cervical canal ( Canalis cervicis ), which begins with the external cervix ( Ostium uteri externum ) and ends with the internal cervix ( Ostium anatomicum uteri internum ). The outer cervix is located at the portion of the cervix, into the vagina ( vaginal bulge), the vaginal portion of the cervix ( portio vaginalis uteri , or short cervix ). The part of the cervix that sits above the vaginal part is called the portio supravaginalis uteri (roughly German: uterine part above the vagina). At its end is the inner cervix, which is the narrowest point in the cervical canal with a diameter of two to three millimeters. The cervix is ​​then connected to the body of the uterus via an equally narrow transition zone. This transition zone is called the isthmus uteri and is actually still included in the cervix. The isthmus is about five to ten millimeters long and surrounds the isthmus canal ( Canalis isthmi ) inside . The adjoining uterine body represents the largest part of the uterus with two thirds. The lumen (interior) of the uterine body ( Cavitas uteri ) is roughly triangular when viewed from the front with two lateral edges ( Margo uteri ). At the top laterally the body of the uterus merges into the fallopian tubes and at the top it ends with the tip of the uterus ( fundus uteri ). If you look at the body of the uterus from the side, however, it only resembles a narrow gap, as its anterior and posterior walls ( facies anterior and facies posterior ) lie against one another.

In the side view of the vicinity of the uterus (will uterus ) to the adjacent organs, the urinary bladder ( bladder ) and rectal ( rectal ) significantly.

The exact location of the uterus, however, varies depending on the filling level of the surrounding organs, i.e. the urinary bladder and rectum.

Fastenings of the uterus

The blood supply to the organ takes place on each side via the uterine artery ( Arteria uterina ). The uterine arteries emerge from the internal iliac artery ( internal iliac artery ) and run in the ligamentum latum , where they cross the ureter , to the cervix. There it gives off some branches to the vagina ( rami vaginales ) and otherwise meanders along the lateral edge of the uterus up to the top of the uterus. This meandering is important so that the artery can stretch sufficiently if the uterus enlarges during pregnancy. Once at the top of the uterus, the uterine artery gives off one branch to the tube ( Ramus tubarius ) and one to the ovaries ( Ramus ovaricus ). This Ramus ovaricus connects ( anastomoses ) with the ovarian artery ( Arteria ovarica ).

The blood first flows into a wide-meshed network of veins in the uterine wall ( plexus uterinus ), which often also absorbs the venous blood from the vagina. The ureteric plexus opens into the uterine vein ( vena uterina ) and further into the inner pelvic vein ( vena iliaca interna ).

The uterus is innervated by nerves from the lower abdominal plexus ( inferior hypogastric plexus ). The branches of this plexus form the uterovaginal plexus ( Franckhauser plexus ) on both sides of the uterus . The sympathetic parts originate from the small visceral nerve ( Nervus splanchnicus minor ), the lowest visceral nerve ( Nervus splanchnicus imus ) and the Nervi splanchnici lumbales . These fibers are switched partly in the ganglia mesenterica ( ganglion mesentericum superius and ganglion mesentericum inferius ), partly in ganglion cells , which lie directly in the nerve plexus itself. The parasympathetic components, on the other hand, come from the pelvic splachnic nerves and switch either directly in the organ wall or in the plexus . 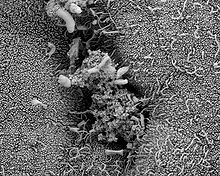 Endometrium with gland opening from a bitch, SEM image. Numerous microvilli can be seen on the surface of the epithelial cells .

Like all hollow organs, the uterus is made up of three layers. Outside is the perimetrium, a smooth, shiny coating of the serosa . The main part of the wall is a layer of smooth muscle called the myometrium. The inner lining is a mucous membrane called the endometrium . The inner cavity is called the Cavum uteri .

Cyclic changes in the endometrium

In the proliferation phase , controlled by the hormone estrogen, the build-up of the stratum functionalale starts from the stratum basale. The glands proliferate and arteries grow in a spiral shape into the newly emerging layer, one speaks of spiral arteries .

Change in size during pregnancy

The proliferation phase is followed by the secretion phase, initiated by the hormone progesterone . The glands in the endometrium take on a serrated, saw-blade shape and the gland cells begin to secrete proteins and mucus. In the first half of the secretion phase, a retronuclear vacuole is visible in the lower half of the cell under the nucleus when viewed in a normal microscopic specimen . There was before the tissue fixed was glycogen . Furthermore, in the vicinity of the arteries in the stratum compactum, pre-decidual cells, precursors of decidual cells, develop in the placenta that forms when an embryo is implanted.

If fertilization does not occur during this period, the desquamation phase follows, which is triggered by falling estrogen and progesterone levels. The spiral arteries contract, causing ischemia in the stratum functionalale . This layer is broken down and detached through an inflammatory reaction.

Then menstruation occurs in primates . Non-primates also show cyclical changes in the uterine lining over the course of the sexual cycle . However, they do not have menstruation.

Changes in the endometrium during pregnancy

With fertilization and successful implantation of the fertilized egg cell ( zygote ), more precisely the blastocyst , the uterine lining continues to grow and ensures the supply of the growing embryo . After birth , the uterine lining in primates is expelled with the placenta as the afterbirth .

In terms of evolution , the uterus arises from the paired Müller duct , with the left and right in humans and other primates merging to form a single hollow organ ( uterus simplex ).

If this fusion does not take place completely, this is the cause of various uterine malformations . Failure to fuse leads to double formation of the uterus, accompanied by a malformation of the vagina with the formation of a partition there as well ( uterus duplex et vagina duplex ). An incomplete fusion (with no fusion of the upper section of the Müller ducts) leads to a bicornuate uterus ("two-horned uterus") with a single or double cervix and with or without a vaginal septum. The so-called uterus arcuatus can be seen as a weakened form of a uterus bicornis .

The uterus is relatively small prepubertal, becomes 5–10 cm in size after puberty and expands strongly upwards and to the sides during pregnancy . At the end of pregnancy, it reaches to the ribs. After the delivery, it will shrink again. After menopause , it gets smaller again.

The uterus as an organ is established according to Leyendecker et al. (1998) and Noe et al. (1999) composed of two different tissue systems, the inner "archimetra" facing the cavum uteri and the outer "neometra". Phylogenetically and ontogenetically, the inner archimetra or the endometrial-subendometrial unit represents the oldest part of the uterus. It consists of the epithelial and stromal part of the endometrium and the muscles immediately below with smooth muscle fibers that are predominantly circular. This layer of smooth, circular muscle fibers begins caudally at the level of the lower cervix uteri and runs through the corpus uteri as a stratum subvasculare and continues over the uterine horns (cornua uteri) as tubular ring muscles in the fallopian tubes . The "archimetra" is formed relatively early in the embryonic development through the melting of the Müllerian ducts . This fusion process creates a zone of intersecting muscle fibers in the midline, also known as "fundo-cornual raphe", i.e. exactly where the circular muscle fibers diverge from the middle part of the uterus into the respective uterine horns and continue into the fibers of the fallopian tubes. The archimetra is a functional unit controlled by the ovary and consisting of the endometrium and subendometrial muscles. The “archimetra” is already present as a functional layering of the uterus in the basal terrestrial vertebrates. They are very old in tribal and evolutionary terms. The archimetra takes on functionally tasks in the early stages of reproduction. In addition to the implantation of the fertilized egg with the necessary structure of the uterine lining, it is also about uterine peristalsis and the defense against inflammation in the internal female genitalia.

The "neometra" consists of the outer muscle layer, the stratum supravasculare with mainly longitudinally arranged, smooth muscle fibers that radiate into the uterine ligaments and fix the uterus to the bony pelvic wall and the stratum vasculare. The function of the neometra is to expel it during childbirth . While the functions of the "archimetra" are mainly regulated by the ovary , the functions of the "neometra" are mainly controlled by the embryo or fetus .

The first living donor a uterus in humans was in 2013 at the Sahlgrenska University Hospital in Gothenburg ( Sweden performed). Since then, several children have been born in different countries who were carried to term in a transplanted uterus. Sometimes women have had two children after a transplant.

In December 2018, it was first announced that the uterus would be transplanted from a dead woman to a woman who was born without a uterus. Eight egg cells from this woman were fertilized and frozen using in vitro fertilization , then her uterus was implanted, and her eggs were inserted months later. The child she carried was born by caesarean section and the implanted uterus was removed at the same time.

In most mammals merges only a part of during fetal development Mueller courses into a compact body of the uterus ( corpus uteri ). The part referred to as the front section in animals is created in pairs from the start, which is also referred to here as the bicornuate uterus ("two-horned uterus"). Such a bicornuate uterus with two uterine horns ( cornua uteri ), for example, is possessed by all predatory and ungulate animals .

In birds , the “uterus” is the section of the oviduct in which the calcareous shell is formed.

Diseases of the uterus are called metropathies . In detail, this means: