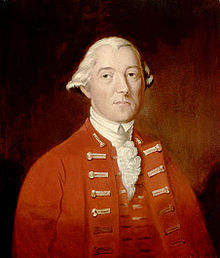 Guy Carleton, 1st Baron Dorchester KB (born September 3, 1724 in Strabane , County Tyrone , † November 10, 1808 in Bisham , Berkshire ) was a British general who served as governor of the province of Québec .

He came from a family of the Northern Irish gentry and was the third son of Christopher Carleton († 1738), lord of Newry in County Down .

On September 24, 1766 he was appointed deputy governor of the province of Québec, and took over the administration of this colony himself as governor in 1768 after the dismissal of the governor General Murray . During 1770 he took a leave of absence and traveled to England . On April 2, 1772 he was appointed Colonel of the 47th Regiment of Foot and on May 25, 1772 promoted to Major-General . As Governor of Québec, he personally campaigned before the British House of Commons in 1774 for the enactment of the Quebec Act , which led to better relations between French and British Canadians and made a decisive contribution to Canadians' loyalty to the British Crown during the American Revolutionary War .

When General Gage relinquished supreme command of British troops in America in June 1775, command was split. Carleton was in command of Canada and General Howe was in command of everything south of it. In the fall of 1775, Carleton, who at the time had few troops, was confronted with an American invasion . In October 1775 he defeated an American flotilla in the Battle of Valcour , but could not prevent the Americans from taking Fort St. John and Montreal in November 1775 . Carleton himself barely escaped from Montreal to the city of Quebec and organized the defense there. He fought back the American attack under Richard Montgomery and Benedict Arnold in the Battle of Québec on December 31, 1775 and survived the long winter siege of the city until, in May and June 1775, considerable British troops arrived by sea as reinforcements and the retreat of the Americans from Canada effected. On March 26, 1776, he was promoted to general , only for America, knighted as Knight Companion of the Order of the Bath on July 6, 1776 , and promoted to Lieutenant-General on September 6, 1777 . In May 1777 he was replaced as commander-in-chief in Canada by General Burgoyne and then asked for his recall as governor, which took place gradually on September 20, 1777 and April 21, 1778. In his native Ireland, he was appointed governor of Charlemont Fort , County Armagh , in February 1778 , an office he held until his death.

On February 23, 1782 Carleton was appointed Commander in Chief of the British Forces in North America, after which he returned to America in May 1782 and held this office until November 1783. In recognition of his achievements, he was raised to hereditary peer on August 21, 1786 as Baron Dorchester , of Dorchester in the County of Oxford , and thereby became a member of the House of Lords . In 1786 he was reinstated as governor of the Canadian provinces of Québec, Nova Scotia and New Brunswick . Against the background of the French Revolution and US attempts to stir up a mood against British rule, he tried to maintain the loyalty of the Canadian people and ensured the constitutional law of 1791 . In 1796 he retired and returned to England.

On May 22, 1772 he married Lady Maria Howard († 1836), third daughter of Thomas Howard, 2nd Earl of Effingham . With her he had nine sons and two daughters, of whom the following five children reached adulthood:

When he died in 1808 at the age of 82, his grandson Arthur Carleton , the only son of his third son Christopher, inherited his title of nobility as 2nd Baron. Since this remained childless, Guy Carleton , the eldest son of Charleston's youngest son Richard, followed him as 3rd Baron in 1826 .

The following places are named after him:

Governors and Vice-Governors of the Province of Quebec