He was mostly used as a central defender, but also played as a full-back and in defensive midfield. In his active career he played in the Bundesliga and played 312 games in the top German division. Westermann also played from 2015 in the top leagues in Spain, the Netherlands and Austria. Furthermore, he ran 27 times for the German national team and became vice-European champion with her in 2008.

Westermann was born in Wasserlos , a district of Alzenau in Lower Franconia , and attended elementary school in Schimborn . He started playing football in 1988 at SG Schimborn . Via 1. FC Hösbach and FC Bayern Alzenau he went to SpVgg Greuther Fürth in 2000 , where he began his senior career when he received a contract for the second team. In 2002 he joined the professional team that was playing in the 2nd Bundesliga at the time. There he soon became a regular player before moving to Arminia Bielefeld in the Bundesliga for the 2005/06 season. Because of an injury to Petr Gabriel , he was a regular from the start. On the 9th matchday of the 2005/06 season he scored his first Bundesliga goal in the home game of Arminia against Hertha BSC (3-0).

On July 1, 2007, Westermann moved to FC Schalke 04. At the beginning of the season he played several games in the position of central defender after an injury to Mladen Krstajić . He then convinced as a substitute for Christian Pander as a left full-back, including in the Champions League game against Chelsea . In the game at Eintracht Frankfurt he scored his first two goals for his club on December 8, 2007. At the beginning of the 2008/09 season he was initially called up as a right defender at his club as a replacement for Rafinha . He then played a number of good games in defensive midfield and emerged as a goalscorer several times, which prompted the coach to let him play there ever since. He scored his first goal in an international match on September 16, 2008 in the UEFA Cup match at APOEL Nicosia . In the 2009/10 season, coach Felix Magath appointed him team captain . He held this position for a year until he moved to Hamburger SV . His contract ran until June 30, 2014. 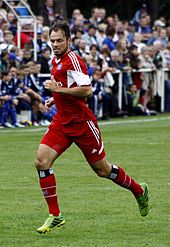 During the 2010 summer break, Westermann moved to Hamburger SV. He signed a contract that ran until 2015 and replaced Jérôme Boateng . At HSV he wore the jersey with the number 4 on his back. On August 13, 2010 he was named by coach Armin Veh as the team captain of HSV and succeeded David Jarolím . On the 11th matchday of the 2010/11 season he scored his first competitive goal for Hamburg in a 2-1 home win against TSG 1899 Hoffenheim with the equalizer. On April 9, 2013 Rafael van der Vaart replaced him as team captain. After the 2014/15 season , in which HSV only secured relegation as in the previous year, his contract period was not extended.

Westermann polarized towards the end of his time at HSV through individual mistakes, but also through high commitment, loyalty and identification with the club. This earned him the nickname “HW4” among the fans - based on Cristiano Ronaldo's numeronym “CR7” - as a result of an important and worth seeing winner in the 2014 relegation battle against Bayer 04 Leverkusen . As a center-back, full-back or six-man, he completed 159 Bundesliga games for HSV, in which he scored nine goals. There were also eleven cup games (two goals) and three relegation missions (no goal). He was almost always a regular player and was substituted on in only 13 of his 173 competitive appearances.

For the 2015/16 season he moved to the Spanish newly promoted Betis Sevilla in the Primera División . Westermann made his league debut for Betis in a 1-0 home win against Real Sociedad San Sebastián on September 12, 2015. On October 4, 2015, he scored his first goal for Betis in the game at Rayo Vallecano (2-0).

After one season, Westermann moved to the Dutch record champions Ajax Amsterdam in July 2016 after he had no longer played a role in the plans of the new Betis Sevilla coach, Gustavo Poyet . He signed a two-year contract.

After only playing four league games at Ajax, Westermann moved to the Austrian Bundesliga club FK Austria Wien in July 2017 , with whom he received a contract that ran until June 2019. In April 2018 he ended his career as a professional footballer because of a knee injury; his contract was terminated. 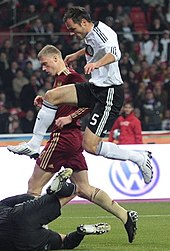 Westermann in the jersey of the national team (2009)

Heiko Westermann made his debut for the German national team on February 6, 2008 in a 3-0 win in the international test match against the Austrian team in Vienna . He was part of the squad for the EM 2008 and was runner-up European champion, but was not used. He scored the first goal of his international career on September 6, 2008 in a 6-0 win in the World Cup qualification in Vaduz against the selection of Liechtenstein .

On May 6, 2010 he was appointed to the expanded squad for the 2010 World Cup by national coach Joachim Löw , but took due to a scaphoid fracture that he had a few weeks before the start of the World Cup in a friendly against Hungary (3-0) shortly before the end of the Match had not made it to the finals in South Africa.

After Westermann played in a 0-0 draw against Sweden on November 17, 2010 and was then called up for the friendly against Italy in Dortmund in February 2011 , he was not nominated for the national team for a year and a half. So he did not take part in the EM 2012 . On October 8, 2012, he was called up again to the DFB-Elf as a replacement for the injured Mats Hummels for the World Cup qualifiers against Ireland and Sweden . However, it was not used in any of the games. He made his first game for the DFB team since November 2010 on May 30, 2013 on a trip to America, when he started in the 4-2 win over Ecuador . In the following game against the United States he scored his fourth international goal in a 3: 4 defeat to 1: 2. In the following three games until September 2013 he was not considered before he was subsequently nominated on October 7 for the last qualifying matches against Ireland and Sweden. He was not used in either game. On November 8, 2013 he was appointed for the last time by Löw for the friendlies against Italy and England . He was not used in the game against Italy in the Giuseppe Meazza Stadium in Milan , in the second friendly match on November 19, 2013 he was in the starting line - up against England at Wembley Stadium in London and was replaced by Julian Draxler after 66 minutes . However , he was not considered for the 2014 World Cup .

Since February 2019 Westermann has been Jens Langeneke's assistant trainer at Fortuna Düsseldorf's B-youth team (U17) . Since summer 2019 he has also been assistant coach of the German U-15 national team under Marc-Patrick Meister .

Westermann has had a daughter since May 2008; because of her birth, he missed the EM preparatory game against Belarus . The second daughter was born in October 2010.