The Königsberg fraternity Gothia is a fraternity founded in Königsberg in 1854. It has been based in Göttingen since 1949. It brings together students and alumni of the former Albertus University and the Georg August University. The Königsberg Goths ("Köpi-Gothen") have always been associated with the scale and color.

Color and coat of arms

Gothia's color is "black-gold-blue" (read from below) with golden percussion . A blue velvet hat with gold Albertus is worn. The Konfederatka was also in use until the 1870s . Like other old fraternities, Gothia has no fux band. The Füxe contribute as much as the boys, the tri-color ribbon.

In addition to colors and compasses , the coat of arms shows crossed bells , fraternization hands framed by ouroboros , and an oak tree on the steep coast of Samland . A rising sun and lightning can be seen in the background. Furthermore, the coat of arms shows the Königsberg university seal with Albrecht (Prussia) , the founder of the Albertus University Königsberg . The Albertus has been the badge of the Königsberg fraternity since 1817. The inscription CIVIS ACAD. ALB. stands for "Academic Citizen of the Albertina". 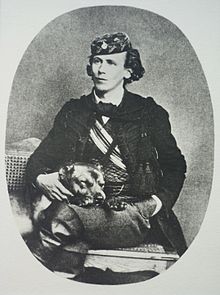 The name Gothia is first found as a name for one of the numerous wreaths of the Albertina General Burschenschaft, which existed at Albertus University in the 1820s and 1830s . This wreath Gothia, initially called Gothonia, had the colors "red-gold" and after merging with the wreath Arminia in the winter semester 1840/41 under the name Gothia the colors "blue-gold". A gold-lined blue ribbon and a blue-gold cap were worn. The Albertina fraternity dissolved in 1845 after the individual fraternity Germania had been formed from the last members of Gothia in 1843 . Since on the one hand the Landsmannschaften ( corps ) are not numerically strong, and are disintegrating within themselves and with the other connections and students, on the other hand the fraternity Germania had reached an unusual bloom, it was important not to let the superiority wrest from the fraternity hands. So a second fraternity was founded from the middle of Germania - the Gothia. On November 19, 1854, 8 members, including senior Adolf Ansat, resigned from Germania and held the constituent assembly on the same evening. On November 22nd, 1854, they founded the Gothia fraternity with three “mules” from the free student body . The donors chose “black-gold-blue” as the colors (read from below). The colors "blue-gold" come from the former Gothia wreath. The “black” was added in order to carry another color of the black, red and gold tricolor in addition to the “gold” . Since in Prussia in 1854 the use of the fraternities' motto Honor, Freedom, Fatherland was still viewed as a provocation, Gothia used her motto FREI IS DER BURSCH as a motto and hid the motto of all fraternities honor, freedom, fatherland as abbreviations in the circle , like Name, colors and coat of arms has remained unchanged since it was founded. From January 1855, the Goths fought with members of the Masovia Corps . Both Bünders had their fencing floor with Mrs. Billig, in the so-called “Billigianum” (quay No. 4).

Initially, Gothia was turned towards progress , even though the scale had been of great importance since the foundation. This was expressed above all in the fact that, with the involvement of the fraternity Germania Königsberg and the Corps Baltia Königsberg, an attempt was made to revive the Albertina fraternity. After this project had failed, Gothia turned briefly to the Arminism (fraternity) . On June 27, 1860 Gothia founded a new fraternity Arminia, with which the SC tied up a crap relationship in the following semester. In 1862 Gothia clearly committed to Germanism (fraternity) . In the summer semester of 1865 (when the new Königsberg Seniors' Convent was accepted into the Kösener SC-Verband) Germania and Gothia formed the first Königsberg deputy convent .

Gothia temporarily stood by the principle of life , so did not tolerate second memberships in other student associations. Even before Gothia joined the South German Cartel , the principle of life was given up. As far as the cartel relations of Gothia are concerned, when it was founded, it entered into a close friendship with Germania, which found expression in a close cartel, a ban on drumming with one another and joint meetings . This narrow cartel lasted until 1857 when a Paukkartell with the Germanic peoples came into being. In the same year Gothia closed a cartel with the Landsmannschaft Teutonia Bonn and the Landsmannschaft Torgovia (later Teutonia) in Halle. In 1858 the Leipziger Landsmannschaft Dresdensia joined. This cartel was united, among other things, on the basis of the positive attitude towards unconditional satisfaction , but it was short-lived: In the summer semester of 1862, the Dresdensia left the cartel association, after having previously become a fraternity, while the cartel with the Bonn and Halle Teutons until 1865 duration. With the Bonn Teutonia and the Halle Teutonia Gothia each had three common federal brothers. Gothia was not a member of the first fraternity association, the Eisenach Deputy Convent . In 1885 she joined the General Deputy Convent, which in 1902 became the German Burschenschaft . In the summer semester of 1900, Gothia put two federal brothers on leave to support the Königsberg fraternity of Teutonia. When fraternity members of the Red Association and the South German Cartel visited Gothia exclusively during their stays in Königsberg, a good relationship arose with both cartel associations. Finally, on March 1, 1924 in Jena , Gothia solemnly joined the South German Cartel founded in 1861 , of which she is still a member.

“The hectic conditions among the young academics and in the associations, caused by the break-in of the NSDAP, demands of the SA, the HJ and the student leadership, unfortunately very soon broke the initial unity among the various large associations in the Reich. Fanatics emerged in associations and individual corporations, albeit certainly out of subjective conviction. For Königsberg it was characteristic that z. For example, the two oldest, respected and tradition-conscious fraternities, the white Germania (founded in 1843) and Gothia (founded in 1854), a member of the South German cartel, probably left the German fraternity and joined the old fraternity ring. "

When the German Burschenschaft came under National Socialist pressure, Gothia resigned from the German Burschenschaft in 1934. She joined the old fraternity , which also expired in 1936. The same fate befell Gothia as an individual fraternity , which had to join forces to form the comradeship “Hermann von Salza”. Gothia was finally suspended on May 19, 1936. On February 3, 1942, Gothia was the only Königsberg corporation to reconstitute during the Second World War by accepting the members of the Daidalia . It was even possible to play three racket games with the Corps Saxo-Borussia Berlin in Berlin during the war . In 1944, teaching at the Albertus University ceased and active operations finally came to a standstill due to the effects of the war.

Gothia was reconstituted on July 20, 1949 by the reactivated Goths Dittmann, Erdmann, Gilde and Koslowski in an infection barracks on the former airfield of Göttingen . After the flight and expulsion of Germans from Central and Eastern Europe in 1945–1950 , many academics from Königsberg came to the city. And the Georg-August University of Göttingen had taken on the sponsorship of the lost Albertus University. At the joint meeting on August 20, 1949 in Hamburg, the Philistine officially confirmed the reconstitution with the adoption of the federal constitution and the solemn admission of the first two foxes (Hinz, Kuprat). Gothia initially traded as the Association of East Prussian Students Albertina , but was soon able to perform under the old name. The Federation received special support from the Frisia fraternity . She made her premises available for pubs , kettledrums and archive materials as long as Gothia did not have a house of her own. On November 30, 1957, the newly built corporation house in Göttingen's east quarter was put into operation. In 1950 Gothia joined the re-established German fraternity. She left them in 1984.

Students from the HAWK University for Applied Science and Art Hildesheim / Holzminden / Göttingen and the PFH Private University Göttingen can also be accepted into Gothia.

Foundation of a Goth - the Palaestra Albertina

Before Gothia had its own house, people went to bars in various Königsberg restaurants. From 1896 Gothia had its own premises in the Palaestra Albertina , which Friedrich Lange had donated to the Albertus University. On June 29, 1913, they moved into the house built especially for the Gothia fraternity in Cäcilienallee on Oberteich . After the reconstitution in Göttingen, an infection barrack was first prepared at the old airfield in Göttingen, until the house, which was newly built in 1957, could finally be inaugurated.