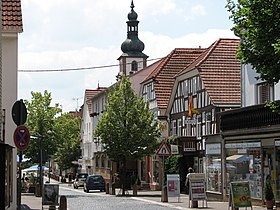 Salmünster is a district of Bad Soden-Salmünster in the Main-Kinzig district in East Hesse and the seat of the city administration.

The salt flows into the Kinzig near Salmünster ; Walking and cycling paths through the river meadows connect the district with Bad Soden.

The place Salmünster is mentioned for the first time as Salchenmunster in a document collection of the Fulda monastery , the so-called Codex Eberhardi , which was created in the years 1150–1168.

A document that is preserved as a copy in this collection describes the borderline of the Salmünster parish from the second half of the 9th century. According to Eberhard, the year 860 is given as the foundation date of the parish, the year 886 from a copy of the 12th century is probably more correct. The etymology of the place name is controversial, but in any case it points to a church foundation (ending -munster from Latin monasterium = monastery cell). In 909 the Archdiocese of Mainz transferred the district to the Fulda Monastery.

In 1319 the Salmünster Abbey was established, in which several secular priests met. These jointly exercised the priestly duties in the parishes that were assigned to the church in Salmünster.

In 1320 the settlement that had formed around the collegiate church, at the request of the Fulda abbot Heinrich VI. von Hohenberg was raised to the status of a city by Emperor Ludwig the Bavarian and granted the privileges of the four imperial cities of Frankfurt am Main , Friedberg , Gelnhausen and Wetzlar . This apparently took into account the importance of the place, which was a way station on the important Reichsstrasse from Frankfurt to Leipzig; Today's main street (Frankfurter Straße), which cuts through the old town in a north-south direction, follows this historic route.

The city wall that was built shortly afterwards (completed around 1400) gave the place its remarkably regular rectangular shape, which can still be seen today in the streetscape. The restored city fortifications can be viewed in particular at the Schwedenring / Amthof (so-called Zent- or Hexenturm) and at the Dammweg (moat and city wall). At three of four corners of the rectangle - with the exception of the south-west corner with the collegiate church - courtyards were formed, which were built by the noble families of the area, including the lords of Jossa and the lords of Hutten . They exercised bailiwick rights in Salmünster on behalf of the Fulda monastery ; a "Vogtstraße" reminds of this. The Huttenhof and Amthof (north-west corner) as well as the Schleifrashof (south-east corner) are among the noble residences still preserved today ; At Freihof (also called "Alter Hof") in the northeast, the area is still documented, but the structure has been completely changed.

Although the 16th and 17th centuries were marked by unrest - u. a. Due to the rapid succession of Reformation and Counter-Reformation and the numerous plague epidemics in Salmünster - the city largely escaped the destruction caused by the military conflicts of the time. The story of the “Brave Women of Salmünster” has been handed down from the time of the Thirty Years' War , who, according to the contemporary chronicler Johannes Lutz (landlord of the Weißes Roß inn ), fended off the attack by 1,200 Swedish marauders in 1646 by throwing beehives at them. In 2001, a bronze memorial was erected to the intrepid defenders in the area of ​​the demolished lower gate.

As a result of the Thirty Years' War, the Franciscans (OFM) of the Thuringian Franciscan Province ( Thuringia ) came to Salmünster in 1650 . Shortly before, they had been expelled from the neighboring town of Gelnhausen. In Salmünster they built their new monastery from 1691 to 1694 .

Around fifty years later, in 1745, the old collegiate church was torn down and replaced by a contemporary, baroque church ( St. Peter and Paul ). The old bell tower, however, was preserved as it formed part of the city fortifications. It was not until 1895 that the tower, which had since fallen into disrepair, was laid down after it had partially collapsed, and the material used to enlarge the monastery building.

In the 19th century, Salmünster was gripped by the political turmoil that followed the Napoleonic Wars . The Fulda Abbey was secularized in 1802 and fell to Wilhelm V of Orange or his son Wilhelm Friedrich . However, the Orange lost their possessions when they joined the coalition against France, but were defeated by Napoléon in 1806 in the course of the battle of Jena and Auerstedt . As a result, the Fulda areas officially became a French province, which in turn was incorporated into the newly established Grand Duchy of Frankfurt in 1810 . Salmünster, a place of jurisdiction since ancient times, was given the function of a district fairy . As early as 1813, however, after Napoléon's defeat in the Battle of Leipzig , there was renewed redistribution of power. While retreating, Napoleon is said to have stopped by Salmünster on October 29, 1813 and, according to tradition, rested on a bench that is now in the entrance area of ​​the Hotel "Engel" (built in 1687).

Salmünster received a train station in 1868 and a Protestant church in 1888.

In the course of administrative reform in Hesse , the communities were on a voluntary basis on December 1, 1970 Alsberg , Kerbersdorf and Romsthal in the city Salmuenster incorporated ; on July 1, 1972 also the community of Katholisch-Willenroth , which until then belonged to the district of Gelnhausen . The city of Salmünster was merged with the city of Bad Soden bei Salmünster and the municipality of Mernes on July 1, 1974 to form the city ​​of Bad Soden-Salmünster by state law. For Salmünster, a local district with a local advisory council and a local mayor was set up.

A renovation of the old town in 1987 was followed by the restoration of the city wall in 9 years of voluntary work (2000 to 2009) by a group of Salmünster citizens. At the Mühlenbachbrücke a memorial stone with the inscription Mensterer Stääklopper ho die Mauer goanz liked this restoration.

The Franciscans gave up the monastery in 2004. In the former monastery building there is now a modern training and retreat house for the diocese of Fulda.

In the town council are the CDU , the SPD and the GWL represented.

On October 16, 1967, the municipality of Salmünster in what was then the district of Schlüchtern , administrative district of Wiesbaden , was awarded a coat of arms with the following blazon : In red, a silver shield with a continuous black cross under a gold miter set with red stones.

The old town of Salmünster within the restored city fortifications is characterized by alleys starting from Frankfurter Straße within the rectangular floor plan; the Mühlbach flows through the center of the area in a west-east direction. Half-timbered houses from the 17th and 18th centuries are mixed , some with decorative friezes and inscriptions, with houses in colored clapboard construction as facade design. Well-restored half-timbered houses are, for example, Frankfurter Strasse 13 and 29, houses in Vogtgasse, the former town mill, an estate in Hirtengasse and the town hall (1844–46), partly in half-timbered, partly in shingle, with a fountain that was renovated in 1990.

Church of St. Peter and Paul

Franciscan monastery with the parish church of St. Peter and Paul in Salmünster.

The baroque church of St. Peter and Paul of the former Franciscan monastery was built from 1737 to 1745 by the Fulda court architect Andrea Gallasini . The interior furnishings (5 altars and a pulpit) from the same era were made by the Fulda court painters Johann Andreas Herrlein and Emanuel Wohlhaupter and the Franciscan sculptors Hyazinth Wiegand and Melchior Egenolf . In addition to the sacred iconography (life and suffering of Christ and Mary), the theme is also the homage to the Fulda prince-bishop and founder Amand von Buseck (donor's coat of arms).

The Salmünster Passion Play has been performed in the Church of St. Peter and Paul since 1983 .

The former Hofreite in the Hirtengasse (half-timbered building from the 18th century) has been the local museum of the city of Salmünster since 1997 with a permanent exhibition on village life around 1850. Equipment from barn and stable, craft workshops (saddlers, wagons, shoemakers, blacksmiths, coopers, Carpenter), but also church exhibits from the former Franciscan monastery.

The Protestant Reconciliation Church was built in the neo-Gothic style in 1888.

The economy essentially consists of suppliers to the automotive industry and retailers .

The old town of Salmünster has a few retail shops, simple accommodation, restaurants and cafes.

Salmünster is on the junction Bad Orb the Federal Highway 66 to get to. There are also in Salmünster a train station with connections to Frankfurt and Fulda in every hour .