This article describes the district of the municipality of Cölbe in Hessen; other meanings are Schoenstatt and Krásno nad Bečvou (German Schoenstadt ). 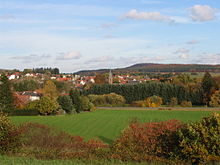 Schönstadt is a district of Cölbe in the central Hessian district of Marburg-Biedenkopf . Schönstadt has around 1500 inhabitants and is the third largest district after the core community of Cölbe and Bürgeln.

Schönstadt is touched by the federal highway 3 to the south-east and the Red Water flows through it in a north-south direction .

Geologically and geographically, the district of Schönstadt is assigned to the Burgwald , which is delimited as a red sandstone plateau with differences in level of up to 200 m from the Eder , Wohra , Lahn , Ohm and Wetschaft . Schönstadt is one of the oldest villages in the castle forest. Archaeological finds confirm the assumption that as early as 500–300 BC Chr. Chatters and Celts were resident.

All Hessian "-stadt-places" fall into the founding epoch of the 5th - 8th Century; Send and baptismal churches with St. Martin's patronage date back to this time. The Schönstadt court grew out of a tithe in the 13th century . These Franconian-early medieval administrative units were based on the broadcast courts (original large parishes). The village was first mentioned in a document in 1225.

The lands belonging to Schönstadt Castle were bought by Conrad Milchling zu Michelbach in 1331. As early as 1350, however, jurisdiction was passed to the Lords of Fleckenbühl, and the Milchling later also received a share of it through ownership transfers. Philipp von Scholley the Elder , Head of the Aristocratic Foundations in Hesse, acquired a quarter of the Schönstadt court as a pledge through his marriage to Anna Hilga von Hatzfeld around 1612, with which his descendants, together with the Lords of Fleckenbühl, came into the contingent loan of Schönstadt. The Milchling mansions in the extensive valley basin were originally built as water castles . In 1749 the Schönstadt Palace was built on the foundation walls of an old moated castle.

The former clustered village grew considerably in the 17th century due to the connection to the Heer and Poststrasse Kassel-Frankfurt, but experienced an economic slump with the commissioning of the Main-Weser Railway . In 1897 the old Martinskirche was replaced by a new one.

The following list gives an overview of the territories in which Schönstadt was located and the administrative units to which it was subordinate:

With an edict of June 29, 1821, administration and justice were separated in Kurhessen. Now judicial offices were responsible for the first instance jurisdiction, the administration was taken over by the districts. In Marburg, the Marburg district was set up for the administration and the Marburg district court was the court of first instance responsible for Schönstadt. In 1850 the regional court was renamed the Marburg Justice Office. The Supreme Court was the Higher Appeal Court in Kassel . The higher court of Marburg was subordinate to the province of Upper Hesse. It was the second instance for the judicial offices.

After the annexation of Kurhessen by Prussia, the Marburg district court became the royal Prussian district court of Marburg in 1867 . In June 1867, a royal ordinance was issued that reorganized the court system in the areas that belonged to the former Electorate of Hesse. The previous judicial authorities were to be repealed and replaced by local courts in the first, district courts in the second and an appeal court in the third instance. In the course of this, on September 1, 1867, the previous judicial office was renamed the Marburg District Court. The courts of the higher authorities were the Marburg District Court and the Kassel Court of Appeal .

With the entry into force of the Courts Constitution Act of 1879, the district court continued to exist under his name. In the Federal Republic of Germany, the superordinate instances are the Marburg Regional Court , the Frankfurt am Main Higher Regional Court and the Federal Court of Justice as the last instance.

Description : A silver (white) slanting bar in red with three black hearts after the figure. The coat of arms of the former municipality is a modification of the shield of the Milchling family, which carried the black hearts in the silver shield.

In 1972 the motor and glider airfield was relocated from Marburg to Schönstadt. Today Schönstadt is characterized by the proximity of the district town of Marburg and the settlement of several small industrial companies. The village character is only noticeable in a few places in the old town center. Even the tasteful traditional costume from Schönstadt is only worn by a few women on special occasions. Since 1985, the former is farm Fleckenbühl according to biodynamic principles of addiction care Fleckenbühl operated.

Since autumn 2008 there has been a marked circular route around the Junkernwald near Schönstadt. The start is the old water tank on the outskirts. The hiking trail is 9.5 km long and has some information boards.

In July 2009 Schönstadt achieved 1st place at state level in the competition “ Our village has a future ”.