Logo of the Würth Foundation 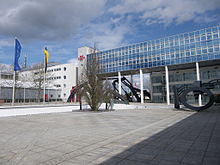 Würth company in Künzelsau, art in architecture, sculpture by Jacobsen

The non-profit foundation Würth , based in Künzelsau , was founded in 1987 by Carmen and Reinhold Würth to support the cultural work of the company Adolf Würth GmbH & Co. KG . It is not to be confused with the Carmen Würth, Bettina Würth, Marion Würth and Markus Würth family foundations, which are limited partners in the Würth Group.

The Würth Foundation has a capital of 4.1 million euros; In the last few years (as of July 2005) an average of 150,000 euros has been distributed from this. All costs for the ongoing business of the foundation are borne by the company.

The purpose is to promote science and research as well as art and culture through the following measures:

The Robert Jacobsen Prize, which was created in memory of the Danish artist Robert Jacobsen , has been promoting visual artists since 1993 . It is endowed with 25,000 euros and is awarded every two years.

The Würth Prize for European Literature, which has been awarded every two years since 1998, aims to recognize literary efforts to promote Europe's cultural diversity. It is endowed with 25,000 euros.

The Tübingen Poetics Lecturer has enabled the Eberhard Karls University of Tübingen to invite prominent writers to courses and workshop discussions since 1996. The lecturers changed from semester to semester, since 2006 the lectureship has only taken place once a year in the winter semester. The Tübingen poetics lectureship is organized by the German Department of the university under the direction of Dorothee Kimmich .

In cooperation with the respective holder of the poetics lectureship, the Würth Literature Prize, endowed with 7,500 euros, is awarded as a sponsorship and young talent prize; the prize money can be split. The award is given to a literary text, the subject of which has been given by the poetics lecturer.

The winners of the Würth Literature Prize are listed here .

With the Würth Prize of Jeunesses Musicales Germany, which the foundation awards in cooperation with Jeunesses Musicales Germany (JMD), the musical youth of Germany is to be given special support. The prize money of 10,000 euros is provided by the foundation, the winners are selected by the JMD board. The award has been presented annually since 1991.

Since 2007, the Würth Education Prize has been awarded to initiatives and economic concepts in schools.