Crime scene: death of a teacher

The death of a teacher is the 809th episode of the German television crime series Tatort from 2011. The film of the Südwestrundfunk by director Thomas Freundner with Ulrike Folkerts and Andreas Hoppe as investigators Odenthal and Kopper in their 54th and 45th case from Ludwigshafen was shown on 11 First broadcast on September 1st, 2011 .

The single 44-year-old teacher Heike Fuchs is found face forward in a room fountain in her apartment after the long vacation. Your death must have occurred six weeks ago at the beginning of the summer vacation. The woman was tied with tape, but no traces of possible resistance are found, so that the inspectors Lena Odenthal and Mario Kopper suspect that Ms. Fuchs was previously drugged. The investigations initially lead Odenthal and Kopper to Ludwigshafen's Albert Einstein secondary school , where the teacher taught art and mathematics. There they meet Eshe who they had already seen at the crime scene. Eshe is a 16-year-old school student who immigrated to Germany from Somalia three years earlier with her mother Dafina and her sister Meesa . She had a very good relationship with her teacher Mrs. Fuchs and confided in her. In order to remain in Germany, Eshes mother Dafina was a marriage of one. She works as a doctor's assistant in Dr. Werner Grossmann. Grossmann was traveling to Somalia for Doctors International and got to know Dafina there. In his practice in Ludwigshafen, he gives consultation hours once a week for patients who otherwise cannot afford treatment. Dafina describes him as "the only white doctor who respects the traditions of blacks". Dr. Grossmann's wife Regula heads the German-African meeting center and is involved there against the circumcision of women, among other things . Ms. Fuchs was also involved in this meeting center.

Dafina's bogus husband, Enno Steger, runs an internet café and also takes care of transferring money from African emigrants to their families in Africa ( hawala system ). Steger was a year ago as a supervisor with on an Italy - class trip to the high school, where he had an affair with Heike Fuchs. During a night of love between the two, a drunken student drowned in the sea. The parents of the pupil Nico Betz swore revenge on the teacher at the grave, because she was to blame for the death of their son because she had neglected her duty of supervision. A court acquitted Mrs. Fuchs, however. Nico's classmate Paul Mertens reports that Nico was in love with Eshe and because she did not reciprocate his love, he got drunk. Norbert Betz, Nico's father, works for the Ludwigshafen-based pharmaceutical company Lupharm , which, among other things, produces a strong anesthetic for animals. Paul didn’t like to talk to Frau Fuchs either, because he got a six in mathematics from her and therefore stayed seated. Paul is also in love with Eshe.

Ms. Fuchs also looked after the young trainee teacher Marie Weber at school, but there was almost no private contact between the two. Kopper notices that Marie wears a gold chain around her neck that looks exactly like the chain he gave to a woman in his youth after a night of love on the beach in Italy. He does the math and theoretically Marie could be his daughter. At a meeting with her mother Gabriele after more than 28 years, Kopper found out that her husband Burkhardt also worked as a chemist at Lupharm . He would like to get to know him to get information about Lupharm and the employees there. He later receives information that surveillance cameras have recorded Mr. Betz stealing some ampoules of the anesthetic.

During the interrogation, Norbert Betz confesses that he wanted to drown Ms. Fuchs. Just like his son, she was to die. He had drugged her, handcuffed her, and pressed her face into the pool of the room. But when the doorbell rang, he stopped and fled. He heard Frau Fuchs cough inside.

Meesa, Eshe's little sister, is about to be circumcised. Her mother Dafina is a circumciser. Eshe has already lost a baby sister who died of an infection following a circumcision. Dr. Grossmann covered the circumcisions as a doctor in Somalia and later carried out them himself in Germany to alleviate the pain of the young girls. Afraid that Dafina would betray him, he continued. Because Ms. Grossmann had received the Order of Merit of the State for her commitment , but had known about her husband's activities for some time, she didn't want to risk Ms. Fuchs exposing him. She admits that that evening she entered Frau Fuchs' apartment through the open patio door and that after an argument with her, she fell into the pool, lay there and drowned. Ms. Grossmann hoped that the suspicion would not fall on her based on the evidence surrounding the handcuffed Ms. Fuchs. 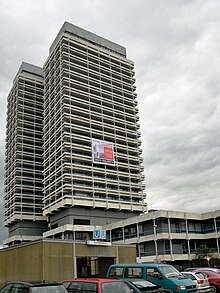 African mothers and their young daughters gather in an empty skyscraper on Hemshofstrasse to pursue the traditional ritual of circumcision. Eshe tries to prevent this at the last minute, but her mother locks her out. The student then calls Lena Odenthal. The police arrive at the skyscraper, prevent the ritual from being carried out and arrest Dafina.

A genetic test confirms that Mario Kopper is not Marie's father.

Filming locations were among others Ludwigshafen am Rhein , Karlsruhe and Baden-Baden . The Albert Einstein secondary school , the German-African meeting center and the Lupharm company are fictional. Karl-Heinz Gierke, the perpetrator from the first Schimanski - Tatort - Duisburg-Ruhrort can be seen here as a caretaker who is questioned as a witness by the inspectors in the victim's house.

The criticisms of the death of a teacher varied.

“With this construction kit, however, it connects seamlessly to the terrible last“ crime scene ”from Ludwigshafen. Under the title “Im Abseits”, the topic of women's football had actually been freed from its clichés, but only sparrow knowledge and lace panties came up. "Death of a teacher" now works just as easily, and one inevitably wonders whether the supervising SWR editorially specifies this questionable direction: First, one educates oneself and illuminates benevolently societal marginal areas - and then confirms all resentments. So the camera feasts on traditional clothes and exotic food tables, but in the end delivers nothing less than a general demonization of the culture, which is so brightly illuminated. Cheerful world-hugging mood and bad resentment, how uncomfortable, go hand in hand here. "

"The" Tatort - Death of a Teacher "is one of those thrillers that unleash an overconstructed" action insanity "in which everyone is guilty or gets into debt so that the murder rate can be satisfied. The hinges of the Whodunit dramaturgy squeak loudly. No topic bonus helps, especially if the topic, genital mutilation, is pulled out of the hat 15 minutes before the end. Weak book, excessive game, ambiguous looks, too many basic sentences! "

“What could have degenerated into mere black and white painting, the director Thomas Freundner, who also wrote the screenplay together with Hans Gerd Müller-Welters, uses his experience. He succeeds in reducing the entanglement of his protagonists to encounters, to images and to pleasantly little grandiose, even moralizing speeches - without, literally, trivializing what is happening. And the teacher's death is spread over more than one shoulder. "

“After so many TV appearances by Lena Odenthal, viewers no longer expect big throws, they have known each other for far too long. Yesterday's episode was good crime fiction with more elements of surprise than the rather succinct title promised. "

In Austria 643,000 viewers and a 23 percent market share were achieved.