Unterentfelden ( Swiss German : ˈʊndərˌæmpfæʊd ) is a municipality in the Swiss canton of Aargau . It belongs to the Aarau district , is located in the lower Suhrental and borders the canton of Solothurn .

The village is located northwest of the mouth of the Uerke in the Suhre , on the edge of an extensive plain. Both bodies of water were completely straightened, but have been renatured again. The plain is bounded by gently rising, wooded hills: in the west by the Ischlag ( 470  m above sea level ), in the north by the Distelberg ( 495  m above sea level ) and in the northeast by the Gönert ( 468  m above sea level) . ). The built-up area has grown together seamlessly with that of the neighboring municipality of Oberentfelden .

The area of ​​the municipality is 288 hectares , of which 86 hectares are forested and 127 hectares are built over. The highest point is at 495 meters on the Distelberg, the lowest at 406 meters on the Suhre. Neighboring communities are Aarau in the north, Suhr in the east, Oberentfelden in the south and the Solothurn communities Schönenwerd and Eppenberg-Wöschnau in the west.

In 965 the German Emperor Otto the Great donated the Endiveld farm to the Disentis Monastery . The place name, which comes from Old High German , means "end of the field". The lower part of the courtyard belonged to Beromünster Abbey from 1045 onwards , which after several changes of ownership finally fell to the Counts of Habsburg-Laufenburg . At least since 1306, the main line of exercised Habsburg , the court rights from. In 1415 the Swiss conquered Aargau; Unterentfelden was now in the subject area of ​​the city of Bern , the so-called Berner Aargau . In 1528 the Bernese introduced the Reformation .

Relations with the neighboring city of Aarau were very close, but also associated with problems. As early as 1312, the lower jurisdiction was passed to the Aarau citizen Ulrich Trutmann, in 1411 to the city itself. Frequent disputes over land use caused the Aarau residents to cede the lower jurisdiction to Bern in 1576 in exchange for a share of the customs revenue in Biberstein . Over time, the town and numerous townspeople acquired more and more properties on the Distelberg and on the Gönert, which only came back into the possession of the residents of Unterentfelden in 1793 after a border adjustment. The Steckhof Roggenhausen, belonging to the city since 1527, was not part of this agreement.

In March 1798 the French took Switzerland, ousted the «Gracious Lords» of Bern and proclaimed the Helvetic Republic . Unterentfelden was now an independent municipality in the new canton of Aargau. At that time the village was mainly inhabited by Tauners who were dependent on additional income in addition to agriculture . These were particularly evident when working from home for the Aarau textile industry .

The Suhrentalbahn started operating on November 19, 1901. The construction of a new schoolhouse in 1911 almost led to the bankruptcy of the community, which then sought a merger with Aarau. However, this did not materialize because the city feared tax increases. After 1950 Unterentfelden developed more and more into a residential community. Due to the extensive development of the southern slope of the Distelberg, the population almost tripled within twenty years. However, it has stagnated since 1970, as the building land reserves have been developed almost completely.

The village museum is housed in the Staufferhaus . The "Alt Unterentfelden" collection is on display, which includes various objects from the history of the municipality.

The blazon of the municipal coat of arms reads: "In yellow on a green three-mountain standing brown duck, in the head of the shield accompanied by three bars of six-pointed red stars." The coat of arms first appeared on a seal in 1828. It is based on a misinterpretation of the place name in the sense of «duck field», which linguistic research has since refuted. In addition, the color of the duck is not correct, as brown is not allowed in heraldry .

There have been several unsuccessful attempts to correct this situation. In 1948 the cantonal coat of arms commission suggested replacing the "false" duck with an etymologically justified emblem. When the next proposed amendment was made in 1964, the commission was more willing to compromise: the duck was granted to the municipal coat of arms, but it should now be white and float on a blue body of water in a green background. The community also rejected this proposal. In order to be able to publish a heraldically correct collection of coats of arms on the occasion of the 200th anniversary of the founding of the canton, the canton proposed in 2002 that only the color of the duck should be changed from brown to heraldically correct red. The community assembly could just make friends with a red duck, but not the population. A referendum was called immediately. Thus, the Unterentfelder were allowed to vote on May 18, 2003 on the coat of arms of their community. More than two thirds of those who voted voted against the red duck.

The assembly of those entitled to vote, the municipal assembly , exercises legislative power. The executing authority is the five-member municipal council . He is elected by the people in the majority procedure, his term of office is four years. The parish council leads and represents the parish. To this end, it implements the resolutions of the municipal assembly and the tasks assigned to it by the canton. The Aarau District Court is the first instance responsible for legal disputes . Unterentfelden belongs to the Friedensrichterkreis II (Oberentfelden).

According to the company structure statistics (STATENT) collected in 2015, Unterentfelden has around 1,800 jobs, of which 1% in agriculture, 37% in industry and 62% in the service sector. There are some medium-sized industrial companies, including a stamping plant, a furniture factory, a metal processing company, CARDAG (company of Trüb AG ) and Leica (manufacturer of geosystems). Most of the workers are commuters and work in Aarau and other communities in the agglomeration.

Unterentfelden is on Hauptstrasse 24 between Aarau and Sursee . It runs east of the village as a bypass road and also serves as a feeder to the Aarau-West connection to the A1 motorway , which is three kilometers further south. The connection to public transport is provided by the narrow-gauge Suhrentalbahn between Aarau station and Schöftland , which runs alongside the main road; The Distelberg, Post and Oberdorf stops are located in the municipality. On weekends there is a night bus from Aarau via Unterentfelden and Schöftland to Kölliken . 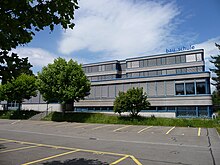 The community has two kindergartens and three schoolhouses in which primary school is taught. All upper levels ( Realschule , Secondary School and District School ) can be attended in neighboring Oberentfelden . Unterentfelden has been the site of the Swiss School for the Hard of Hearing Landenhof since 1876 , where hearing impaired children can complete all levels of compulsory schooling. The Swiss Construction School is also located in Unterentfelden. The closest grammar schools are the Alte Kantonsschule and the Neue Kantonsschule , both in Aarau .

Political communities in the Aarau district