The wild moor near Schwabstedt ( Danish Vildmose ) is a large-scale wetland with raised bogs and fens , alternating wet grassland and open water areas. With its raised bog areas, it is a specialty in the Eider-Treene-Sorge region , which is otherwise characterized by fens .

The wild moor near Schwabstedt in Schleswig-Holstein

The Wilde Moor is located north of the municipality of Schwabstedt , about 15 kilometers east of Husum in Schleswig-Holstein. It extends 3.5 km from north to south and 3.8 km from west to east. The wild moor originally comprised a moor area of ​​about 790 hectares; today 631 hectares are under nature protection. In the north, west and south the moor is enclosed by the Ostenfelder Geest, to the east it opens up to the flat pastures along the Treene.

In the vicinity of the Wild Moor there are loose rocks from the Quaternary : The Wild Moor itself is made up of various Holocene peats . The Ostenfelder Geest, which surrounds the Wilde Moor in the west, consists of moraine sand and glacial till from the Saale glacial period . Clays accompany the river valley of the Treene. 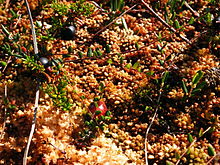 Crowberry and cranberry in the Wild Moor

Dwarf shrubs such as heather ( Erica tetralix ) and cranberries ( Oxycoccus palustris ) belong to the vegetation cover in the Wild Moor . There are sedge ( Cyperaceae ), such as the vaginal cottongrass ( Eriophorum vaginatum ), and sundew ( Drosera rotundifolia , in old peat cuttings), crowberry ( Empetrum nigrum ), broken leg ( Narthecium ossifragum ) and the gale shrub ( Myrica gale ) can also be found in the wild bog ) being found. Much of the moor surface is covered by peat moss ( Sphagnum spec. ) And pipe grass ( Molinia caerulea ).

The vegetation in the wild moor is divided into different zones: between the geest and the raised bog, bushes and tall perennials surround the moor. At the Treene, grasses cover the wasteland and the central, tree-free moorland is covered with rushes, cotton grass and peat moss.

The Association for Nature Conservation and Landscape Management of Central North Friesland regularly conducts bird watching in the wild moor. Up to over 80 bird species are counted, over 40 of them breeding species. Among the species that are on the Red List (S.-H. 1995) are the common snipe , goldenhammer and the meadow pipit . Kingfishers nesting in the ditch embankments have been observed. An occurrence of the black grouse , one of the few bog-dwelling species, could no longer be detected from 1979 onwards. Guests at the Moor are continuing to call the adder , grass snake , crested newt , smooth snake , mourning swans , otters , bats and even the raccoon dog .

Open moorland in the Wild Moor

In contrast to the fens in the river valleys of the Eider , Treene and Sorge , the wild bog could develop into a raised bog . In the Saale glacial period, glaciers compressed moraine material and created the difference in relief between today's Ostenfelder Geest and the Treeneniederung. Meltwater from the Vistula glacial period first cleared the Treenetal and then deposited meltwater sands. On top of them lay a network of intertwined rivers that ran through the barren valley with little vegetation. It is assumed that an arm of the river flowed directly from the north into the area of ​​today's Wild Moor, which is surrounded by the Geest in a semicircle. The water backed up and vortex movements cleared out some of the sediments. The water left the resulting hollow in the southeast. Another arm of the river flowed further east, following the current course of the Treene. A sandbank was formed between the two arms of the river, which was later sedimented into the bank wall. This bank wall forms an orographic barrier between the Treene and the Mulde in the west in front of the Geest. The later floods of the Treene, dammed up by the tides, could no longer flood the growing moor. A nutrient-poor site developed on which raised bog growth later began.

Mudden formed in calm waters in the early Atlantic . In the central area, reeds and sedges formed the first peat, surrounded by a break forest . The water silted up, and when peat reached the lake water level, trees began to take root everywhere, from the remains of which peat peat formed. In the subboreal area , the growth of raised bog-forming plants such as white moss began. The drainage of the wild moor at the end of the 19th century brought the moor growth to a standstill. 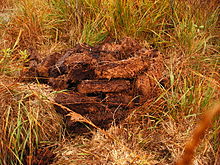 The wild moor was drained, cultivated and peated in the 19th century, additional drainage ditches were dug by the Reich Labor Service in the 1930s. The peat cut in the wild moor was only carried out to a small extent and served the farmers of the surrounding farms as fuel, or was delivered by ship to Friedrichstadt . The edge areas of the moor were used for agriculture, and so today there are grassland fallow on the eastern low moor areas of the wild moor. The upper area of ​​the bog soil was strongly influenced by the consequences of drainage: the withdrawal of water led to the subsoil of the topsoil, accompanied by compaction of the peat layers. In the ventilated area, the microbial degradation of the plant residues began.

With the renaturation of the wild moor since the beginning of the 1980s, the moor areas were no longer used as pasture. During this time, a steering group consisting of representatives from nature conservation associations and the Schleswig-Holstein Environment Agency set up a protection and development plan for the wild moor. The partly privately owned moor areas were bought up by the Schleswig-Holstein Nature Conservation Foundation, and in 1992 the wild moor was transferred to a nature reserve with the aim of preserving the moor area with its natural dynamics of water and the landscape. Since the early 1980s, measures to renaturalize the moor have been carried out with the aim of restoring the entire area of ​​the raised moor. The measures include increasing the water level, wetting of bog areas, backfilling ditches, cutting bushes, mowing, grazing and generally reducing the intensity of agricultural use. Paths have been repaired, a viewing platform has been built and an educational trail has been set up for the environmental education of visitors. The water level in the Wild Moor is regulated by dams and two pumping stations. The renaturation of the wild moor is integrated into a locally organized regional development (Eider-Treene-Sorge river landscape).

In the landscape framework plan, the wild moor is designated as an area particularly suitable for recreation. It forms a focus as a protected area, is a European bird sanctuary and falls under the FFH guidelines. Since January 2010 it has been part of the FFH area 1322-391 “Treene Winderatter See to Friedrichstadt and Bollingstedter Au”. In October 2015, the Nature Conservation Foundation Schleswig-Holstein commissioned the Ministry for Energy Transition, Agriculture, Environment and Rural Areas Schleswig-Holstein set up the first management plan for the FFH area and the European bird sanctuary. The development goal is the preservation of the Atlantic high moor biotope including the adjoining habitats in the fen and forest.

In the second half of the 20th century, a dike was built on both banks of the Treene. The 300 m distance between the dykes creates a first flood zone on the meadows between the dike and the river. In order to relieve congestion zones, a tributary was created northeast of the Wild Moor, the Polder Winnert. The wild moor serves as an overflow area for the adjacent Treene during floods.