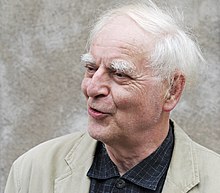 Friedrich Adolf Muschg (born May 13, 1934 in Zollikon , canton Zurich ; resident in Zollikon and Männedorf ) is a Swiss poet , writer and literary scholar .

Adolf Muschg was born in 1934 as the son of the primary school teacher Adolf Muschg senior (1872-1946) and his second wife. His half-brother Walter Muschg was in his mid-thirties at the time. His half-sister Elsa (1899–1976) was a successful children's book author.

From 1946 to 1953 Adolf Muschg attended a grammar school in Zurich. He spent two years at a boarding school in Schiers and passed the Matura at the literary high school Rämibühl in Zurich. He then studied German , English and philosophy in Zurich and Cambridge and did his doctorate on Ernst Barlach .

From 1959 to 1962 he taught German as the main teacher of German at the cantonal high school, then various positions as a university professor followed, including in Germany ( University of Göttingen ), Japan and the USA . After his first marriage to Charlotte Iklé, he married the writer Hanna Johansen in 1967 . In 1969 he was one of the secessionists with Max Frisch , Friedrich Dürrenmatt , Peter Bichsel and others who left the Swiss Writers' Association and launched the Olten group , which was formally founded on April 25, 1971 in Biel.

From 1970 to 1999 he was professor for German language and literature at the Swiss Federal Institute of Technology in Zurich . In 1975 Muschg was a candidate for the Zurich Social Democratic Party for the Council of States . He was not elected, but subsequently commented regularly on political issues of the time. From 1988 to 1993 he moderated the program Baden-Badener Disput in the television program Südwest 3 ; then Gertrud Höhler took over the moderation.

In 1991 he married the Japanese Atsuko Kanto, his third marriage. In 1997 he gave the speech at the opening of the German Association of German Studies in Bonn.

He has been a member of the Academy of Arts in Berlin since 1976 , and is also a member of the Academy of Sciences and Literature in Mainz, the German Academy for Language and Poetry in Darmstadt and the Free Academy of the Arts Hamburg . In 2003 he was elected President of the Academy of Arts in Berlin. From this office he resigned on December 15, 2005 surprisingly. The reason for this decision are "irreconcilable differences with the Senate of the Academy". He found that the move to the new building on Pariser Platz had not been used to publicize the activities of the academy. In February 2009, after 35 years, Muschg announced the end of the collaboration with Suhrkamp Verlag and the change to Verlag CHBeck .

Muschg lives in Männedorf near Zurich. He has been an honorary citizen of the community since 2014. His archive is located in the Swiss Literature Archive in Bern .

The neutrality of this article and fairness is disputed. A reason is given on the discussion page . You can get more information here .

On March 15, 2010 he published an article in the Berlin daily Der Tagesspiegel and in the Zürcher Tages-Anzeiger in which he defended Gerold Becker , the former director of the Odenwald School , against accusations of abuse of several of his students. He described the coverage of the abuse allegations as "campaign" and "hypocrisy". Rather, he established a connection between the "educational eros" formulated by the Greek philosopher Plato and the sexual acts on several of his students, which Becker did not dispute. On March 16, the editor-in-chief of the Tagesspiegel , Lorenz Maroldt , distanced himself from Muschg's contribution in the newspaper's leading article.

Muschg suffered from an extreme form of hypochondria at an early age , which went so far that he once underwent brain surgery to cure a non-existent tumor and once an appendectomy, for which he flew to Zurich from the United States.

With self-irony, he tells of his honeymoon in 1968 on a cargo ship, how he became the captain's horror when, a few days away from the nearest port (and hospital), he claimed he had an ulcerated appendix that had to be operated on immediately. The first officer asked for a description of the symptoms, passed them on by radio to a clinic in Gdansk and then came to Muschg with the reassuring message that it was not a ruptured appendix, but a stomach cancer, and he left plenty of time for an operation. But Muschg was very healthy.

The subject of hypochondria also appears in his work, for example in the story Your Mr. Brother . In the Frankfurt lectures , the genesis of the story is analyzed under the heading: "How I let Raimund die for me." In the play Rumpelstilz (premiered in 1968) the protagonist, high school professor Viktor Leu, has difficulty swallowing and imagines cancer of the larynx.