The village is located in Western Pomerania , about 110 kilometers northeast of Stettin and about 8 kilometers southeast of Kołobrzeg (Kolberg) . North of the village runs from northwest to southeast the Voivodschaftsstraße 163 , which corresponds in its course to the former German Reichsstraße 124 . Again north of it, the Szczecinek – Kołobrzeg railway runs parallel , but there is no train station here. 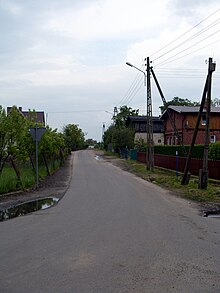 Dorfstrasse in Zernin (photo from 2010)

The village was laid out in the Duchy of Pomerania in the form of a street village in the Middle Ages . The oldest built-up part is east of the church along a road in the northern area of ​​the village.

The first written mention of the village comes from the year 1281. At that time, the Camminer Bishop Hermann von Gleichen determined the parish and the income of the newly founded church. The surrounding villages of Damgardt , Pustar , (Alt) Tramm and Coykow were parished into the church in Zernin .

A part of Zernin was sold to the Kolberg Cathedral Chapter by Bishop Konrad IV in 1319 .

The other part of Zernin was bought by the Kolberger Canon Ludwig de Wida around 1320 by swapping it for the village of Peterfitz from a Wulff Schmeling , which the Camminer bishop and the Kolberger council confirmed in 1330. In his will of 1331 Ludwig de Wida bequeathed this part of Zernin to the Kolberg cathedral chapter. With the same will, the Kolberg cathedral chapter also acquired the villages of Bartin and Damgardt; Bartin, Damgardt and Zernin then remained in the possession of the Kolberg Cathedral Chapter until its dissolution in 1811 and were referred to as the "Testament Villages".

In 1520 the Kolberg Cathedral Chapter settled a dispute between the three wills over rights of use in the Meitlow, an area east of Zernin. The relevant certificate is due to the numerous surviving there Flurnamen interesting.

The Thirty Years' War brought about changes in the parish of Zernin: The village of Coykow, which was located in the Kolberger Stadtwald , was destroyed and was not rebuilt. For this the village of Bogenthin was now parished to Zernin. Bogenthin had previously been the parish of St. Gertrude's Church in Kolberg, but the way there had become too difficult because in 1630 a bridge over the Persante had been destroyed.

During the Seven Years' War , Zernin was severely affected by the siege of the Kolberg Fortress: From August 1761 to January 1762 the villagers had to flee to Treptow . During this time the village was devastated. In 1762, 321 people died in the parish of Zernin within 8 months of starvation and epidemics.

In Ludwig Wilhelm Brüggemann's detailed description of the current state of the Royal Prussian Duchy of Western and Western Pomerania (1784), Zernin is listed among the villages of the Kolberg cathedral chapter. There was a preacher, a free school, 15 farmers, two half-farmers, nine cottagers and a preacher's widow's house, a total of 30 households (“fire places”). The "Krug, called Ströpsack , not far from the village" also belonged to the village .

With the abolition of the Kolberg cathedral chapter in 1811, Zernin was assigned to the office of Kolberg .

In the north, around 1850, the Zerninschen Katen, later referred to as Neu Zernin, and another group of farmsteads that bore the name Häge. After 1871, these were combined with some extensions that had arisen on the district of the village of Tramm to form an independent municipality, which was given the name Neu Tramm . The municipal area of ​​Zernin was reduced by 89 hectares; around 1928 another 43 hectares were reclassified from Zernin to Neu Tramm.

Another group of expansions that arose about 2 kilometers west of the village of Zernin was eventually called Neu Zernin .

Until 1945 Zernin formed a municipality in the Kolberg-Körlin district of the Pomeranian province . In addition to the village of Zernin itself, the community included the two residential areas Neu Zernin and Ströpsack .

Towards the end of the Second World War , Zernin was occupied by the Red Army on March 4, 1945 . The village population was expelled at the turn of 1945/1946 . Like all areas east of the Oder-Neisse border , the village came to Poland; the Polish place name was set as Czernin .