Dygowo ( German  Degow ) is a village in the West Pomeranian Voivodeship in Poland . It is the eponymous place and administrative seat of the Gmina Dygowo (rural community Degow) in the powiat Kołobrzeski (Kolberger Kreis) .

The Voivodship Road 163 runs through the place, which connects the Baltic Sea with the Pomeranian hinterland via Białogard (Belgard) and Szczecinek (Neustettin) and follows the former German Reichsstraße 124 in its course .

The place has a train station on the Szczecinek – Kołobrzeg railway line .

Village square with fountain in Degow 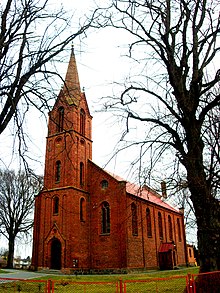 Prehistoric finds are a stone box grave with a cap urn from the Bronze Age and cremation graves from the Iron Age .

The village of Degow was founded in the 13th century as part of the German East Settlement in the Duchy of Pomerania . It was laid out as an anger village in such a way that the Ellerbach runs across the village green.

The first documentary mention of the village, at that time under the name "Daygowe", took place in 1276 in a document from Camminer Bishop Hermann von Gleichen .

The next mention comes from the year 1281. At that time, Bishop Hermann von Gleichen determined the income of the newly founded church in Zernin . He assigned a tax from the village of Mechenthin to the newly founded church in Zernin, but at the same time determined that the residents of Mechenthin should continue to belong to the church in Degow. This document shows that the church in Degow already existed at that time. At the same time, the document already used the current spelling "Degow".

In 1295 two members of the noble Borcke family donated the patronage of the church and a few Hufen Landes to the virgin monastery in Köslin . The Borckes are believed to be the original owners of the village. In 1334 the Camminer bishop Friedrich von Eickstedt came into the possession of Degow through an exchange, but already in 1336 he was forced to sell the village to the heirs of the Stegheliz family , as he urgently needed money to redeem a pledged castle.

Later Degow must have come back into episcopal ownership, since Bishop Konrad IV (ruled 1317-1324) sold the village to the Kolberg cathedral chapter . From then on, Degow remained in the possession of the Kolberg Cathedral Chapter until it was dissolved in 1811.

In Ludwig Wilhelm Brüggemann's detailed description of the current state of the Royal Prussian Duchy of Western and Western Pomerania (1784) Degow is listed among the villages of the Kolberg cathedral chapter. At that time Degow was on the "small country road" from Kolberg to Köslin. There was one preacher, ten full farmers , five half farmers , four kossas and a preacher's widow's house, a total of 21 households.

With the abolition of the Kolberg cathedral chapter in 1811 Degow was assigned to the office of Kolberg . The separation was carried out in 1835. The transport connections from Degow improved through the construction of a road (Chaussee) from Kolberg to Körlin , which was led on the southern outskirts, and through the construction of the Belgard – Kolberg railway with Degow station, about 1 kilometer north of the village. The proximity of the Persante river was also helpful for the timber trade. Under these favorable conditions, Degow gradually developed in the 19th century from a farming village to a settlement characterized by handicrafts and trades.

Around 1867, in addition to the village itself, the municipality of Degow included a demolition, which included 16 Büdner houses and 167 residents, the windmill, a mill owned by 22 residents, and the train station, which had 37 residents with outbuildings. At that time the community of Degow had a total of 786 inhabitants.

Until 1945 Degow formed a municipality in the Kolberg-Körlin district of the Pomerania province . In addition to the village of Degow, the municipal area included the Degow train station , Ochsenwiese , Peuske and Bartin settlement and, officially not counting as a residential area, Fuchsberg .

Towards the end of the Second World War , the region was occupied by the Red Army in the spring of 1945 . After the end of the war, Degow and the region were placed under Polish administration. The village, which has since been renamed Dygowo , is located in the powiat Kołobrzeski in the West Pomeranian Voivodeship (until 1998 Köslin Voivodeship ). The place is part and seat of the rural community of the same name and today has 1,549 inhabitants.

The medieval church building was demolished in 1877 because it was dilapidated and no longer sufficient for the growing parish.

The current church building was built in 1879 as a Protestant church in the neo-Gothic style. The two bells from the years 1572 and 1618 were taken from the old church.

Evangelical parish and pastor until 1945

After the Reformation , Degow was the seat of an evangelical parish , to which Degow and the neighboring towns of Ganzkow , Mechenthin and Stöckow also belonged. It was located in the Kolberg parish in the eastern district of the church province of Pomerania of the Church of the Old Prussian Union . In 1940 the parish had 2000 parishioners.

From the Reformation to 1945 the following Protestant pastors were in office in Degow:

Ernst Ostermeier retired in 1938. The position was not finally filled until 1945. In 1939 the military pastor Wilhelm Czeckay was provisional pastor in Degow.

Roman Catholic parish and clergy since 1945

Since 1945 mainly Roman Catholic residents have lived in Dygowo. The place is still the seat of a parish, to which today, however, the subsidiary churches Czernin ( Zernin ) and Świelubie ( Zwilipp ) belong. It is located in the Gościno deanery ( Groß Jestin ) in the Köslin-Kolberg diocese of the Catholic Church in Poland and has around 3100 parishioners.

The previously evangelical church was expropriated in favor of the Catholic Church and was re-consecrated on May 30, 1946 as Kościół Wniebowstąpienia Pańskiego (Church of the Ascension of Christ ).

Connected to the place