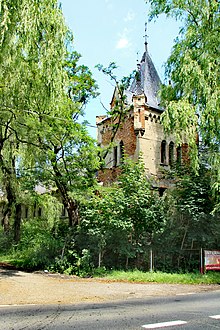 Choltitz was born in the family castle Graeflich Wiese near Neustadt in Upper Silesia . His father Hans von Choltitz (1865-1935) was a major in the Prussian Army . He fought in Flanders during the First World War , but mainly on the Somme , and was last since February 9, 1918 commander of the Uhlan regiment "Prince August of Württemberg" (Posensches) No. 10 . His mother was Gertrud, née von Rosenberg (born April 5, 1865); his uncle, Hermann von Choltitz (1868–1947), was from 1907 to 1920 the general president of the Silesian landscape.

From 1907 Choltitz attended the cadet corps in Dresden ; During this time he also served as a page at the royal Saxon court. On March 6, 1914, he joined the 8th Infantry Regiment "Prince Johann Georg" No. 107 of the Saxon Army in Leipzig as an ensign . With this he was deployed on the western front after the outbreak of the First World War , where he was promoted to lieutenant on October 16, 1914 and wounded shortly afterwards. From January 30 to March 31, 1915 he acted as a company commander and was then adjutant of the III. Battalions. Choltitz was then from July 31, 1916 to July 24, 1917 leader of the MG 649 supplementary platoon. Subsequently, he was used as an adjutant of the replacement battalion of his regular regiment. He held this position after the end of the war until January 17, 1919.

After the regiment was demobilized , Choltitz worked as a section adjutant at the Eastern Border Guard and was transferred to Grenzjäger Battalion 12 on May 5, 1919 . Just one day later he was assigned to the Soltau riding school . On October 1, 1919, Choltitz was accepted into the Provisional Reichswehr and transferred to the Reichswehr Infantry Regiment 38. After a year he was transferred to the 11th Infantry Regiment and two months later he was transferred again, this time as an squadron officer in the 12th (Saxon) Cavalry Regiment . From January 10 to May 20, 1922 he was assigned to a training course for cavalry intelligence officers. Choltitz then did military service again and became an orderly officer and leader of the intelligence train at the regimental headquarters in Dresden with effect from February 1, 1924 . In this function he was promoted to first lieutenant on November 1, 1924 . From October 3, 1927 to February 15, 1928 he completed an officer's weapons training course, was transferred to the 4th Squadron on October 15, 1928 and its chief six months later . Choltitz held this position until September 30, 1934 and was promoted to Rittmeister on April 1, 1929 . On August 20, 1929, Dietrich von Choltitz married Huberta von Garnier. On August 1, 1935 he was first major and from February 1, 1937 commander of the III. Battalion of the 16th Infantry Regiment in Oldenburg . On April 1, 1938, he was promoted to lieutenant colonel.

After the beginning of the Second World War , Choltitz's battalion was mainly involved in the 1940 occupation of the Rotterdam bridges by airborne troops. For this he received the Knight's Cross of the Iron Cross on May 18, 1940 . In September 1940 von Choltitz became commander of the 16th Infantry Regiment, since 1941 as a colonel . During the war against the Soviet Union , von Choltitz's association, as part of the 17th Army, played a key role in the conquest of Sevastopol in June 1942. In 1942 he was promoted to major general and in 1943 to lieutenant general . He commanded z. B. the 11th Panzer Division and - on behalf of Lieutenant General Walter Hahm - from August 27 to October 6, 1942 the 260th Infantry Division , was deputy commander and later commander of various army and tank corps; from March 1944 in Italy and from June 1944 on the Western Front . Shortly before the Americans broke out of the landing head in Normandy , von Choltitz was the commander of a corps of the 7th Army deployed in the western section there . From July 25, 1944, his corps was involved in the fighting in connection with Operation Cobra , where it suffered heavy losses.

On August 1, 1944, Choltitz was promoted by Hitler to general of the infantry and appointed commanding general and Wehrmacht commander in chief of Greater Paris. He set up his headquarters in the Hôtel Le Meurice . Choltitz arrived in Paris on August 9, 1944 - as the successor to Hans von Boineburg-Lengsfeld (who had been recalled following the failed Hitler assassination attempt on July 20, 1944 ). In the following 16 days he opposed several orders from Adolf Hitler to defend Paris to the last man or to leave it as a destroyed city. 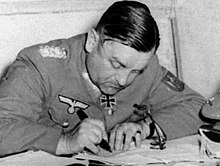 Through a mixture of active contact with the Resistance and demonstration of strength in the form of military parades and threats, Choltitz prevented a riot and uprising among the population. The Swedish consul general in Paris Raoul Nordling was able to prevent the demolitions ordered by Hitler in August 1944 through his mediation between the French resistance movement and the German city commander. Choltitz was therefore later referred to by some as the “savior of Paris”.

According to another account, on the one hand, Choltitz did not have the appropriate military resources for such extensive destruction; on the other hand, he was warned several times by the Allies that he would be treated as a war criminal and not just as a prisoner of war if he carried out the destruction order. He also had his headquarters defended to the last and only signed the surrender after his capture - he chose this route (after Collins / Lapierre ) so as not to fall into the hands of the Resistance or the mob.

He handed the city over to Major General Leclerc on August 25, 1944 at 2:45 p.m. as representative of the regular French armed forces.

Choltitz was taken to the British POW camp in Trent Park , where the officers' conversations were secretly wiretapped and recorded. For the first time closer connections between Choltitz and the resistance became clear.

According to the eavesdropping protocol (preserved in copies) of August 29, 1944, Choltitz said: "The most difficult assignment I have ever carried out - but then carried out with the greatest consistency - is the liquidation of the Jews." Choltitz was one of the commanders in 1941/42 Regiment in the Crimea. In addition, Choltitz was one of the few generals who acknowledged their personal responsibility.

In April 1947 Choltitz was released from captivity . He stayed in Baden-Baden-Lichtental until his death and died on November 5, 1966 of a long-term war disease ( emphysema ) in the city hospital in Baden-Baden. On November 9, 1966, in the presence of high-ranking German officers (Major General Paul Köhler and Major General Otto Lechler, among others as a delegation from the Federal Ministry of Defense ) and high-ranking French officers (Colonel Wagner, City Commandant of Baden-Baden, Colonel de Ravinel and others) at the main cemetery in Baden- Baden is buried.