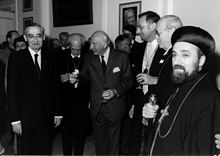 Eduard Lohse (born February 19, 1924 in Hamburg ; † June 23, 2015 in Göttingen ) was a German Lutheran theologian , professor of the New Testament, rector of the Georg-August University of Göttingen and regional bishop of the Hanover regional church .

Lohse attended the learned school of the Johanneum in Hamburg (Abitur 1942) and did military service from 1942 to 1945 as a speedboat commander in the Navy . From 1945 to 1949 he studied theology at the Bethel Church University and at the Georg-August University in Göttingen , where he received his doctorate in 1949 with his dissertation on ordination in late Judaism and the New Testament . From 1950 to 1953 he worked as a Konviktsinspektor at the Church College in Hamburg, which was then integrated into the University of Hamburg, as a vicar and assistant preacher. In 1953 he completed his habilitation with his work on martyrs and servants of God: Investigations into the early Christian proclamation of Jesus Christ's atonement at the Johannes Gutenberg University in Mainz , where he was a private lecturer for the New Testament until 1956 .

On November 24, 1970, he was elected regional bishop of the Evangelical Lutheran Church of Hanover. He took up this post after the end of his rectorate in the summer of 1971 and held it until 1988. From 1979 to 1985 he was chairman of the Council of the Evangelical Church in Germany (EKD). During his time as chairman of the council of the EKD and the German Bible Society, the revision of the Luther Bible fell in 1984. It was "the most important document in the German language". On the other hand, he described the Bible in fair language as an “unsuccessful undertaking” , in which, among other things, findings from feminist and liberation theology are processed. In 1988 he also became President of the World Federation of Bible Societies.

Eduard Lohse was the older brother of the Hamburg theologian Bernhard Lohse . The human medicine and pharmacologist Martin Lohse is one of his three children. He was married to the student teacher Roswitha Lohse-Flitner. He was buried in the cemetery of the Loccum monastery.

Regional bishops of the Evangelical Lutheran regional church of Hanover

Abbots of the Loccum monastery in Protestant times