The title of this article is ambiguous. Further meanings are listed under Erich Koch (disambiguation) . 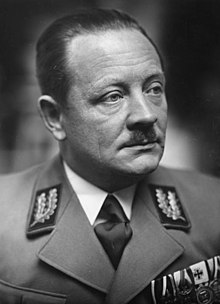 Erich Koch (born June 19, 1896 in Elberfeld , Rhine Province , today in Wuppertal ; † November 12, 1986 in the state prison in Barczewo , Olsztyn Voivodeship , People's Republic of Poland ) was Gauleiter of the NSDAP in East Prussia from 1928 to 1945. During World War II he was head of civil administration in the Polish district of Białystok from 1941 to 1945 and from 1941 to 1944 Reichskommissar of the Reichskommissariat Ukraine . Extradited to Poland by the British military government in Germany in 1950, he was sentenced to death there in 1959. The sentence was commuted to life imprisonment a year later.

Erich Koch was born as the son of master craftsman Gustav Adolf Koch (1862–1932) and his wife Henriette born. Matthes (1863–1939) born. After completing a business apprenticeship, he went to the Prussian State Railways as a candidate for middle service . In the First World War he was a soldier from 1915 to 1918. Afterwards he fought as a member of a volunteer corps against the uprisings in Upper Silesia .

With membership number 90 , he became a member of the National Socialist German Workers' Party in 1922 . From 1922 he worked in various functions for the Ruhr district administration. During the battle against the Ruhr he belonged to Albert Leo Schlageter's circle . In 1926, Koch became a member of the newly established NSDAP and was dismissed from railroad service because of his political activities. In 1927 he became district leader of the NSDAP in Essen , later deputy Gauleiter of the NSDAP-Gaues Ruhr. 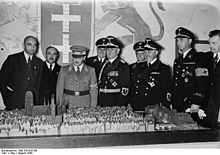 Without ever having belonged to a student union, Koch became an honorary member of the Königsberg VDSt in the Association of German Students' Associations in 1933 . His appointment was announced on July 31, 1933 at the Kommers of the 48th Königsberg Foundation Festival. The connection was probably brought about by Hermann Bethke , who was Vice President of the Königsberg High Presidium under Koch.

With the help of the Erich Koch Foundation , the Gauleiter made himself the richest man in East Prussia. Koch's corruption was hardly known to the public and Hitler accepted it. Koch was the first Gauleiter to report the alleged elimination of enormous unemployment, despite the fact that his Gau was the structurally weakest in the Reich. According to Nazi standards, Koch was also successful in bringing the administration into line and in combating the political and ecclesiastical opposition. East Prussia was considered a NS model district. In 1935 there was a power struggle between Koch and others; Bach-Zelewski collected hundreds of witnesses against him. Koch was transported to Berlin on November 26, 1935 and relieved of all his offices. On December 22nd, however, Hitler reinstated Koch in his old power; From then on, Himmler only spoke of "that bastard cook". In 1938 Koch was appointed Obergruppenführer (SA) . 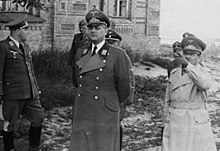 With the beginning of the Second World War , Erich Koch was appointed Reich Defense Commissioner for East Prussia ( Military District I ). After the invasion of Poland , he had the administrative district of West Prussia on October 26, 1939 the new Reichsgau West Prussia (later Danzig-West Prussia ) assign, but got for the new Zichenau added (in Poland Ciechanów). This comprised only Old Polish territory and reached over the banks of the Vistula and Narew . After the attack against the Soviet Union , Koch was appointed "civil commissioner" on August 1, 1941. As head of the civil administration in the Białystok District , he was responsible for defining and implementing the occupation policy until 1945.

From September 1, 1941, he also took on the functions of a Reich Commissioner for the Reich Commissioner for Ukraine . This made Koch the most powerful man in Eastern Europe. His "domain" extended in September 1942 from Königsberg via Zichenau, Białystok , Kiev , Nikolajew and Poltava to the Black Sea and the east side of the Dnieper . It covered German, Polish and Ukrainian territory.

During the arrest of civilian workers for forced labor in the German Reich, he worked with the general agent for labor, Fritz Sauckel . He played a leading role in the genocide of Polish and Ukrainian Jews in his area of ​​responsibility . Under his rule, the secondary schools and universities were closed because the German leadership wanted the Ukrainians to remain uneducated. In order to supply the Wehrmacht and the German civilian population with food, these were transported from Ukraine in such large quantities that the local population was extremely poorly supplied.

On November 25, 1944, when the Germans withdrew, he was appointed head of the Volkssturm in East Prussia. In the spring of 1945 Koch was urged several times by General Otto Lasch , the commander of the city of Königsberg, which had been declared a fortress, to hand over the city, which had already been in ruins due to the air raids on Königsberg, to the Soviet troops, who had been encircling Königsberg since January 31, 1945 had. Koch always refused this on the grounds that Lasch was a soldier and had to fight as such ("You don't surrender so easily! Surrender is a question of honor!"). In fact, Lasch only surrendered when Soviet soldiers appeared in front of his command bunker on Paradeplatz on April 9, 1945. For this he was condemned by Hitler in absentia to demotion for cowardice in front of the enemy and to death and his relatives to kin imprisonment. This procedure is said to have been triggered by a telegram from Koch with the wording: “The commander of Königsberg, Lasch, used a moment of my absence from the fortress to cowardly surrender. I keep fighting in Samland and on the Spit. "

With the so-called "Gauleiterzug" Koch left the Königsberg Nordbahnhof on the night of January 22, 1945. In the enclosed Königsberg, leaflets of the National Committee Free Germany appeared with the headline "Where is Volkssturmmann Koch?" The statement made there that Koch was the first Volkssturmmann to leave Königsberg was "heavily discussed" among the population. Koch flew several times to the besieged Königsberg to coordinate various measures, the last time probably on April 4 and 5, 1945, immediately before the start of the Soviet attack. In addition, he moved his headquarters to the embattled Heiligenbeiler Kessel in the first weeks of February in order to organize the evacuation of the refugees over the ice of the Frischen Haff .

Erich Koch fled on April 24, 1945 by plane from Pillau -Neutief to the Hela peninsula , from where he was able to escape the advancing Red Army troops across the Baltic Sea on April 27, 1945 on the deep-sea icebreaker East Prussia, which was kept ready for him . On April 29, 1945 he reached Saßnitz , which was also threatened by the Red Army, on April 30, 1945 Copenhagen and on May 5, 1945 Flensburg . There he assumed a new identity by having false papers issued. He shaved off his "Hitler mustache" and now wore glasses for camouflage (see Rattenlinie Nord ). This actually protected him from discovery: when he was picked up by a British commando while still in Schleswig-Holstein , he was not arrested, but instead sent to the prisoner-of-war camp - and former labor camp - Wolfsberg near Hasenmoor near Hamburg under his false name . After the camp was closed, Koch remained in the associated community. He rented a lonely house that housed other refugees. There he lived very withdrawn and had a very decent relationship with his neighbors, whereas during his service as Gauleiter he had shown himself to be domineering and choleric.

He earned his living through representation, occasional farm work and the income from a small garden plot that he cultivated. After the currency reform in 1948, he received unemployment benefits of 18 marks. As a wanted war criminal he could not use two properties belonging to him in West Germany; he passed himself off as "former major in the reserve Rolf Berger". When he was arrested in May 1949, however, he still had almost DM 250, which was a considerable amount for an allegedly wealthy refugee barely a year after the currency reform.

He was arrested on May 24, 1949 when he, the former Reich speaker , spoke at a public refugee meeting and was elected chairman of the meeting. He was recognized and displayed. On the evening of the same day he was visited and arrested by a British officer and a German detective.

Like all high NSDAP party functionaries, Koch carried two poison ampoules with him, but did not use them. He immediately confessed his true identity to the German judge; He pointed out that, as a German, according to the provisions of the Basic Law that came into force three days ago, he was not allowed to be extradited abroad. However, the Hamburg-Bergedorf Chamber of Justice issued an arrest warrant on the grounds that after September 1, 1939 he was a member of a criminal organization and belonged to the corps of political leaders of the NSDAP , and that there was a risk of escape. On June 10, 1949, he was transferred to the Bielefeld Court of Justice . There he was taken into solitary confinement and subjected to the strictest mail and visitor controls, as it was feared that he could be freed by former National Socialists.

On July 2, 1949, the British occupation authorities notified the Polish authorities of Koch's arrest and offered to extradite him. Poland applied for this on July 24th, and the Soviet Union followed suit on August 6th. On October 7, 1949, Koch was handed back to the British occupation authorities and brought before an "extradition tribunal" in Hamburg, since it had already been determined in 1943 that German war criminals should be tried in the countries in which they had committed their crimes. Koch was charged with war crimes under Control Council Act No. 10 , Article II. The representatives of Poland and the Soviet Union presented extensive evidence. In December 1949, the British occupation authorities asked Poland to pick up Koch from the Werl military prison . Poland was given preference over the Soviet Union because it filed the extradition request earlier and presented the more conclusive evidence. Koch went on a hunger strike on December 31, 1949; he could not prevent his extradition.

Trial and sentencing in Poland

On January 10, 1950, Koch was brought to Warsaw via Helmstedt and Küstrin , where he was imprisoned in Mokotów prison. He delayed the start of the trial until January 9, 1957 and also made several requests for clemency in autumn 1957. Several charges were dropped due to an amnesty law dated April 27, 1956. The court also limited itself to hearing only Koch's crimes on Polish territory. Therefore, his crimes in Ukraine were not the subject of the trial. A witness prepared by the Stasi testified, to the astonishment of the Polish public prosecutors, that Koch had given the order to shoot the Polish officers in the Katyn forest , but the court ignored this statement. On March 9, 1959, he was sentenced to death by the Polish court in Warsaw for war crimes against Polish citizens . However , he was spared execution because he suffered from chronic bladder cancer and death sentences in Poland were only carried out on healthy convicts. In his closing remarks in court, Koch expressed incomprehension about having to answer in court, while his former close colleague Theodor Oberländer was unmolested in Bonn minister . In 1960 the sentence was commuted to life imprisonment.

It was also assumed that Koch had information about the whereabouts of the Amber Room . The Polish secret service SB and the Soviet KGB tried together to elicit information from him. Koch also hinted at this in his will written down in 1967 before an operation . The will reappeared in Poland in 2003 and was sold to Germany by a former prison guard along with other personal notes and letters.

From 1965 he was imprisoned in the prison of Barczewo (Wartenburg), a former monastery. In the following years, Koch's physical and mental condition deteriorated more and more. Forgotten in Germany, he died on November 12, 1986 at the age of 90 in Barczewo prison.