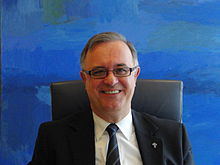 Frank Otfried July (born July 17, 1954 in Darmstadt ) is a German Protestant pastor and regional bishop of the Evangelical Church in Württemberg .

After studying Protestant theology in Tübingen and Vienna (1975 to 1980), he was vicar in the parish of Betzingen from July to 1983 . He then became a scientific and theological assistant for the subject of philosophy of religion at the theological faculty of Heidelberg University . In 1987 he took over the management of the bishop's office in the Evangelical Church in Württemberg as personal advisor to the then Württemberg regional bishop Hans von Keler . In the same office he also served from Keler's successors Theo Sorg and Eberhardt Renz . From 1996 to 2005 he was the leading pastor and director of the Evangelical Diakoniewerk Schwäbisch Hall.

In the election of the bishop of the Württemberg Evangelical Regional Synod on March 10, 2005, July was elected in the first ballot for the Regional Bishop of the Evangelical Church in Württemberg. He was introduced to his new office on July 23, 2005 in the Stiftskirche Stuttgart as the successor to Gerhard Maier . As one of the last leaders of an EKD church, he will hold the office without a time limit until his retirement. One of the most important successes of his tenure in 2007 was the conclusion of a state church treaty between the state of Baden-Württemberg and his and the Baden regional churches .

In addition to his office as bishop, July has a number of other functions and honorary offices. From 2010 he was chairman of the Diaconal Council of the Diaconal Work of the EKD , which was merged into the Evangelical Work for Diaconia and Development (EWDE) in 2012 . He is still a member of its supervisory board today. He is also a member of the 40-member Central Committee of the Conference of European Churches and the Council of the Lutheran World Federation ; from 2010 to 2017 he was one of its seven vice-presidents. He is also a member of the board of trustees of the ProChrist evangelical association . July has been chairman of the German National Committee of the Lutheran World Federation since December 2018.

July is married to his wife Edeltraud. The couple have four children.

Acting bishops, regional bishops, presidents and church presidents of the member churches of the Evangelical Church in Germany

Consistorial presidents, church presidents and regional bishops of the Evangelical Church in Württemberg