Boxwood is a redirect to this article. See also: boxwood (disambiguation) .

The ordinary book tree ( Buxus sempervirens ), even boxwood or book called, is a plant from the genus of the boxwood ( Buxus ). He is in South West Europe , Central Europe , North Africa and West Asia home.

The name comes from Latin buxus from Greek pýxos , the name used by Theophrastus for a plant that was later interpreted as boxwood. Theophrastus was ambiguous in his description and his manuscripts have been lost.

The heavy boxwood is valued in turnery to this day , and the ancient Roman writer Pliny reported that boxes and boxes were made from the wood of the boxwood. It is therefore assumed that the terms Büchse , box ( English ) and boîte ( French ) developed from pyxis . 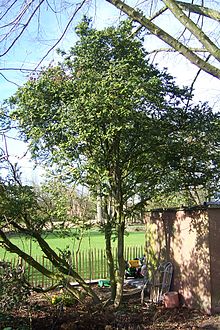 Buxus matured to a tree (estimated height about 6 meters)

The constantly against arranged on the branches leaves are tight. The simple leaf blades are 1 to 2.5 centimeters long and about half as wide and ovoid to oblong-elliptical. The upper side of the leaf is glossy dark green and the underside is significantly lighter and matt. The leaf margin is bent down.

The boxwood is single-sexed ( monoecious ). From March to May, inconspicuous, yellowish, fragrant clusters of flowers appear in the leaf axils . Each ball usually consists of a terminal female flower and several lateral male flowers. There is no corolla , there are only several very small bracts and sepals. The female flowers have three styles , each with a two-part stigma, the male flowers each have four stamens .

The flowers produce abundant nectar and pollen and are therefore often visited by bees and flies. The beech tree is an important bee pasture because of its flowering early in the year .

The scent of the seed warts attracts ants that carry the seeds away ; This means that the boxwood - together with the broom - is one of the few Central European trees whose seeds are spread by ants ( myrmecochory ).

The box tree prefers an oceanic climate. Its original distribution area extends in a north-westerly direction from the Mediterranean via France to southern England. In an easterly direction it can be found as far as Northern Iran . In Europe it occurs in two main areas, on the one hand from southwest France to northern Spain, on the other hand in the Balkans . Other wild occurrences are single areas. Original locations can only be found in Germany in the Buchswald near Grenzach ( district of Lörrach ) and on the Moselle, for example in the Kehrbachtal of Löf . On the Moselle it thrives in the association Aceri monspessulani-Quercetum, otherwise in Buxo-Quercetum from the Association Quercion pubescenti-petraeae.

The box was and is often planted as an ornamental and useful wood and, as a garden refugee, occasionally occurs overgrown.

The box tree as a garden plant

Box trees as ornamental plants in a garden near Bern- Riedbach.

Due to mutations and after centuries of selection , today more than 60 Buxus sempervirens varieties can be differentiated, primarily on the basis of leaf color, leaf spacing, leaf size, leaf shape, growth habit and growth speed.

The boxwood plays an important role in gardening . He was already known to the Greeks; the Romans framed their garden beds with low box hedges. Archaeological finds in Great Britain show that the Romans also cultivated this type of garden design in the areas they conquered in Central and Western Europe. Whether this tradition continued when they lost the territories they had conquered during and after the migration period has not yet been fully clarified. In the 13th century Albertus Magnus documented the cultivation of the box tree in Germany. Exact source is missing! In 1485, Leon Battista Alberti , inspired by Pliny the Younger, wrote in his book De re aedificatoria about the Buxus as a garden plant.

It was only Claude Mollet , Henry IV's court gardener, who really introduced the boxwood and used the hardy plant as a border in Versailles , where it had previously only served as background planting in the grottos . It replaced the cypress that was taken over from Italy and did not withstand the French winter. The French nobility soon imitated the model of this parterre . His son André Mollet introduced the box hedges in the Netherlands, where he designed the garden of the governor Prince Friedrich Heinrich of Orange and his wife Amalie zu Solms-Braunfels in Honselaarsdijk . In the French and Italian palace gardens of the Renaissance , the cut, low box trees became an indispensable and typical element; increasingly they came into fashion in Central Europe. Wealthy citizens and farmers imitated this fashion, so that the traditional cottage gardens still have boxwood edging to this day.

The use of the boxwood as a garden plant continued during the Baroque period (see topiary ), at the same time varieties with variegated leaves became increasingly popular.

The boxwood is usually propagated by cuttings , because the cultivation from seeds is very tedious (see plant propagation ). Twigs at least ten centimeters long are used as cuttings, the lower two thirds of which are defoliated and stuck into the ground. Cuttings are taken in late summer; August cuttings form roots before winter.

Although almost all Buxus sempervirens varieties are robust, fungal infections occasionally occur. These are particularly noticeable when the population is close in hedges or borders. The susceptibility of the stand increases with soil and foliage moisture. With all diseases, the complete removal of the infected parts of the plant is advisable; these do not belong in the compost, but should be burned. If necessary, the floor may even have to be replaced. Sufficiently aerated stands, cutting back suspicious parts of plants and giving copper sulphate are considered preventive measures . 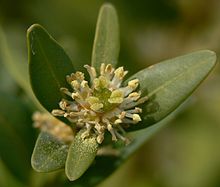 Flower clusters with a female flower in the middle, including several male ones

The boxwood is poisonous in all parts; it contains around 70 alkaloids , including cyclobuxin D. Leaves and bark have a total alkaloid content of three percent.

Boxwood was already used in antiquity against coughs, stomach and intestinal diseases and against recurring fevers such as malaria . Allegedly, boxwood is comparable to quinine as a malaria remedy . Nowadays boxwood is rarely used as a medicinal herb because of its toxicity , as the dosage is problematic. Overdosing leads to vomiting and convulsions up to death.

Use of the wood

Adam and Eve made of boxwood, carved in 1504 by Hans Wydyz . Today in the Basel Historical Museum

Boxwood is valued for its hardness, density (0.9–1.03 g / cm³) and approximate homogeneity, which is unsurpassed in Europe, and is popular for turning. It is still used today in woodwind instrument making , violin making (pegs, end buttons, tail and chin rests) and for chess pieces . Before the introduction of lithographic and phototechnical reproduction processes, the printing blocks for wood engravings and woodcuts were preferably cut out of it, especially in letterpress printing , whereby the polished end- grain side was processed as with steel or copper engraving and used for the finest detailing and durability. Even the cleaning wooden watchmaker is usually made of boxwood.

Because of its hardness, boxwood was already used by Neanderthals to make grave sticks 171,000 years ago .

The hardness of the wood is not insignificantly related to the extremely slow growth of the tree. Boxwood is therefore very scarce and expensive to this day.

On Palm Sunday, Catholics decorate the crosses of their homes and the crosses of the Herrgottswinkel with consecrated branches of the box tree. Box tree branches are occasionally used instead of fir branches for Advent wreaths and Christmas decorations. In the Netherlands, box branches were hung over stoves and on stable doors at Easter.

In China , the box tree is a symbol of longevity.