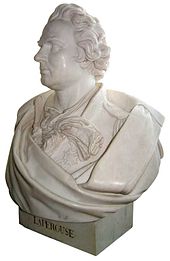 Jean-François de Galaup de La Pérouse (Lapérouse; born August 23, 1741 in La Gua near Albi , † 1788 near Vanikoro , Solomon Islands ) was a French navigator, circumnavigator and geographer in the Age of Enlightenment .

La Pérouse came from a patrician family in the old south-west French town of Albi in Languedoc . At the age of 15, La Pérouse went to Brest and embarked on a career in the French Navy . The officers were split into noble 'reds' and bourgeois 'blues'. To make a better career, La Pérouse added a title of nobility to his family name de Galaup , which refers to a small family farm outside Albi called La Peyrouse .

The Seven Years War that just broke out took La Pérouse to Québec, among other places . The return of circumnavigator Louis Antoine de Bougainville to France in 1769 inspired La Pérouse to do similar things.

From 1772 to 1776, La Pérouse sailed on behalf of the French governor in the Indian Ocean between the French-ruled colonies of Mauritius , Réunion , Pondicherry in southern India and Madagascar , where he completed his geographical knowledge.

La Perouse took part in the American Revolutionary War for the French . He commanded a squadron and took Fort Prince of Wales without a fight in August 1782 , where he captured the English explorer Samuel Hearne .

On his return, La Pérouse was knighted and promoted for special merits. When France wanted to undertake a similarly prestigious trip after the discoveries of the British James Cook , the choice of King Louis XVI fell. 1785 on La Pérouse.

Two ships - the Astrolabe and the Boussole - were equipped and a top-class team of scientists from the fields of astronomy , mathematics , geology , mineralogy and botany were put together for the trip. Her task was to research the geography of the Pacific and the trade opportunities there, from the far north to Australia , from Asia to America .

On August 1, 1785, the two ships set sail from Brest . The first stop was Tenerife . In January 1786 Patagonia was reached. Via Cape Horn and Easter Island we went to Hawaii and on to Alaska . La Pérouse, who counted himself among the Enlightenmentists , was the first European to consciously refrain from taking possession of as yet unexplored islands. In Alaska, he made important contacts with Indians before traveling the California coast .

The winter was used to cross the Pacific. In January 1787, the two ships landed in Macau . Now the little-known East Asian tributaries , the Chinese Sea and the Japanese Sea , have been systematically explored and mapped, as has the large Siberian peninsula of Kamchatka , which was interesting because of the abundance of fur .

In Petropavlovsk (today: Petropavlowsk-Kamchatsky ) the interpreter Jean Baptiste Barthélemy de Lesseps disembarked on September 29, 1787 . He crossed Kamchatka and Siberia and reached Paris via Okhotsk , Irkutsk and Saint Petersburg , after a year-long journey, in October 1788 . He delivered the first reports of the world tour there at a time when La Pérouse and his people were probably no longer alive.

After Sakhalin and the Japanese Kuriles had been explored, the South Seas were headed for . On the Samoan island of Tutuila , the second captain and close friend of La Pérouse, the scientist Paul Fleuriot de Langle (1744–1787), was killed by locals on December 11, 1787 . From now on the trip was not a lucky star.

La Pérouse sailed to Australia . In the Botany Bay , the English just justified Sydney . In February 1788, La Pérouse sent a message back home with the further planned route: via Tonga , New Caledonia and the Solomon Islands , it should go to New Guinea .

But La Pérouse achieved none of these goals. Both ships and their crew disappeared without a trace. It is believed that the ships got caught in a tropical cyclone . The expedition was passionately followed in France and, despite the French Revolution that began in 1789, two ships were equipped to search for La Pérouse in 1791. But the rescue operation was not successful. The captains d'Entrecasteaux and Houn Kermadec died on the voyage in 1793 and the crew returned without result.

The fate of the two ships Astrolabe and Boussole remained unclear for many years until the British merchant captain Peter Dillon , owner of the barque St. Patrick , came to Tikopia on May 23, 1826 . Thirteen years earlier, Dillon had dropped a Prussian named Martin Buchert (or Bushard) and a Laskar named Joe and his Fiji wife there at his own request. When the St. Patrick dropped anchor, Buchert and Joe came on board. Joe owned, as Dillon writes in his "Narrative", the silver crossguard of an old sword, which he offered for sale to a crew member. In response to Dillon's question as to how this object, which was clearly of European origin, could have got to the remote Tikopia, Buchert said that the natives brought the crossguard, several pieces of silver cutlery, as well as iron nails, axes, teacups, glass bottles and other parts from a distant island called " Manicolo ”( Vanikoro ). The natives of this island have even more such items, which would have come from two ships that were wrecked there in a violent storm many years ago ("when the old men of today were still young"). Six years ago (1820) one of the Tikopians would have seen two crew members from these ships and spoke to them. Dillon, who identified the parts as presumably of French origin, decided to sail to Vanikoro, suspecting the items came from the missing La Pérouse expedition. The St. Patrick reached Vanikoro two days later, could not land because of unfavorable wind and current conditions, but was forced to cruise off the coast for seven days. However, because the ship was leaking, supplies were limited and the owner of the cargo the St. Patrick was carrying objected, Dillon decided to abandon the project, sail to Calcutta immediately and later return to Vanikoro. He reached India with some difficulty. In Calcutta, a French artist identified the sword bar as being made in Versailles and about forty years old. The initial "P." and the fleur de lys were very faint .

On September 8, 1827, Dillon returned to Vanikoro with the research and found numerous other relics that could be assigned to the missing French ships - and La Pérouse personally. He brought them to France in 1829, where King Charles X appointed him Knight of the Legion of Honor and granted him an honorary salary .

Jules Dumont d'Urville reached the island of Vanikoro in 1828, recovered further parts of the wreck and brought them to France. 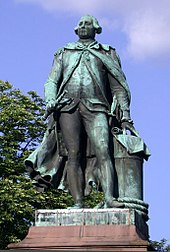 La Pérouse is revered in France and the Pacific to this day. Not only were several ships of the French Navy named after him, but also: