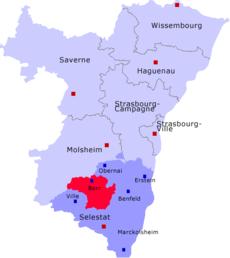 The Canton Barr was 2015 a French constituency in the Arrondissement Erstein , in Bas-Rhin region and in the region of Alsace .

16 communities belonged to the canton:

Cantons in the Bas-Rhin department