The title of this article is ambiguous. Further meanings are listed under Langau (disambiguation) .

Langau is a market town with 676 inhabitants (as of January 1, 2020) in the Horn district in Lower Austria .

Langau is located in the north of the Waldviertel in Lower Austria on the border with the Czech Republic . The next larger towns are Drosendorf in the northwest and Geras in the southwest. The area of ​​the market town covers 22.2 square kilometers, around 14 percent of the area is forested.

The market town of Langau is a member of the Taffa-Thaya-Wild region .

Around 1240, the monastery Klein-Mariazell received the village of Langenowe (i.e. Langau) on the other side of the Danube near Drosendorf with a parish, tithes, fields and a forest near Witersgelden (today Weitersfeld ) from Duke Friedrich II .

Langau was first mentioned in a document in 1245. At that time, the village already had 83 houses and was its own parish with Pernegg as the mother parish.

Langau was obviously very popular with pastors, because in 1398 the secular priest Michael von Grillenberg pushed himself into the parish against the will of the abbot of Kleinmariazell, but had to leave it again. But only a year later the secular priest Thomas Wagner appealed to a brief from Pope Boniface IX . But since this had been sneaked into, he had to leave Langau again and leave the invalid certificate behind.

On April 9, 1427, the Benedictine Petrus von Leesdorf near Baden near Vienna from the monastery Klein-Mariazell was burned at the stake by the Hussites .

Although Langau recovered after the Hussite Wars, it appeared in the feudal book of King Ladislaus Postumus with only 43 houses and 34 names. And there were even fewer, because from 1453 to 1600 raged again and again the plague .

Since the monastery Klein-Mariazell needed money to pay the Turkish tax, it was decided to sell Langau. On May 17, 1530, Johann Mrakesch von Noskau, Freiherr zu Litschau and landlord of Drosendorf, acquired the Langau parish. King Ferdinand I confirmed the sale on January 10, 1535.

Langau was devastated in the first years of the Thirty Years' War , the church and houses stood for a long time without roofs, and only the Drosendorf on the Thaya a few kilometers away offered protection .

The war was over, but the plague returned in 1640 and almost completely wiped out the local population.

In 1709 the church burned down and also affected the surrounding area. The church was rebuilt in the following years. In 1712 the first Kirtag of the newly built church was celebrated and Emperor Karl VI. came through the town on his coronation trip to Prague . The original of the inn bill has been preserved and is available in the Geras Abbey .

In 1868 the road from Langau to Oberhöflein and in 1905 the road to Riegersburg was laid. A memorial to the memory of the expulsion of the German population from Schaffa ( Šafov ) was erected on this road in 1987 near Langau - like so many others along the state border.

The first school building was built in 1878. It is still preserved and now serves as a municipal office.

The driving post from Frain an der Thaya via Schaffa ( Šafov ), Langau and Geras to Hötzelsdorf was opened in 1880, a year later Langau got its own post office at the community doctor.

In 1885 numerous barns burned down, on January 10, 1890 the volunteer fire brigade was founded.

In 1908, construction work began on the Retz –Langau – Drosendorf branch line , which was officially opened in August 1910. Scheduled passenger traffic was discontinued on June 10, 2001, there is only one “nostalgic train” during the warm season.

In 1910, lignite was discovered between Langau and Schaffa (Šafov) and the "Langauer Bergbaugesellschaft" was founded. The mining in the " Grube Austria " began only after the Second World War and was carried out in " opencast mining ", the coal was transported for rail loading by means of a cable car. After the mining operations were stopped, the pits filled with water. In addition, today's district of Freizeitzentrum-Langau was created with a shooting range, campsite and of course a swimming pool. The Lower Austrian water skiing championships and, more recently, triathlon events are held here again and again .

On July 29, 1914, the first three Langauers had to take up arms, and the church bells followed the following year. For this, the population received food stamps (20 dag bread / flour per day and person).

In 1948 bells were bought again for the church after the bells bought in 1922 had been withdrawn during the Second World War. The new schoolhouse was completed in 1952.

On May 9, 2006, a tourist border crossing for pedestrians and cyclists was opened between Langau and Šafov.

With the decision of the Lower Austrian provincial government of March 24, 1981, the municipality of Langau was awarded a municipal coat of arms. His blazon reads:

"In a shield divided from red to black by a silver wavy bar, at the top two silver halberds growing out of the shield section, turned towards each other, below mallets and irons in silver."

The community colors are red-white-black. 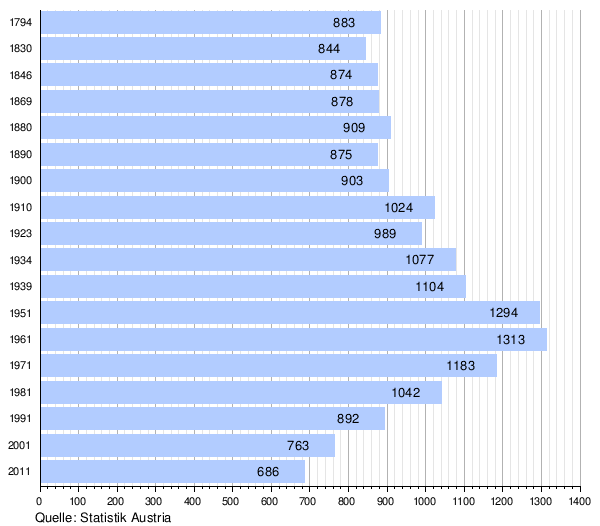 The municipal council has 15 members.

In 2001 there were 26 non-agricultural workplaces and 55 agricultural and forestry holdings according to the 1999 survey. According to the 2001 census, the number of people in employment in the place of residence was 296. In 2001, the activity rate was 40 percent.

Cities and municipalities in the Horn district