The Munich City Museum on St.-Jakobs-Platz in Munich's old town is supported by the Cultural Department of the City of Munich . It was founded on July 29, 1888 by the then city archivist Ernst von Destouches . The administration of the museum is located in the Ignaz-Günther-Haus , a late medieval house from the 15th century, in which there is a " ladder to heaven " that leads to the second floor.

Frauke von der Haar has been the museum director since January 2020 ; she is the successor to Isabella Fehle , who has headed the museum since 2010 and retired in November 2019.

The museum is located on a spacious area in the former armory of the city of Munich , in the Marstall and in three other adjoining construction phases. The city's armory was built in 1500 and is a late Gothic building . The late medieval stables were rebuilt after the Second World War.

The need for renovation of the city museum had been known since 1999. In July 2019, the Munich city council decided on a general renovation of the house, a new entrance and an extension in the inner courtyard, assuming 183 million euros plus 20 million euros for the redesign of the exhibition areas. As an alternative location for offices and restoration studios, premises on the Arri Group's main site in Türkenstrasse were rented for ten years. After the 2020 local elections , the green-red city council coalition postponed the renovation (now estimated at 140 million euros) until at least 2026; Director von der Haar said that this was the end of the general renovation.

The city museum on a drawing based on Sandtner's city model

Embedded in the cultural and historical context, everything that is typical of the city and its residents is presented in a tour over three floors. From the alleged collarbone of Duke Heinrich the Lion to the Allianz Arena , the exhibition illuminates Munich's cultural history from its founding legend to the present day. A point of attraction are the Morisk dancers from around 1480 by Erasmus Grasser (1450–1518), which were created for the ballroom of the Old Town Hall . The morris dancers are considered standard examples of the bourgeois art of the late Gothic period . A copy of the city ​​model of Munich by Jakob Sandtner from 1570 is also important. The grave relief of the Indian children Juri and Miranha has also been in the museum's possession since 1892 and was included in the exhibition Typically Munich! integrated.

On a total of 2400 m², the exhibition shows around 400 objects, starting with old Munich through stations such as the Kingdom or Schwabing Bohème to the 1972 Summer Olympics and the present. On display are the most important works that the Munich City Museum has collected since it was founded in 1888. The exhibition asks three questions: What is typically Munich, since when and above all why?

The exhibition only shows works from its own holdings and gives a comprehensive insight into the collection areas of the Munich City Museum: graphics, posters and paintings, furniture, sculpture, handicrafts, fashion, urban culture, photography, film, music and showmanship. With a view to making a selection, the holdings for the exhibition were scientifically reworked, cared for in terms of restoration and placed in the respective urban historical context.

At the center of the exhibition is the phenomenon of communal emancipation, in which the city has said goodbye to its history, which was dominated by courtiers, struggled for urban self-confidence and acquired the reputation of the “secret capital” of the Federal Republic. The permanent exhibition shows how this process has been in effect since the 19th century, since the 700th anniversary celebrations from 1858 until today.

For the structural implementation of the company, the Munich armory was completely renovated and equipped with modern museum technology. It is an act of monument preservation through which the building fits its historical significance into the new ensemble on St.-Jakobs-Platz with the Jewish community center and the Jewish museum .

The permanent exhibition National Socialism in Munich , which has existed since 2003, shows the origin, form and consequences of National Socialism in Munich between 1918 and 1945. The emphasis is on the special features that make the city the location of the NSDAP headquarters , the “ capital of the movement ” and the “ capital of the Germans Art ”. This includes information about actors and victims of persecution, about acceptance and resistance in Munich.

As part of the exhibition, a blue neon sign with the words "Kaufhaus Uhlfelder" was installed in the windows of the museum building facing Oberanger, which reminds us that part of the building is located on the site of the former Uhlfelder department store , which was looted during the pogrom night and its Jewish one Owner was expropriated by the National Socialists . 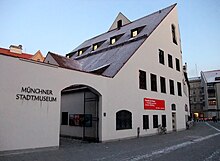 The Photography Collection, which opened in 1963 (at that time the Fotomuseum in the Munich City Museum ), is one of the leading photographic collections in Europe with a collection of over 500,000 photographs. The focus of the holdings lies in the period up to 1980, but is constantly being expanded with contemporary photographs. Through the purchase of the collection of the photographer and Jewish emigrants Josef Breitenbach 1977 600 originals internationally known photographers such as came Berenice Abbott , Robert Adamson & David Octavius Hill , Julia Margaret Cameron , Robert Capa , Alfred Eisenstaedt , Roger Fenton , André Kertész and Lisette Model at the photography collection, which is at the heart of today's image collections. The collection received an important addition in 1984 with the purchase of the Uwe Scheid collection on the history of photography in the 19th century, comprising over 1000 objects . In 1985 the Franz Hanfstaengl Foundation came to the museum. Numerous archives and estates have found their way into the collection since 1991, including the over 1,100 vintage prints from Herbert List's estate as well as extensive archives from Thomas Höpker , Barbara Lüdecke , Stefan Moses , Floris M. Neusüss , Norbert Przybilla, Regina Relang , Hans Schreiner and his Institute for Photojournalism , Frank Eugene Smith , Vladimir Vinski and the archive of the Illustrated Quick .

A public attraction is the one in its original state, in the permanent exhibition Typically Munich! presented Kaiserpanorama - a mass medium that was extremely popular in Europe around 1900 - which enabled 25 people to view three-dimensional cycles of domestic and foreign travel and city images at the same time.

The graphic and painting collection today comprises well over 200,000 objects. The focus is on Munich's city history. The collections from the 19th century are particularly extensive. The historical core of this collection comes from the purchase of the holdings of Joseph Maillinger (1831–1884), whose picture chronicle of the city of Munich comprises around 18,000 sheets. Other Monacensia collections are also worth mentioning, such as those of Franz Xaver Zettler and Carlo Proebst. In a cross-section of all holdings, the portrait archive contains around 20,000 portraits of Munich residents. A first selection is available in cooperation with the Bayerische Landesbibliothek Online (BLO).

The graphic and painting collection contains larger bundles of the following artists: Peter von Cornelius , Johann Georg von Dillis , Johann Georg Edlinger , Leo von Klenze , Wilhelm von Kobell , Moritz von Schwind , Carl Rottmann , Wilhelm von Kaulbach and Friedrich August von Kaulbach as well as the artist families Adam and Quaglio. The collections are further enriched by bequests from Munich artists. The graphic estate of the sculptor Ludwig von Schwanthaler , with over 2,000 study and design sheets, as well as the so-called "Krumper estate", a bundle of large-format architectural drawings from around 1600, which is of great importance in terms of art history, should be emphasized. The extensive estate of the symbolist Art Nouveau artist Carl Strathmann is also in the Munich City Museum.

The advertising art collection has been outsourced from the general collection of graphics and paintings and consists of over 30,000 posters from the 19th century to the present day. Around two thirds are related to advertising in Munich. One focus is the time around 1900.

Collection of puppet theater and showmanship 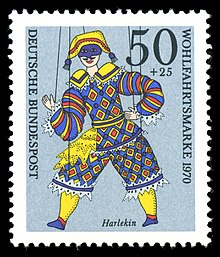 The Puppet Theater and Showmanship Collection of the Munich City Museum , which began in 1939 ( Ludwig Krafft ), has dealt with all areas of puppet theater since the 18th century. The internationally oriented collection of around 13,000 figures includes hand puppets, marionettes , stick and shadow figures with complete legacies, theater decorations and text books. The focus is on the collection of popular and artistic puppetry before 1945 in Germany. In addition, the collection of the music box - mechanical theater of Munich students (1955 to today) was almost completely collected, as well as the sets of figures from the puppet studio in Schwabing (since 1949). The former workshop of the Munich sculptor and puppet carver Walter Oberholzer can also be seen in its entirety. Oberholzer had also worked for the Munich Marionette Theater . In addition, the (1959) still accessible fund of the principal of the Marionette Theater of Munich artists before 1933 Paul Brann can be seen in a permanent exhibition. There are also rich stocks from other European countries as well as from Asia and Africa. The stock of mechanically movable figures and machines is a specialty.

Since 1980, the museum has expanded its interests in the field of showmanship with a view to the attractions of German fairs and festivals from the 19th century to the present day. The variety and circus categories are also taken into account. The museum department has become the central point of contact for questions about popular amusements. In addition to the permanent exhibition, which primarily illustrates the development of puppetry and showmanship in Germany, researchers have access to the specialist library, the archive and the graphics collection. In cooperation with the Munich association Society for the Promotion of Puppetry , the entire spectrum of puppet theater is maintained through performances by contemporary stages.

In addition to treasures of instrument making from different cultures, a cross-section of the variety of musical activity is offered. The collection, which is based on Georg Neuner's private collection handed over to the city of Munich in 1940, was relocated during the Second World War and was re-presented in the Munich City Museum in 1962, now comprises 6,000 objects, including around 1,500 instruments from Africa, Asia, and ancient America Europe, as well as the special area of ​​mechanical musical instruments with a large star orchestrion from 1880. Guided tours give you the opportunity to play under supervision on the gamelans from Java and Bali yourself. Evening concerts and Sunday matinées transform the exhibition rooms into a concert hall.

The Munich Film Museum has existed as a department of the Munich City Museum since 1963, making it Germany's first municipal cinema. The film museum presents outstanding works from all epochs of international film history in its cinema almost every day. Its archive includes classics from film history, some of which have been reconstructed over many years. These include silent film classics such as Die joyllose Gasse , Metropolis , The Golem, How He Came into the World and The Pharaoh's Wife , as well as the unfinished film fragments from the estate of Orson Welles . Often directors, actors and filmmakers are guests at the Filmmuseum, who discuss their works with the audience after the screening.

Municipal museums and collections in Munich