Nicolaus Hieronymus Gundlingius (also Nikolaus Hieronymus Gundling ; * February 25, 1671 in Kirchensittenbach ; † December 9, 1729 in Halle (Saale) ) was a legal scholar , early Enlightenment , royal Prussian privy councilor and consistorial councilor of the Duchy of Magdeburg. The polyhistor was a professor of natural law and philosophy as well as prorector of the Friedrichs University Halle / Saale . He is considered one of the founders of the doctrine of intellectual property and one of the most important natural law teachers of the 18th century.

Nicolaus Hieronymus Gundling was born as a scion of the Gundling family in Kirchensittenbach near Hersbruck near Nuremberg as one of three brothers, the most famous brother being Jacob Paul von Gundling . His grandfather was Johannes Vogel . His father Wolfgang Gundling died in 1689. His guardian sent him, after visiting the Aegidianum in Nuremberg, in 1689 to study theology and philosophy at the University of Altdorf near Nuremberg, where he studied with the theologian Johann Fabricius , who played a paternal role took over for Gundling. In addition to Fabricius, Magnus Daniel Omeis , who taught him excellent Latin and taught him poetry and rhetoric , had a great influence on him. He is also said to have sparked his enthusiasm for satire , to which he is said to have been inclined all his life.

In 1692 he went to the University of Jena , where he devoted himself to jurisprudence. There he befriends the lawyer and historian Georg Schubart , who also increased his enthusiasm for rhetoric and history. From 1694, after a short stay at the University of Leipzig , he stayed again in Altdorf and in 1698 came to Halle with a group of nobles, where he met Christian Thomasius (1655-1728), a well-known early enlightenment expert and lawyer at the University of Halle . encountered. This encouraged him to study law and to aim for a professorship in Halle. In addition to law, he also devoted himself to philosophy and history during this time. Gundling would subsequently become one of Thomasius' most important students.

Gundling received his doctorate first on April 23, 1703 as a licentiatus iuris , then as a " Doctorem Juris " on July 12, 1703, whereupon Eberhard Danckelmann made King Frederick I in Prussia aware of him. In 1705 Gundling turned down an offer from Altdorf, where the chair of his former teacher Johann Christoph Wagenseil became vacant, as he had already received a "Professio Philisophae extraordinaria" from Baron von Danckelmann. In 1707 he became a full professor of history and eloquence at the Philosophical Faculty of the University of Halle, which was only founded in 1694.

On November 17, 1707 Nicolaus Hieronymus Gundling married Sophie Auguste Krautt, later from the Barone von Krautt family, the marriage had five children. One of these sons is the Junker Johann Andreas von Gundling , who was involved in diplomatic disputes between Prussia and Stollberg.

On the 51st birthday of Friedrich I (1708) he gave an eulogy on behalf of the University of Halle , his first public appearance in front of a larger audience. On February 26, 1712, Gundling moved to the Faculty of Law in Halle as a full professor of nature and international law , and through this step became the Magdeburg Consistorial Councilor. In 1715 Nicolaus Hieronymus Gundling began to publish the "Gundlingiana". In 1719 he was appointed to the Privy Council and appointed to the chair for Ius Publicum in Halle. Gundling declined all calls to other universities.

On December 9th, 1729 Nicolaus Hieronymus Gundling died as "Prorector Magnificus" of the University of Halle in his second term of office. The funeral sermon was held by the theology professor Johann Jakob Rambach and then published. Gundling was buried in Halle's Stadtgottesacker in crypt arch 89.

Gundling is considered to be the main representative of Halle's constitutional and historical school , which was founded at the University of Halle, which is dedicated to the Enlightenment, as well as one of the founders of the doctrine of intellectual property , whereby he with his legal and fifteen-wise concern ... 1726 the first wrote a monographic on this topic. Gundling was influenced in Halle mainly by his teacher Thomasius, whose most important student he was. The doctrine Gundlings ranged from imperial history and -staatsrecht on international law , natural and canon law to Pandekten and literary history . His courses were praised for his excellent rhetoric and sharpness of mind, but also for the topicality and the "lively elements" maintained by Gundling. For the 18th century in particular, he is considered one of the most important natural law teachers.

In Dreyhaupt Gundling is from the perspective of his contemporaries as a "not alone ... scholar, but also a sincere and honest man ... whose Hertz [had] been immobile of truth and justice ...," described. Dreyhaupt further describes Gundling as a friendly, dedicated and talkative person who was kind to the poor. Gundling had a relationship with Johann Peter von Ludewig that was not only characterized by scientific controversy . Sometimes the law faculty tried to withdraw Ludewig's professorship because Gundling was considered to be intellectually superior, but this did not materialize. It is thanks to Ludewig that a large number of Gundling's polemics have been preserved.

From 1720 Gundling led a controversy with the Leiden scholar Pieter Burman the Elder about the use of the German language in science, in the context of which Gundling wrote the anti-Burmannianum program.

In order to implement the teaching practiced in Halle at the new University of Göttingen , Gerlach Adolph von Münchhausen , who was himself under the influence of Gundling, recruited some of Gundling's students to Göttingen, for example the first acting rector of this university Georg Christian Gebauer or Johann Jakob Schmauß and, in particular, to develop the law faculty, David Georg Strube . Gundling was formative for various other scholars, including Johann Ludwig Levin Gebhardi , Friedrich Wiedeburg and Gottfried Lengnich ; He even took in Johann Georg Estor like another son in his house.

One of the most prominent supporters of the Gundling school was Ludwig I, King of Bavaria , who was taught by Gundling students at the University of Göttingen . In honor of the pioneer of the "Germans Empire history," he dropped a marble bust of Fidelis Schönlaub skulpieren (1805-1883) in 1847, up to their damage in the Second World War in the pantheon of Bavaria in Munich stand. Today a plaque reminds of them.

Since the summer semester 2010, a Gundling professorship for intellectual property law has been established at the University of Halle , which is named after Nikolaus Hieronymus Gundling, who is considered one of the leading co-founders of intellectual property teaching . The Gundling Professorship is donated by the German Association for Commercial Legal Protection and Copyright (GRUR) and the Halle-Dessau Chamber of Commerce and Industry .

After Gundling was allowed to use the Krausesche library of the physician Christoph Krause at the beginning in Halle , he spent 200 thalers a month to set up his own library. By the time he died, the library had grown to 9,633 volumes, at the same time the Halle University Library also had around 10,000 volumes. Contrary to the assumption that Gundling had arranged his library according to the system of the French scholar Adrien Baillet or the polyhistor Petrus Lambeccius , who organized the imperial library in Vienna , as he recommended to his students, after Gundling's death it turned out that his Library in what appeared to be a mess. Nevertheless, Gundling seemed to have kept track of his library, because he had every book to hand when needed. After his death, the library was auctioned against his wish to make it available to the student body. 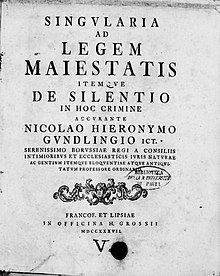 Nikolaus Hieronymus Gundling was an active academic writer in the early Age of Enlightenment . His writings are still often held in university and state libraries today. The contents of his works are very diverse, they range from the historical to the philosophical to the legal, and are largely written in German.

In 1711 Gundling took over the publication of the magazine Die Neue Bibliothek . During this time, this magazine received a lot of attention , especially due to Gundling's sharp reviews .

The Gundlingiana was a mainly authored by Gundling, published from 1715 until his death, scientific journal . Up to his death 44 booklets had appeared, a 45th edition was published posthumously in 1732 after a review of his handwritten estate . The Gundlingiana developed shortly after scientific journals had established themselves as a form of scientific publishing and is compared to modern blogs , as the scholar continuously presented his personal perspective on knowledge and sciences to the public. The subject areas dealt with included law, history, literature and linguistics as well as theological subjects. Gundling also published literary reviews and his personal correspondence in the magazine.