View from the church tower in Randau over the village 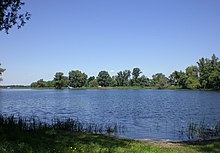 Randau-Calenberge is a district in the southeast of the state capital of Saxony-Anhalt , Magdeburg . With 13.7176 km² it is one of the largest districts in terms of area, but with around 537 inhabitants (as of December 31, 2016) it is only sparsely populated.

As the name suggests, the district consists of two places. Randau with a built-up area of ​​0.4 km² is located in the center of the district, Calenberge with only 0.2 km² construction zone is one kilometer east as the crow flies, but the distance on the road is three kilometers. In the west the district is bounded by the Elbe, in the south and east the Salzlandkreis joins it. Kreuzhorst and Pechau are the neighboring districts in the northeast. In addition to the Elbe , an old Elbarm and the Elbe flood canal form largely natural borders. Another old Elbarm crosses the district from north to south and also separates the two districts from each other. In the area there are other small lakes and ponds such as the Randauer Baggerloch , Der Schwarze Krüger , the Jägerkolke , Rüsternpfuhl , Fuchsbusch , Sonnensee , Steinför , the Gieselerpfuhl , the Pfingstwiesenkolke , the Gehrenkolke , the Calenberger See and the Höllenkolke . The Franzosengraben , which is used for drainage, runs west of Randau .

Both districts are purely residential areas, are about 12 kilometers from Magdeburg city center and are connected to the city's local transport network via a bus line. About 90% of the district area consists of meadows and arable land, which are mainly cultivated by an Agrar GmbH based in Randau.

Archaeological finds have shown that the Randau area was settled by Slavs around 600 AD . Settlement is presumed as early as the Middle Stone Age (4000-5000 BC).

In a comparison between the Magdeburg monastery of Our Dear Women and an Iwan von Dornburg, dated May 28, 1236, Thegenardus de Randowe is listed as a witness . This date is considered the first documentary mention of the place and also of the Knights of Randau . The castle that existed at that time was conquered and destroyed by the citizens of Magdeburg at the time of Archbishop Burkhard II (1295–1305). There is a vivid legend about it.

As a manor , the place was given to Archbishop Burkhard III in 1309 in the form of a gift from the city of Magdeburg . left. He immediately sold the goods on. The von Alvensleben family is proven to be the owner from 1391 to the middle of the 19th century. Around 1609, Randau Castle was built in place of the old castle , but it was destroyed again along with the entire town in 1631 during the conquest of Magdeburg by Tilly . In the middle of the 18th century, the von Alvensleben had another baroque manor house built, and the manor was supplemented by other buildings in the period that followed. Administratively, Randau belonged to the wood district of the Duchy of Magdeburg until 1815.

Randau only came to the district of Jerichow I with the Prussian administrative reform of 1815 . With the decline of the von Alvensleben family, the estate fell into disrepair in the first half of the 19th century. In 1863 the Magdeburg entrepreneur Paul Hennige acquired the estate and built the manor house that still exists today in a classicist style. On October 17, 1928, the Randau manor district was united with the rural community of Randau.

In 1910 there were 300 people living in Randau. The main line of business was agriculture. It was forcibly collectivized in 1958 and continued in two agricultural production cooperatives and a pig and cattle breeding facility .

In a by Pope Innocent III. Calenberge is officially mentioned for the first time in a document issued in 1209 on the possession of the Magdeburg Berge monastery . With the formation of the Saxon districts, Calenberge came to the Gommern district in the Belzig district in 1533 . As an ally of Napoleon , the Saxon King Friedrich August left the office of Gommern to the French in 1808, so that Calenberge also belonged to the French-ruled Kingdom of Westphalia until 1813 . With the conquest by Prussia , Calenberge came to the district of Jerichow I. In 1882 the old church was torn down and a new church in the neo-Romanesque style was built in its place . Despite the construction of a paved road to Magdeburg in 1884, the development of the place, which in 1910 only had 155 inhabitants, stagnated.

The communities Calenberge and Randau originally belonged to the district of Jerichow I and since 1950 to the district of Schönebeck . On June 20, 1957, they were merged to form the municipality of Randau-Kalenberge (actually recorded with a "K"). The united community had 581 inhabitants in 1964. On July 1, 1994 it was incorporated into Magdeburg.

The cultural monuments in Randau-Calenberge are listed in the local register of monuments.