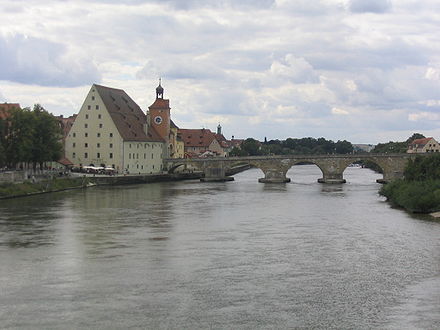 Salzstadel (left) at the Stone Bridge in Regensburg

Salzstadel is in Southern Germany , Austria , the Switzerland and earlier in Bohemia common name for a municipal or stately building for temporary storage in the trading of rock salt , the gold of the Middle Ages , from that time to preserve food and salt herring needed salt can be obtained .

The establishment of the salt barn is related to the Central European salt trade , which experienced a great boom in the late Middle Ages and early modern times ; therefore most of the surviving warehouse buildings for the Hall (the old German name) date from this period. Due to the great value that salt possessed at that time, the trade in the "white gold" was subject to strict regulations. The prerequisite for the sale was the award of the so-called salt shelf by the emperor , which was commonly given to individual towns or noble lords. The buildings intended for central storage and sale were in a convenient location, for example near navigable rivers or main roads through which the salt mined in the Alpine region was delivered. The salt stalls (also in smaller places) along the former salt roads are particularly common . Corresponding buildings were also built in northern Germany, for example the salt storage facility in Lübeck .

The inner-city salt stalls were usually generously dimensioned, multi-storey buildings with a high pitched roof . Since these were purely functional buildings, they had - apart from the occasional barbed or stepped gables - hardly any architectural or other decoration. The massive stone construction, which is often found, with sometimes extremely powerful walls, which only had small, often loopholes-like windows, prevented moisture from penetrating and protected against break-ins. In the country, less often in the cities, salt stores partially or entirely in half-timbered construction were also widespread.

After the end of the monopoly and the liberalization of the salt trade, the existing barns were demolished, used as storage facilities for other goods or converted for other uses, such as residential buildings or barracks . Today many buildings are used for cultural purposes, as museums, exhibition and event rooms or libraries.

List of former salt stalls with the time of construction