This article deals with the bones of the head. For additional meanings, see Skull (disambiguation) .

Cranium of a recent person. The frontal bone, sphenoid bone, parietal bone, temporal bone and occiput are separated from each other by clearly recognizable cranial sutures .

The bones of the vertebrate head are called the skull . The corresponding foreign word but the lower jaw does not involve with, is Cranium or cranium ( medieval Latin cranium , Pl. Crania from Greek κρανίον Kranion ). The area of ​​the skeleton following the skull is correspondingly referred to as the postcranial skeleton (or postcranium ); intracranial means "located in the skull". (Spelling also possible with c .)

The skull is a common feature of all vertebrates. There are similar developments in the arthropods , z. B. in insects and crabs , in which the upper pharyngeal ganglion is protected by the exoskeleton . The parallel development in cephalopods (squid) is even more similar . These molluscs have a cartilage capsule that protects the brain and is functionally comparable to the brain skull. In the evolution of vertebrates, the earliest forms of the skull developed in the ancestors of the bony fish (see fish skull ). The hardest bone in the mammalian skull is the petrous bone . Head formation and skull formation are a result of cephalization .

Human skull in side view 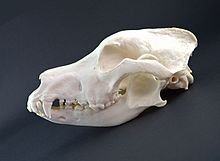 Skull of a dog

Skull of a cat

Skull of a snapping turtle

Skull of a duck

The skull of the man consists of 22 to 30 together via sutures associated bone . The different information is based on the fact that, on the one hand, the frontal bone is formed from two bones, but usually appears as a single bone after growth has finished, on the other hand, the hyoid bone and the auditory ossicles are only occasionally included in the skull bones. Anatomically, one distinguishes the

Morphologically , the cranial skull is divided into the roof of the skull (calvaria, skullcap ) and the skull base , which surround the cranial cavity . The brain skull is formed by

Some authors assign the whole frontal bone to the brain skull.

The skull is connected to the cervical spine through the head joints .

The bones of the facial skull

The facial skull includes u. a. those bones that make up the eye and nasal cavities and the oral cavity . In detail these are: 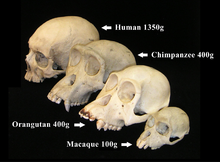 Primate crania in comparison (the weights refer to the brain mass)

The skull differences between humans and apes are mainly due to the fact that humans are fully erect and walk . In humans, the lies foramen magnum of the skull base under the gravity of the head, so this in an upright posture by balancing on the spine can be worn. The human neck muscles are therefore not as strong as those of the great apes and the cranial bones are correspondingly thinner-walled. The points of attachment for large muscles such as B. the crest . The volume of the human cranium is larger than that of the great apes to accommodate the larger brain. The human facial skull, on the other hand, is smaller, the jaw area has receded and there is no ape gap in the teeth .

In the newborn, the parts of the brain skull are not yet completely ossified and have not grown together. There are bone gaps, the fontanelles, between the individual skull plates . In the course of the first years of life, the fontanelles and the skull close completely ossified. The individual plate bones of the brain skull can still be identified at the cranial sutures ( sutures ) in the skull of an adult , with the suture between the two forehead bone parts usually closing by the age of two. If one or more cranial sutures close prematurely, one speaks of craniosynostosis (craniosynostosis). In the newborn, the ratio of brain skull to facial skull is still 8: 1, in a five-year-old child 4: 1, in an adult 2: 1.

Skull kinesis or kinetics means the mobility of certain skull regions relative to one another. Such mobility can be found in

In birds and some reptiles, for example, there is an additional joint in the roof of the skull in front of the eye sockets, which allows them to move the roof of the mouth back and forth against the skull by turning the square to the side . The increased lifting of the upper jaw achieved in this way increases the mouth opening ( beak ) and possibly also the biting force .

The kinesis of the skull leads to a large variety of shapes in birds and is not only responsible for their skill in manipulating the food, but also reduces the impact when pecking in some birds and also plays a role in nest building and plumage care. It is also of systematic importance, because four or more taxa of recent birds are distinguished on the basis of the relationships of the roof bones that are involved in this movement process .

In mammals, on the other hand, the individual regions of the skull (except for the lower jaw) are mutually rigid - their skull is akinetic. (The minor movements of the bones in sutures, which are important for " craniosacral therapy ", do not fall under kinesis.) 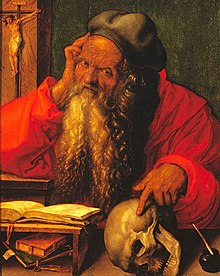 Since the hard parts of living things (housings, skeletons , teeth ) are often not or only partially broken down, they provide most of the fossils .

In terms of symbolism, however, the skull indicates the transience of life: it is the iconographic mark of many holy penitents and hermits , and is part of the standard program in pictures of the " Church Father " Jerome . With the devastating appearance of the plague , the dance of death pictures have been created since the 15th century , which are provided with entire skeletons, individual bones and skulls. The skull is often part of baroque vanitas - still life . Here, too, it is the object of meditation , which is intended to remind the viewer of the transience of earthly life.

A skull is often found at the feet of Jesus in crucifixion scenes . This alludes to a medieval legend according to which the cross of Christ was erected on Adam's tomb .

Wizards , witches, and occultists are often associated with skulls. As in art, it should clarify the mortality of the people around them and their own mortality.

In Gothic culture , skulls are used as jewelry .