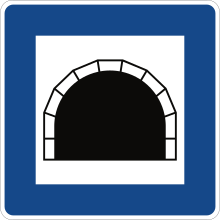 A road tunnel is a tunnel in the course of a road .

With a length of 24.5 kilometers, the Lærdals Tunnel in Norway, which opened in 2000, is the world's longest road tunnel. The road spiral tunnel with the highest turning angle, namely 2070 ° (5.75 turns) is the spiral tunnel Drammen , also in Norway.

The Etruscans built as early as the 6th century BC. First road tunnel in the Alban Hills . The Romans also built road tunnels up to 1000 meters long at the turn of the century.

The first transalpine road tunnel was the Col-de-Tende road tunnel , which was one of the longest road tunnels in the world when it opened in 1882.

While many long vertex and spiral tunnels were built in railway construction as early as the 19th century , especially in transalpine traffic, the construction of road tunnels only began on a larger scale in the course of the construction of motorways after the Second World War . This has to do with the greater gradients that road vehicles can overcome in comparison with adhesive sheets, with the tighter curve radii they can negotiate and with the higher safety requirements in road tunnel construction.

The construction of road tunnels is always more complex than that of rail tunnels, since a two-lane road tunnel already requires a larger cross-section than a double-track rail tunnel.

Road tunnels from a length of 300 to 500 meters require special ventilation systems in order to avoid excessively high concentrations of toxic exhaust gases in the tunnel (operational ventilation) and, in particular, in order to maintain favorable conditions for self-rescue for as long as possible in the event of a fire (fire ventilation).

Since the risk of accidents is much higher in road traffic than in rail traffic, great attention must be paid to tunnel safety in road tunnels. For longer tunnels u. There may be emergency bays and separate rescue tunnels or shafts or, in the case of two-tube tunnels, emergency exits to the neighboring tubes.

Loudspeaker announcements enable road users to be addressed effectively in the event of danger and, if necessary, an effective evacuation request. After the German Federal Highway Research Institute (BAST) researched the loudspeaker concept of synchronized longitudinal sound reinforcement (SLASS) for achieving satisfactory speech intelligibility in tunnels in 2009 and recommended it since then, the installation of such loudspeaker systems has been given increasing importance because of the high level of safety.

Radio reception, which can be used to transmit even more differentiated information to the drivers, also contributes to safety.

Signage and guidance systems in the tunnel

In the area of ​​road tunnels, both static and dynamic signage ( variable message signs ) are used. In addition to traffic signs, there are also signs that show the way to the emergency exit or the emergency call station . For safety reasons, this signage must meet special requirements. A corresponding guideline has therefore been drawn up at European level, which aims to standardize the signage of road tunnels in the member states and to ensure a certain minimum standard. In addition to the actual tunnel route, the advance warning area and the end of the tunnel must also be signposted. However, these two areas are not dealt with in more detail in the EU directives.

The guideline stipulates that the symbols used in the respective member states must comply with the requirements of the Vienna Convention . Exceptions are states that do not apply the convention. For reasons of general understanding, meaningful symbols should be used instead of inscriptions in the national language. The guideline also calls for the signs to be clearly recognizable even in poor visibility conditions, which usually requires self-illuminating signs.

The member states have subsequently developed their own guidelines , which are basically based on the requirements of the EU and clarify them. In some cases, additional regulations have also been introduced. For example, the signage of the early warning area or the guidance systems are specified more precisely in the guidelines of the respective member states. 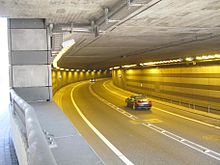 In addition to the signage, special importance is attached to the guidance systems in the tunnel. All marking signs are designed in such a way that they can be recognized even in poor visibility. The EU directive specifically requires a border line to identify the roadside. In addition, in tunnels that are operated in the opposite direction, the lanes are clearly separated by means of a single or double line. Some member states provide additional marker buttons between the double line . In addition, self-luminous marking elements are attached to the side at regular intervals (for example 25 meters).

A motorway tunnel is a tunnel through which a motorway runs. Today, a separate tunnel tube is generally provided for each directional lane. There are also motorway tunnels with more than two tubes such as the New Elbe Tunnel in Hamburg .

Often there is another tube that allows quick evacuation in the event of danger.

Motorway tunnels are particularly found on motorways in the mountains , in order to realize larger curve radii and lower gradients than would be possible with a tunnel-free route. In metropolitan areas, motorway tunnels also serve to protect against noise . These are often produced in an open design . This means that the tunnel is usually built with a rectangular cross-section in an excavation and after the production is backfilled with earth materials. Other types of motorway tunnel design are underwater tunnels (e.g. the Hamburg Elbe tunnel).

During the Second World War, some road tunnels in Germany were used as bomb-proof factories , such as the two Eschenlohe tunnels . The motorway tunnel under the Gran Sasso ( Italy ) also serves as an access to a laboratory for the detection of neutrinos . 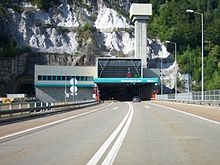 Entrance to the Karawanken tunnel on the Austrian side 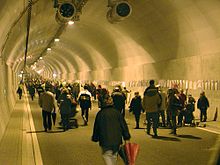 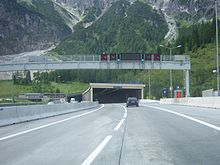 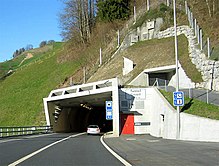 Giswil Tunnel (top right is the exit of the safety tunnel )