The University Medical Center Schleswig-Holstein emerged from the merger of the University Hospitals Kiel and Lübeck in 2003. The administrative seat of the institution under public law is in Lübeck.

The UKSH is funded by the Christian Albrechts University of Kiel and the University of Lübeck . The students of the medical faculties and the dental faculty (only in Kiel) are trained at the UKSH. At both locations there are training opportunities for medical professions such as B. Nursing and Health Care and MTAs .

The medical faculty in Kiel was one of the founding faculties of the University of Kiel in 1665. Medical facilities have existed on the Lübeck campus since 1912. University medicine in Schleswig-Holstein is associated with researchers such as Friedrich von Esmarch , Hans Gerhard Creutzfeldt and Friedrich Wegener .

Structural renovation of the UKSH

The Schleswig-Holstein state government decided in July 2009 to make extensive investments in modernizing the structural infrastructure on the Kiel and Lübeck campuses. In 2012, the Schleswig-Holstein State Parliament cleared the way for a Europe-wide tender. Specifically, it is about the construction investment and operation for 30 years as well as an innovative financing model. The volume is 1.7 billion euros. The characteristics of the process: The private partner is assigned the planning, construction and operation of the property, the state of Schleswig-Holstein remains the owner.

On September 30, 2014, the University Hospital Schleswig-Holstein and the bidding consortium in Kiel signed the contract for the construction master plan. The BAM / VAMED consortium was awarded the contract . One year after the contract was signed, on September 30, 2015, the foundation stone was laid for the extension of the existing central clinic on the Lübeck campus. In March 2016, the foundation stone was laid for the new hospital of the future on the Kiel campus. The topping-out ceremony was celebrated in Kiel at the end of April 2017. The first patients could be treated in the new building at the beginning of 2019. The topping-out ceremony in Lübeck was planned for September 2017 - the first patients could be treated here at the end of 2019. Interdisciplinary buildings with improved infrastructure were built at both locations.

The aim is to work more efficiently in both central clinics. The state of Schleswig-Holstein participates in the repayment of the old debts. In the course of the new buildings, 450 jobs will be cut and the company collective agreement will be replaced by the collective agreement for the public service of the states . As the new building was delayed, investments in fire protection for old buildings had to be made at the Kiel location, although the plan was to demolish them.

The UKSH operates a helicopter landing pad with a foam extinguishing system at both locations (Kiel and Lübeck) . The helicopters Christoph 12 and Christoph 42 fly to the clinic regularly.

Main entrance of the University Hospital in Lübeck 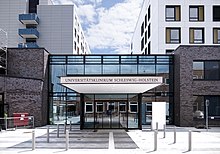 Main entrance to the University Hospital in Kiel

University medicine in Schleswig-Holstein is associated with researchers like

Some of the Nobel Prize winners are among the graduates from Christian-Albrechts-Universität zu Kiel :

The Center for Integrative Psychiatry (ZIP gGmbH ) is a treatment center in which people with mental illness are examined and treated. People affected by mental illness are holistically diagnosed and treated under psychiatric , psychosomatic and psychological aspects. Outpatient clinics, day clinics and fully inpatient clinics work together integratively with resident neurologists and other clinics. The ZIP is a subsidiary of the Schleswig-Holstein University Medical Center.

Patient data is stored in a secure data center . The complex data (“ big data ”) are analyzed in pilot projects to enable therapies.

Service Stern Nord GmbH employs 1,600 people. a. work in building cleaning , laundry or as a porter . The partial privatization was in 2014 reversed.

The UKSH has been cooperating with the Damp Group in laboratory diagnostics since January 1, 2011 . The commercial responsibility lies with the Damp Group. The UKSH remains the majority shareholder. The aim of the cooperation between the laboratories is to increase economic efficiency and to evaluate large data sets for the elucidation of common diseases .

The UKSH Academy is a gGmbH with around 800 apprenticeship places and around 3000 further and advanced training participants per year. It provides training in the professions of health and medical care , health and pediatric care (both campuses), midwives or obstetric nurse (Campus Kiel), dieticians (Campus Kiel) and MTA Radiology (Campus Kiel). The UKSH Academy also participates in the training for surgical technicians (OTA) and coordinates the training for medical assistants (MFA) for the UKSH .

In addition to the training, the nursing professions have the option of completing a dual study course “Bachelor of Arts in Nursing”.

The ver.di union criticized the lack of co-determination of the workforce and the immoral wages of the trainees.

Special features of the UKSH

UKSH International (International Department) processes inquiries from abroad that must first be translated and processes cost estimates in cases where there is no health insurance.

The Medical Faculty of the Christian-Albrechts-Universität zu Kiel and the Medicine Section of the University of Lübeck are responsible for research and teaching in university medicine in Schleswig-Holstein . For this purpose, the UKSH provides the requirements for research and teaching in accordance with the University Act with its facilities at both locations in cooperation with the universities. Through the interplay of interdisciplinary research and patient care, current research results are quickly transferred to diagnostic and therapeutic procedures.

The research priorities of the Universities of Kiel and Lübeck at the UKSH include the fields of “ Infection and Inflammation ”, “ Brain , Hormones , Behavior ”, “Genetic Medicine” and “Aging-Dependent Mechanisms of Disease Manifestation”, “ Oncology ” and “Clinical Genome Research ”,“ Neuroscience ”,“ Endocrine Control and Regulation ”and“ Biomedical Technologies ”. The “Inflammation at Interfaces” cluster, made up of scientists and doctors from both universities, is funded by the excellence initiative of the federal and state governments. Other members are scientists of both medical schools in four collaborative research centers in charge with and are involved in three more. In addition to two graduate schools , three national and one international graduate college were set up in Kiel and Lübeck . Researchers from both locations are involved in three of the four new German centers for health research: German Center for Cardiovascular Research (DZHK), German Center for Lung Research (DZL) and German Center for Infection Research (DZIF).

In addition to the two classic courses of study, there are also master’s courses associated with medicine, such as Medical Life Science, Master of Hospital Management, Medical Engineering, Medical Informatics and Psychology . Cooperations exist with 36 academic teaching hospitals and teaching practices.

In nursing research, the UKSH concentrates on the priorities of chronically and multiply ill people, on the connection of the inpatient sector with outpatient and rehabilitative care as well as the expansion of the clinical tasks of nurses.

The University Medical Center Schleswig-Holstein (UKSH) is one of the largest university hospitals in Germany and largest employer in Schleswig-Holstein. 2000 doctors and scientists and 5500 nursing staff and employees of the medical-technical functional personnel work at the UKSH. The UKSH Kiel has a total of around 1200 beds, while the UKSH Lübeck has a total of around 1100 beds. The usable building area for both locations together amounts to around 665,000 m 2 . The balance sheet total in 2018 was around 1.7 billion euros. The Case Mix Index for 2018 was 1.460. If you add up the case mix points for the two locations in Kiel and Lübeck, the UKSH ranks second in Germany in the VUD benchmark.

The UKSH is the only maximum care hospital in Schleswig-Holstein and guarantees comprehensive university medical care at over 86 clinics, sections, centers and institutes together with the medical faculty of the Christian-Albrechts-Universität zu Kiel and the medicine section of the University of Lübeck and research in the state of Schleswig-Holstein. 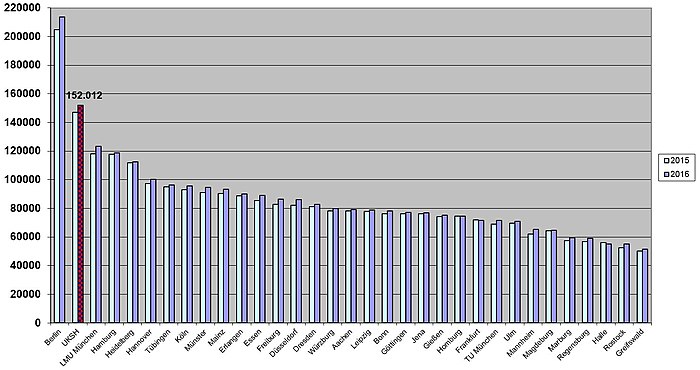 In an ARD Monitor broadcast , the suspicion was expressed that, for economic reasons, livers from organ donors were transplanted to patients from Saudi Arabia for large sums of money, and that organ transplants in Kiel put cash patients at a disadvantage compared to private patients . The accusations against the Kiel doctor have been revoked. The public prosecutor's office was investigating a former employee of the International Department because of a private-professional conflict of interest .

Acinetobacter baumannii, resistant to four antibiotic groups (4- MRGN ), manifested itself in the Kiel clinic at the turn of the year 2014/2015 . The German Foundation for Patient Protection then demanded initial examinations of the patients based on the Dutch model. Clinic director Scholz was accused of playing down the outbreak and the deaths associated with it. Unionists and former doctors drew attention to a shortage of nurses and cleaning staff. The German Society for Hygiene and Microbiology stated in a statement that such outbreaks are possible even with optimal hygiene. A rational use of antibiotics and consistent outbreak management are therefore fundamentally important in order to minimize the overall risk of infection for patients.

In February 2019, photographed e-mails that became public caused a sensation in which an external consultant from North Rhine-Westphalia was leaked detailed work processes from a springer who was supposed to uncover alleged deficiencies in the work organization. The employees felt they were being spied on . The staff council complained that the matter had been swept under the table by the internal auditing and legal services of the UKSH.

Despite the tense economic situation, administrative employees were paid far above the collective bargaining agreement. However, after criticism from the state audit office , these were not reduced, but sorted into the highest tariff class, rewarded with allowances and ultimately earned even more. The state parliament FDP accused the supervisory board of not having fulfilled its control function.