The LMU Klinikum (until 2020 the University of Munich Hospital ) is one of the largest university hospitals in Germany and Europe. Since October 1, 1999, the clinic has been an organizationally, financially and administratively independent part of the Ludwig Maximilians University .

The Hospital of the University of Munich with its two campuses in the city center and Grosshadern is after the Berlin Charité , the second largest hospital of maximum care in Germany.

The LMU Klinikum has been a public law institution since June 2006 , which gives the Executive Board more room for maneuver in economic decisions. At the same time, it is connected to the university as a research and teaching facility.

With the merger of the two university clinics "Innenstadtkliniken" and " Klinikum Großhadern " in 1999, medical patient care was restructured and administration was combined.

With the merger, a new management body was established that reflects the four pillars of university hospital management: the medical director for medical and medical matters, the commercial director for administrative tasks, the nursing director for the nursing staff and the medical support and the representatives of the medical faculty in the person of the Dean for Research and Teaching. The supervisory body is the supervisory board , consisting of members of the Bavarian State Ministries involved and the President of the Ludwig Maximilians University (LMU) as well as a representative from another university and a non-specialist representative from business.

These areas near the old town will continue to provide a high-quality offer for outpatient and other initial care through the new construction of a portal clinic in a central location. Immediately next to the existing building of the medical clinic in Ziemssenstrasse, the new portal clinic is to be built in 2016/17, which will house 200 interdisciplinary beds, several outpatient departments, an emergency room and a birth center.

After completion and reorganization, the relocation of numerous areas such as B. paediatrics, oral and maxillofacial surgery and gynecology as well as large parts of the departments for surgery and internal medicine according to Großhadern.

In 1991 the clinics in the center of Munich merged to form the Klinikum Innenstadt. These include the medical clinic and polyclinic, the Dr. von Haunersche Children's Hospital , the women's clinic on Maistraße , the surgical clinic, the dental, oral, maxillofacial and facial surgery clinics, the psychiatric clinic, the eye clinic and finally the dermatological clinic. There are also a number of university institutes on the site, such as the Institute of Physiology with several large lecture halls or the Anatomical Institute, which together with the clinics form the inner city campus. The last building for child and adolescent psychiatry with three wards was completed in 2010.

In addition to the predominantly outpatient and inpatient health care, the inner city campus will also play an important role in clinical and student training in the future.

The Großhadern ( Lage ) Clinic , located in the Hadern ( Großhadern ) district of Munich, is part of the Ludwig Maximilians University Clinic . Since the merger with the inner city clinics, its exact name has been Klinikum der Universität München - Großhadern Campus . With its 1210 beds (as of December 31, 2013) and the affiliated institutes, it is the largest contiguous hospital complex in Munich. In 1994 the new building of the gene center , which also belongs to the Ludwig Maximilians University in Munich, was put into operation, in 1999 the entire faculties for chemistry and pharmacy were relocated to the HighTech CampusLMU in Hadern. In addition, the Biozentrum Martinsried is in the immediate vicinity , which combines a large part of the departments of the Faculty of Biology at the LMU, as well as the BMC Martinsried (Biomedical Center Martinsried), another research and teaching location of the LMU. 48.111388888889 11.469444444444

The clinic's transplant department is one of the leading in Germany. All clinically established transplants are carried out, i.e. transfers of heart, lung (one or two wings), pancreas, kidney and liver as well as combined pancreas-kidney and heart-lung transplants. Further medical focuses are oncology , neurology and neurosciences, cardiovascular and metabolic diseases. The interdisciplinary center for palliative medicine is the point of contact for seriously ill people. The operational center on the Großhadern campus was reopened in July 2014 with 32 operating theaters, an interdisciplinary emergency room, 5 intensive care units and a central sterile supply department as well as the outpatient operating theater with a further 4 operating theaters. A children's palliative center and the center for stroke and dementia research are also affiliated . The Ronald McDonald House in Munich of McDonald’s Children 's Aid has existed near the campus since 1997, where families whose children are being treated at the hospital can be accommodated.

In addition to health care, the clinic also plays an important role in clinical and theoretical research as well as in student training. A nursing school is attached to the clinic.

An emergency medical vehicle and the intensive care transport helicopter “ Christoph München ” are stationed at the Großhadern Clinic .

In 1954 there was an ideas competition for the construction of a new large hospital on the south-western outskirts of the city, in which the choice fell on a 70-hectare property in Großhadern . By being located on the outskirts of the city, the aim was on the one hand to bring the patients the advantages of the quiet location and better air conditions and, on the other hand, to keep future expansions open without problems. The specific planning of the clinic began in 1966. The construction period was from 1967 to 1977. The costs amounted to 367 million euros. However, the outbuildings were already occupied in 1973. The appearance of the facility is mainly characterized by the 60 meter high and 205 meter long reinforced concrete ward block. It is visible from afar because of its shape and aluminum facade and is nicknamed "the toaster" by students. This main building will soon be demolished and will be replaced by a new building. The costs for this are estimated at at least 500 million euros.

With the topping-out ceremony for an interdisciplinary portal clinic on the city center campus, the University of Munich Hospital is celebrating the construction progress on Ziemssenstrasse / Nussbaumstrasse on May 15, 2017. The groundbreaking ceremony took place in October 2015 and the construction is expected to be completed in 2020. The new interdisciplinary clinic is now also structurally and structurally taking medical advances into account. It is intended to provide patient care and, as a result, university medical training on the city center medical campus.

The centrally located Poliklinikum in Pettenkoferstraße and other clinics near the old town area can also be reached on foot from the Altstadtring and the main train station as well as via the underground lines 1, 2, 3 and 6 and by bus.

The last built Klinikum Großhadern is on the outskirts of Munich. The subway line 6 has had its terminus there since 1993 . Several city and regional buses also drive to the stations around the clinic. An extension of the tram from the Waldfriedhof through Würmtalstraße to the Großhadern Clinic, which was planned in the 1970s, was abandoned in favor of the subway that was realized later.

Flowers on the way

Swarm of herons by Rolf Nida-Rümelin

The following sculptures can be found on the grounds of the clinic:

The clinic can look back on 200 years of history, which is closely connected to the development of the medical faculty. Medicine was one of the four founding faculties of the high school in Ingolstadt in 1472. In 1800 the university was relocated to Landshut and was named "Ludovico-Maximilianaea". In 1825 the company finally moved to Munich . In 1999, the two campuses in the city ​​center and Großhadern merged to form the University of Munich Hospital. 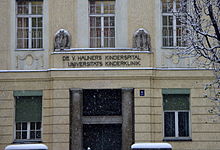 Hospital chapel of the LMU eye clinic in Mathildenstrasse

After the university was relocated, the medical faculty received the anatomy building built by Leo von Klenze for the Academy of Sciences for instruction in non-clinical subjects. The right to use the clinical subjects was agreed in the General Hospital, which was newly built in 1813 with the assistance of the doctor Franz Xaver Häberl . Today this is the Medical Clinic on Ziemssenstrasse (named after Hugo von Ziemssen ), in Munich also known as the Klinikum left der Isar . From a technical point of view, Häberl also proved his genius here. Already in the previous building, the Hospital of St. John of God (1752-1794), he had one he developed ventilation system installed for ventilation of the wards, which became a technical attraction and 1806 even Napoleon was visited. Another important contribution to hygiene in the new building of the General Hospital from 1813, also developed by Häberl, was the water-flushed toilets and the construction of special body chairs with hermetically sealed buckets for the sickrooms. An artesian well was drilled in 1839 to ensure a continuous supply of clean water. The conveyor system designed by Häberl pumped the water into two basins under the roof, from which the in-house pipeline network was fed. Between 1863 and 1929, buildings for the polyclinic (1883 Reisingerianum ), which Dr. von Haunersche Children's Hospital (1882 based on a design by Arnold von Zenetti ), the Surgical Clinic (1891 under the direction of Arnold von Zenetti), the Dental Institute (1899/1900), the Psychiatric Clinic (1904 by Max Littmann ), the Eye Clinic (1910 according to plans by Ludwig von Stempel ), the first women's clinic in Maistraße (1916, architect Theodor Kollmann ), supplemented by the second women's clinic in Lindwurmstraße (1926) and finally the dermatological clinic (1929). In terms of architectural and social history, the clinic district with its pavilion style represents the idea that each specialist area should have its own building. For the non-clinical subjects such as pathology (1874) and pharmacology (1893) there are also buildings as well as one for the hygiene institute specially designed by Max von Pettenkofer (1879) and an extension to the general hospital for the 'medical-clinical institute' (1878). In this area, too, the differentiation of the disciplines is evident in architectural diversity. The clinic district is complemented by the complex of the medical reading room and the Institute for the History of Medicine. The villa was built by Emanuel von Seidl in 1910 for the art dealer Franz Josef Brakl and acquired by the university in 1919.

After the Second World War, with the reconstruction of the clinics and institutes, a tendency to amalgamation of small or related areas emerged, which finally led to the merger in 1991 to form the Klinikum Innenstadt. But the clinic still took up an entire city quarter, which made interdisciplinary patient care difficult for both doctors and patients due to long distances.

The costs of repairing the severe war damage and the considerations for restructuring the medical and administrative processes led to a completely new concept: the spatial consolidation of all clinics under one roof. The first prize in 1954 went to the design by the architects Godehard Schwethelm , Walter Schlempp and Werner Eichberg . The Bavarian Council of Ministers followed the recommendations of the panel of judges. The choice of location fell on a 70 hectare site in Großhadern, which also left space for future expansion. An important aspect in the planning was that a university hospital with its high-performance medicine needed adequate staff in nursing, surgical assistants, physiotherapy and laboratories . In addition, there were the diagnostic facilities for which well-trained MTAs and MTRs are required. For this reason, rooms for state vocational schools were provided in the areas mentioned from the start . The heads of these vocational schools are directors of the clinics and thus professors at the medical faculty. Particularly in the area of ​​nursing, there is an extensive training program on the part of the nursing management.

Between the first patient admission in September 1971 and 1981, the 15 clinics and 4 institutes gradually moved into the house.

Well-known doctors of the clinic

The following doctors worked at the clinic:

The entire spectrum of medical care is covered in 48 clinics, departments and institutes: 1964 beds are available in around 60 wards on both campuses. A total of 10,400 people work in health care, research and teaching, of which approx. 1,800 work as doctors, 3,200 in the nursing area and 5,300 in the medical-technical area as MTA , MTRA , laboratory assistants etc. or in the workshops and administration. Around 530,000 outpatients and inpatients are treated annually .