The word “ål” was transferred from its meaning “ eel ” to the deepest “ fairway ”. Vesterålen is derived from an old name for the strait west of the island of Hinnøya and can be translated as Western Sound in German . The term Vesterålen is in Norwegian in the singular , the suffix "s" represents a Scandinavian language area particular item is.

The earliest detectable settlements in Vesterålen are around 6000 years old and come from hunters and gatherers who lived primarily from fishing and hunting. From the Viking Age onwards , the stockfish trade with mountains moved many people to settle in the area. At that time trading was only allowed to the trading houses in Bergen and Trondheim . However, these regulations were partially relaxed for Vesterålen, beginning with the permission to operate inns in 1770. From 1860 large schools of herring attracted many workers from other parts of the country and the region experienced an economic boom. In 1881 the shipping company Vesteraalske Dampskibsselskap was founded in Stokmarknes , which from 1883 provided weekly connections between Trondheim and Hammerfest . The shipping line to Bergen and Kirkenes was later extended and has been under the name Hurtigruten every day since then .

Administratively, the region is divided and belongs to the Fylken (administrative districts) Nordland and Troms og Finnmark . At the end of 2005 the total population of the six municipalities of Vesterålen was 33,500. The total area of ​​the islands is around 3,100 km², with a north-south extension of 150 km.

The region offers a very varied landscape: rugged mountain formations rise directly from the sea, while lonely, white sandy beaches evoke associations with southern countries. There are fjords , skerries , rivers and lakes, moors , lonely mountain valleys and small plateaus. The highest mountain in the region is Møysalen on the island of Hinnøya at 1,262 m .

Also geologically Vesterålen is not uninteresting. In many parts of the underground , which is part of the primary rock of the earth, is over 600 million years old. One of the oldest rocks in the world was found in Bø , formed 2,700 million years ago by volcanic activity. On Andøya , however, there is a belt made from the youngest rock on the Norwegian mainland, at 100 million years old. The soil is rich in plant and animal fossils , and there is also the only known coal deposit on mainland Norway. 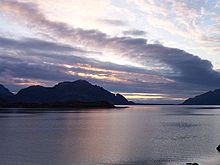 Although Vesterålen is at the same altitude as Greenland and north of Iceland , the climate is very mild due to the Gulf Stream . Characteristic are the relatively mild winters and the not too hot summers. In the coldest month of February, the average temperature is −2 ° C, while in July it is 12–14 ° C. The highest temperature measured so far was 31 ° C.

Autumn is usually very rainy, with most rainfall falling in October. The wettest month is again July. Plenty of snow falls from January to March.

Since Vesterålen is north of the Arctic Circle, you can experience the polar night in December and early January , when the sun does not rise at all. From 23 May to 23 July, the midnight sun shines around the clock .

Due to the generally mild climate in Vesterålen you can find typical Arctic plants and plants that are native to further south close together. In a very small area you can find both mountain plants and beach flowers. In the forests there are mainly spruce , birch , mountain ash , alder , bird cherry and various types of willow . However, only natural spruce trees can be found on Hinnøya, all others have been planted. The tree line fluctuates very strongly depending on the location. On the sea side it is already about 200 m, while in Sortlandsundet 300 and in the north of Hinnøya 400 meters have to go up to reach the tree line.

Vesterålen is also known for its abundance of bird species, as the fjord areas offer plenty of food for the sea birds. Particular representatives of the bird world are sea ​​eagles , puffins , razorbills , guillemots , shags , herons and swans . Rare species are the northern fulmar and northern gannet , which can only be found on the seaside, and the godwit , which only breeds on Andøya in Norway. The most famous bird cliffs are in Bø and Andøya.

Vesterålen is surrounded by waters rich in fish. Almost all fish species native to the Norwegian coast are common here. Particularly interesting for fishermen are: cod , haddock , coalfish , redfish , sea ​​wolf , salmon , herring , tusk , lingfish , plaice , halibut , squid and crab . In the summer months you can also watch whales and dolphins off the coast .

The southern areas of Vesterålen belong to the Fylke (administrative district) Nordland , the northern areas to Troms and Finnmark . There are a total of six municipalities on the islands: Andøy , Bø (Nordland) , Hadsel , Lødingen , Sortland and Øksnes . Lødingen was not originally one of them, but has recently been described as being in Vesterålen and is also listed in the region's official tourist guide.

Fishing boats in Stø, on the northern edge of Langøya

Aside from tourism, fishing is the region's most important industry, sometimes combined with agriculture. Vesterålen benefits from a short distance to the fishing grounds. Almost all fish species native to the Norwegian coast are common here. Cod and herring are the most important for the regional economy . In recent years, the famous Lofoten fishing has shifted more and more to Vesterålen. Fishermen come from all corners of the country from January to April to take part in the cod catch. Herring is mainly caught in autumn.

In addition to fishing, fish processing and rearing also play a major role. Most of the larger towns have active fishing ports and the products are often processed on site or in the vicinity. For example, there is a fish canning factory in Melbu on Hadsel , and frozen fillets are produced in Myre on Langøya. About half of the industrial jobs in the region are related to fish processing, the rest is mainly divided between services in the broadest sense (e.g. tourism, trade, transport) as well as the public service and educational institutions. There are also metalworking companies, shipyards and construction companies.

The strong position of the local press in Norway is evident in Vesterålen in a particularly high density of smaller newspapers.

The region's islands are connected to each other and to the mainland by five bridges and two tunnels. The European route 10 connects Vesterålen with the European route 6 , Narvik and Sweden . The ferry from Melbu to Fiskebøl connects Lofoten to it. Other important ferry connections are Kaljord - Hanøy to Lofoten and Lødingen- Bognes to the mainland.

The regional bus routes are very reliable and partly correspond with flights from / to Harstad / Narvik Airport (in Evenes ), with the train to / from Narvik, with various ferry and boat connections and with each other. The two most important national bus routes are the Lofotekspressen from Lofoten to Narvik and the Flybussen from Sortland to Harstad / Narvik Airport.

There are two airports for air traffic, Andøya Lufthavn in Andenes and Stokmarknes Lufthavn in Skagen, from which regular flights go to Tromsø and Bodø.

Vesterålen is often mentioned in the same breath as the more famous Lofoten region . Many Lofoten trips almost inevitably lead through Vesterålen, which gives the impression that the two archipelagos are just one. In fact, however, these are two different regions, both in terms of landscape and economy.

The most famous tourist attractions of Vesterålen are the whale safaris , which start from Andenes and Stø . The old and picturesque fishing village of Nyksund has been rebuilt in recent years and is now a popular destination. In addition, the whale center in Andenes, founded in 1988, is an interesting starting point for travelers. Also of interest is the Hurtigruten Museum in Stokmarknes, the former place where the mail line was founded.