Referendum on the remunicipalisation of Berlin's energy supply

The referendum on the remunicipalisation of Berlin's energy supply is a failed referendum that was voted on on November 3, 2013 in the State of Berlin ; He strove for the re-transfer of the Berlin power grid into municipal ownership ( remunicipalisation ) and the establishment of a municipal utility . The Berlin electricity network has been operated by Stromnetz Berlin GmbH (a Vattenfall subsidiary ) since its privatization and until the current license expired on December 31, 2014 .

The coveted bill failed in the vote and was therefore not adopted. Although 83 percent of the voting participants voted yes , the quorum of 25 percent of all voters was narrowly missed with 24.1 percent. This meant that 21,374 yes-votes were missing for a successful outcome. 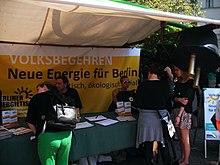 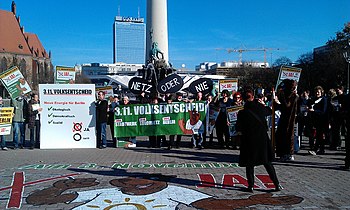 Final rally of the popular initiative “New Energy for Berlin” on October 31, 2013 at the Neptune Fountain in front of the Rotes Rathaus

An alliance of around 50 organizations, the Berliner Energietisch , carries the original referendum and the upcoming referendum. These include the Berlin sections of Attac , the Association for the Environment and Nature Conservation Germany , the Green League , the People's Solidarity and the Education and Science Union, as well as local organizations such as the Berlin tenants' association , the Berlin tenant community and the group for the Interventionist Left a left flow . The alliance sees itself as independent of parties, but it is supported by the Berlin associations of the SPD , Greens , Left , Pirates and ÖDP .

The sponsors cite the reason that climate change has not yet been effectively countered. This is why a fundamental energy transition is required both in terms of energy generation and consumption. This has to be done in a socially acceptable way , since with rising energy prices the energy poverty also increases. After the negative experiences with the partial privatization of Landesbank Berlin and Berliner Wasserbetriebe , the owners also consider a high degree of democratic control to be necessary.

In 1997, the state of Berlin sold its majority of 50.7 percent in the municipal electricity supply company Bewag to an industrial consortium. After several resales, Bewag was absorbed into Vattenfall . The operative business was outsourced and split up in a second step. The Berlin distribution network was transferred to Vattenfall Europe Distribution Berlin GmbH, customer service and sales were transferred to two companies based in Hamburg.

In the summer of 2011, the Berlin Energy Table was formed based on the successful model of the Berlin Water Table with the aim of organizing the power supply in Berlin according to democratic, ecological and social criteria. In 2012, the initiative took the formal hurdles for initiating a referendum: Under the title New Energy for Berlin - Democratic, Ecological, Social , 30,660 valid signatures were collected by July 3rd. In a statement on August 14, the Berlin Senate expressed concerns about the content, but no legal objections were raised against the admissibility. After the House of Representatives had not commented on the project within the statutory period, the initiative applied for the referendum to be carried out. The title of the referendum was changed to the current one.

At the same time as the referendum and referendum, the Senate tried to found a municipal utility (but not on the basis desired by the energy table) and announced that it would also compete in the tender for the concession of the electricity and gas network, both as a pure self-contender and as well as a cooperation partner for possible third-party applicants. On October 24th, just ten days before the referendum, the Berlin House of Representatives decided, with the votes of the SPD and CDU, to found the announced municipal utility under the umbrella of Berliner Wasserbetriebe. The opposition criticized the short-term vote; Parliament was not given sufficient time to deliberate in advance, nor was the financing of the project clarified. In addition, one regards the version of such a resolution so shortly before a referendum on the same topic as “gross disregard for popular sovereignty”. The Berliner Energietisch initiative also criticized the decision, speaking of an “interception law” and the establishment of a “Ministadtwerk” which “only serves the tactical goal of taking the wind out of the sails of the referendum”.

The vote was taken on the draft law for the democratic, ecological and social energy supply in Berlin (Energie VG) , which essentially pursues the following objectives:

The bill provides for public utilities and a network company to be set up as an institution under public law. The purpose of the grid company is to take over the power grids on January 1, 2015. If a state-owned company is awarded the contract for the electricity grid in the current tendering process, this company is to be merged into the new grid company. The municipal utilities should contribute to the fact that in the long term Berlin's energy supply will come entirely from decentrally generated renewable energies . In addition, the bill also contains social and democratic requirements.

The municipal utilities are to generate and sell renewable energy. In addition, they should be an integrated energy service provider who also takes advantage of energy-saving opportunities and advises private individuals on energy-saving projects and the decentralized generation of renewable energies .

The energy produced and distributed should come from 100 percent renewable sources. To this end, the municipal utilities are to develop decentralized generation capacities. For a transitional period, highly efficient combined heat and power plants should also be permitted.

In addition to operating the network, the network company should also ensure that it is expanded in line with changing production and consumption structures. In particular, it should enable the rapid connection and feed-in of renewable energies.

All those previously employed in network operations are to be offered a takeover by the network company to be founded. The existing collective agreements and works agreements are to be adopted. The number of employees should remain stable during the term of the concession agreement.

Direct election of the Board of Directors

Stadtwerke and Netzgesellschaft are each to be controlled by a 15-member board of directors . This should include the Senator for Economics and the Environment as well as seven employee representatives, as well as six board members who are directly elected by all residents registered in Berlin.

The draft law provides for direct influence between the ballots for the population: An initiative can request to be heard by the board of directors if it has 3,000 signatures. The Board of Directors must then decide on the proposal within three months. If 5,000 signatures are submitted for a concern, the Board of Directors must conduct a customer survey, the result of which is not binding.

For the State of Berlin and in each district , a meeting should take place at least once a year to discuss the matters of the municipal utilities and the network company. Recommendations from the meetings must be dealt with by the Board of Directors within three months. Further assemblies can be called at the initiative of the population.

The municipal utilities and network company should each appoint an ombudsperson who will serve as a complaints office for customers and employees.

The draft law aims for a high degree of transparency. Meetings of the Board of Directors should be public. In particular, the agenda of the meetings, resolutions passed and reports of the management are to be published on the Internet.

Statement by the Berlin Senate and the Berlin House of Representatives

Both the Berlin Senate and the House of Representatives (with the votes of the government coalition consisting of the SPD and CDU) recommended that the referendum be rejected. In its statement, the Berlin Senate considered the bill put to the vote "in essential parts superfluous and in other parts wrong". In particular, three arguments were put forward:

On the one hand, considerable liability risks for the Berlin budget are identified. With the proposed establishment of a municipal utility as a public-law institution, Berlin would be directly and fully liable, in contrast to the state-owned companies that act according to the Berlin Works Act, such as the Berlin city cleaning company or the Berlin transport company. In addition, the control of the company to be founded is inadequate, since the supervision takes place via the board of directors, who in turn can determine remuneration and liability relief themselves. The composition of the board of directors, in which only two senators would represent the public control by elected representatives, was criticized. MPs would not have a seat on these supervisory bodies, so the liability holder would not be adequately represented. Together with the comprehensive funding commitments made in the concept put to the vote, the concept is viewed as prone to loss, since the proposed municipal utility is allowed to act uneconomically.

Berlin has also already established a network operation, so there is no need to found another network operator. The Landesbetrieb Berlin Energie has been involved in the current procurement procedure for the Berlin electricity grid since 2012, and a newly founded institution can no longer participate in this procedure. At this point it was also questioned to what extent a merger of the public utility company to be founded with the already existing network company was possible, as the Energietisch considered to invalidate this argument.

The energy table's draft law also does not improve environmental and climate protection policy. Due to federal regulations, network operators would have to grant every company non-discriminatory network access. Even if the state of Berlin bought the network, nuclear or coal electricity would be passed through the Berlin network. The exclusive supply of Berlin with green electricity pursued by the energy table ignores this fact. The goal of the citizens' initiative to make the Berlin energy network fit for the decentralized introduction of renewable electricity is already in place and is being implemented accordingly.

Summary result: The quorum of 25 percent of all eligible voters was missed with 24.1 percent (deep red box). The draft law was therefore not adopted (despite 83 percent approval); the referendum failed because the quorum failed to reach 25 percent.