Portrait, 1890 on the occasion of the 25th anniversary of the benzene theory

August Kekulé , born Friedrich August Kekulé , from 1895 Kekule von Stradonitz , (born September 7, 1829 in Darmstadt , †  July 13, 1896 in Bonn ) was a German chemist and scientist who laid the foundations for the modern structural theory of organic chemistry .

August Kekulé was born ( Kekule von Stradonitz since the recognition of the old Bohemian nobility in 1895 ) as the son of a Darmstadt civil servant family with aristocratic Bohemian ancestors. His father Ludwig Karl Kekulé (1773–1847) was a war councilor and rose breeder; his cousin Reinhard Kekulé von Stradonitz was a classical archaeologist.

With the marriage of the Englishwoman Stephanie Drory (* 1842) in Gent , a daughter of the gas works entrepreneur George William Drory , and the birth of the son, who later became the genealogist and lawyer Stephan , the spelling Kekulé was officially registered in 1862 in order to use French grammar to pronounce the To clarify the final E phonetically. Just two days later, Stephanie Drory died of puerperal fever . Kekulé's second marriage to Luise Högel (1845–1920), which was concluded in 1876, resulted in three more children.

In his youth, his hobbies were hiking, botany, collecting butterflies and drawing. He started his school days at the humanistic Ludwig-Georgs-Gymnasium in Darmstadt and was a good student with a talent for languages, so that he spoke French, Italian and English in addition to German.

Although Kekulé was a weak youth, he developed into a robust and healthy adult who was very active in sports until the end of his school days in 1847. He loved juggling and dancing and was a talented and fun impersonator.

Since he was a gifted draftsman and his father was close friends with famous architects, he began to study architecture with Hugo von Ritgen at the University of Giessen . But he turned to chemistry when he attended lectures by Justus von Liebig . For one semester he was at the Polytechnic in Darmstadt , because his relatives gave him a period to think about his career. He temporarily attended Paris University , where he was a student of Jean Baptiste Dumas and met Charles Frédéric Gerhardt and Adolphe Wurtz . In 1852 he received his doctorate from Liebig with the thesis “On amyloxydsulfuric acid and some of its salts” . He then became an assistant to Liebig's student Adolph von Planta (1820–1895) in Reichenau Castle , Graubünden (Switzerland).

His creative phase began when he was assistant to John Stenhouse at St Bartholomew's Hospital in London from 1854 to 1855 . He had also befriended Alexander William Williamson there . In England he was the first chemist to introduce sulfur into organic compounds by replacing an oxygen. He synthesized thiocarboxylic acids and mercaptans from diphosphorus pentasulfide. Already in England, Kekulé preferred the spelling of Charles Gerhardt to indicate in a formula that sulfur and oxygen are dibasic (divalent), hydrogen and chlorine are only monobasic.

In 1856 he completed his habilitation in Heidelberg , where he was a private lecturer from 1856 to 1858, and during this time he had heated debates with Adolf von Baeyer . In 1858 he became a full professor of chemistry at the University of Ghent in Belgium through Liebig's intercession, and in 1867 accepted an appointment from the University of Bonn . His assistant Theodore Swarts then took over the chair, and his experimentally extremely successful assistant Carl Glaser followed him to Bonn.

When Kekulé was appointed to Bonn in 1867, the shell of the new chemical institute at Poppelsdorf Palace was only finished. He had a major influence on the furnishings and interior design of the large building, which made it one of the best equipped institutes in all of Germany; on May 11, 1868 it was ready to move into. It attracted many German and foreign students to the Rhine, so that the building was soon bursting at the seams. An extension was only approved when Kekulé turned down an offer to Munich to succeed Justus von Liebig.

Kekulé was less of a practical chemist than more of a theorist, and some of his contributions were very speculative. His main work was the representation of organic molecules through structural formulas . Before him, only the carbon-hydrogen-oxygen ratio of organic compounds was known and the compounds were given in empirical formulas (more precisely as radicals) in the literature. His field of work was carbon chemistry and the elucidation of the constitution of aromatic compounds . 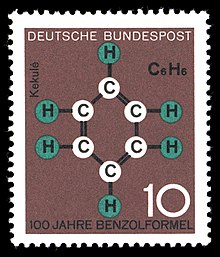 Classic symbolism of organic chemistry - the benzene formula by August Kekulé, depicted on a postage stamp from 1964

At the same time as AS Couper in 1858, he recognized the tetravalence of carbon and the existence of carbon-carbon bonds. For the number of binding partners x an atom used Kekule the terms "x-atomig", "x-basic", and later that of Emil Erlenmeyer term introduced "valent" as well as the concept of valence , the Hermann Wichelhaus had introduced. From the number of atoms and their valences, chemical structures could now be deduced that could easily be written on a piece of paper. In Speyer in 1861, Alexander Butlerow proposed the term chemical structure to represent a molecule with its valences. The ideas for structural chemistry were already developed in Kekulé's textbook on organic chemistry from 1859. It was not until his textbook from 1864 that Kekulé used the structural formulas to represent organic molecules. The structural formula made it possible for every chemist to quickly see how the molecule of a substance is structured.

The structures of the aromatic compounds were still unknown to him at this time.

He published his proposal for the structure of the benzene ring for the first time in a French journal in 1865 and published it in German in Liebig's annals in 1866 under the title Investigations over aromatic compounds . Since the molecules of many compounds in coal tar, the most important raw material for organic chemists at that time, consisted of one or more benzene rings, knowledge of the structure of benzene was particularly important. Now chemists were able to derive the structural formulas for all aromatic compounds from elemental analysis and chemical reactions and synthesize new compounds on the basis of these formulas. The structural formulas formed the basis for advances in chemistry.

After a measles disease, which had seriously impaired his health, he turned to the publication of his work. Much of his work has appeared in the Annals of Chemistry and Pharmacy . His most influential work was the unfinished textbook on organic chemistry , the four volumes of which appeared in 1859 (reprinted in 1861 and 1867), 1866, 1882 and 1887.

Monument in front of the old chemical institute of Bonn University

Kekulé died in Bonn in 1896 and was buried in an honorary grave in the Poppelsdorf cemetery , where his grave can still be visited today. His monument, created by Hans Everding and erected in 1903, stands in front of the old chemical institute of Bonn University at Meckenheimer Allee 168. Similar to the famous Brussels Manneken Pis , the statue is decorated with various seasonal utensils from time to time; In contrast to Manneken Pis, however, it is not from an official, established tradition, but rather sporadically and spontaneously. On May 9, 2014, a memorial plaque was unveiled at the same location as part of the Historic Chemistry Sites program . Kekuléstraße has existed in Bonn-Poppelsdorf since 1905. Kekulé's estate is in the possession of the Deutsches Museum in Munich.

The University Institute for Organic Chemistry and Biochemistry (now located in Bonn-Endenich) was named "Kekulé Institute" in his honor.

The main lecture hall of the chemistry department at the Technical University of Darmstadt is named after him.

Before Kekulé's theory, there were only vague ideas about how the atoms in a molecule are linked. The bonds between individual atoms and structural formulas were not yet known. Kekulé used the terms “atomic” or “basic” to indicate the number of binding partners of an atom. Erlenmeyer used the terms one, two, three and four valued for the number of binding partners of an atom. Many chemists in his day thought that the structures of molecules could not be discernible because reactions changed the structure unpredictably. Kekulé studied various carbon compounds , especially benzene .

At the Kekulé celebration in March 1890, Kekulé described his discoveries as follows:

“ It has been said: the benzene theory appeared like a meteor in the sky, it was absolutely new and came suddenly.
Gentlemen! That is not how the human mind thinks. Something absolutely new has never been thought of, certainly not in chemistry. "

As a result of the lecture, he discussed the other researchers on structural chemistry: Auguste Laurent , Jean Baptiste Dumas , Jöns Jacob Berzelius , Frankland.

Kekulé also reported about his daydreams in a bus:

I sank into daydreams. The atoms flickered before my eyes. I had always seen them moving, those little beings, but I had never been able to hear the way they were moving. Today I saw how often two smaller ones joined together to form pairs; how the bigger two embraced small ones, the bigger three and even four of the small ones held fast, and how everything turned in a whirling dance. I saw how larger ones formed a row and only dragged smaller ones along at the ends of the chain. ...
... The call des Conducteurs, Clapham Road, woke me from my dreams.

You don't go on research trips on express trains, and studying even the best textbooks doesn't make you an explorer. - Whoever wants to train to be a researcher must study the original works of travelers; so thoroughly that he is not only able to read between the lines, but can also guess the thoughts that have not been expressed. He must follow the path of the Boy Scouts; He has to pay attention to every footprint, every bent branch, every fallen leaf.

In this way, he made the diversity of carbon compounds understandable in a surprisingly simple manner and brought order to the prevailing confusion. However, the structure of benzene remained an open question. Kekulé reported a waking dream in 1890. On the night of his discovery in the winter of 1861, he was sitting at his desk and half asleep watched the sparks from the fireplace. Suddenly, he said, a dream had brought the long-sought solution: he had seen the carbon and hydrogen atoms dance before his eyes. In this dream the old, alchemical symbol of the Ouroboros snake appeared to him, the head of which bites its own tail. Also as early as 1861, Loschmidt used a ring as a symbol for benzene in his little-noticed publication "Constitutional formulas of organic chemistry in graphic representation".

In 1865, Kekulé published the first version of his benzene theory in French (he was a professor in Ghent from 1858–1867 ). This theory was based on the principle that the molecule of benzene consists of a ring of six carbon atoms. In 1866 he published a lengthy German article (in Liebig's Annalen der Chemie) on the same subject.

In 1870 he discovered the azo coupling ; In 1872 he supplemented his benzene theory with the oscillation hypothesis of the alternating single and double bonds to explain the properties of benzene.

Kekulé's work made a decisive contribution to the development of organic chemistry and led to a boom in the German chemical industry, above all the dye manufacturers.