Allermöhe is located in the northern part of the alluvial land in the Elbe river basin ( Elbe glacial valley ), which forms a very wide valley at this point. The area of ​​the district is bordered to the south by the Dove Elbe , a sealed branch of the Lower Elbe . The lake Hinterm Horn was created in the 1960s through gravel mining .

The ground in Allermöhe is typical of the march and determined by the earlier course of the Elbarme. Soil types are clay over peat , and also a soil made of alternating fine or medium sand and clay. In the direction of the Dove Elbe there is also a small proportion of clay over fine to medium sand. An average rate of groundwater recharge is observed at Allermöhe (> 100–200 mm / a). Neu-Allermöhe West is classified in the landscape program as an “area with increased groundwater sensitivity”.

Investigations in 1999 found an average water quality (Class II – III) in the Allermöhes canal system , which can be described as critically polluted. Waters of these classes are heavily polluted with organic substances from agricultural use as well as the nutrient-rich marshland itself.

Small animal species such as snails , mussels , fly larvae , sponges and small crustaceans are found in the water .

Structure of the district

The settlement of the place was divided into three quite different parts until 2010. The rural street village of Allermöhe has been stretching along the dike of the Dove Elbe, today's Allermöher dike , since the 12th century . The Allermöhe industrial park is located northwest of the original street village.

In what was then the north of the district, the Neu-Allermöhe West housing estate was built in the 1990s . Together with the Neu-Allermöhe Ost settlement, which was built in 1982 and is characterized by single and multi-family houses, from the Bergedorf district, these areas were merged into the new Neuallermöhe district on January 1, 2011 . At the same time, the district received a small area south of the A 25, while the areas of the Alt- Nettelnburg settlement north of the motorway were assigned to the Bergedorf district.

Around 1150, the cultivation of the swamp wilderness in the tide-dependent river area of ​​the Elbe began. The first dykes were built here with the participation of Dutch settlers and engineers.

The place Allermöhe was first mentioned in 1162 as "Anremutha". In High German, the name means "at the other mouth" and referred to its location on the Dove Elbe . Allermöhe has been part of the Hanseatic city since 1395, when Holstein-Rendsburg sold the village together with Bill- , Ochsen- and Moorwerder to Hamburg. In 1410 Hamburg set up the Landherrschaft Bill- and Ochsenwerder , to which Allermöhe was also assigned. From then on, a councilor represented the interests of the city and set up local bailiffs who were given police power. After the place was protected by a dike at the beginning of the 15th century , the Dove Elbe was also dammed in 1471; The ebb and flow of the tide no longer had any influence on the march.

Allermöhe has developed since that time as a long street village along the dike line; because only in this area is the subsurface suitable for building houses. The areas behind it were used for agriculture: the fertile marshland was used for high-yield agriculture. Since the farmers had to struggle with excess rainwater and high groundwater levels, a complex network of ditches was built. Dike breaches also threatened the area again and again.

Selling their agricultural products - strawberries , cut flowers, hops or apples - especially to nearby Hamburg, brought many residents considerable financial success, which is evident from the elaborate facades and decorations of many older houses. Allermöhe and the neighboring towns still supply Hamburg and other regions of Germany with vegetables and flowers today.

At the end of the 18th century, a calico printing company was established as the first larger non-agricultural operation . In 1830 the previous rulership of Bill- and Ochsenwerder was restructured to become the rulership of the marshland . 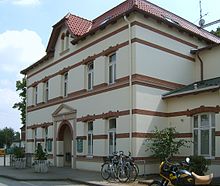 As early as the 1920s there were plans for a large settlement called Billwerder-Allermöhe on the railway line to Bergedorf and Berlin for the first time. The plans that were resumed in the 1970s led to the construction of the Neu-Allermöhe housing estates in the Bergedorf and Allermöhe districts, which have been part of the Hamburg-Neuallermöhe district since 2011 . With the simultaneous assignment of the areas of a settlement in Alt-Nettelnburg to Hamburg-Bergedorf , the population of the district fell significantly.

Note: The following refers to the time before the new district structure

Data according to the North Statistical Office.

As a result of the outsourcing of residential areas to Bergedorf and the Neuallermöhe district, which existed from 2011, the population fell to around 1300 people.

For the election to Hamburg citizenship , Allermöhe belongs to the constituency of Bergedorf . The 2015 state election led to the following result:

The so-called Marschen-Autobahn, the Bundesautobahn 25 , runs through Allermöhe with the junction points Hamburg-Allermöhe (exit 2) (after which it forms the northern border to the districts of Neuallermöhe and Bergedorf), Hamburg-Neuallermöhe-West (exit 3) and Hamburg-Nettelnburg (Exit 4) . It connects the district with Hamburg and Bergedorf.

Allermöhe had been on the Hamburg-Bergedorfer Railway since 1842 , which was extended to Berlin in 1846 . The Hamburg S-Bahn runs on the two tracks on the north side of this line . On May 30, 1999, this also received an Allermöhe stop . Today, the line partly forms the border between Billwerder (north of the line) and the Neuallermöhe district to the south, which was rebuilt in 2011 and no longer directly touches the train station and the line. There the lines S21 (every 10 minutes during the day) and S2 (only during rush hour in the morning and afternoon) run to downtown Hamburg (travel time: 16 minutes) and to Bergedorf train station (travel time: 5 minutes).

The VHH takes care of the bus traffic within the Hamburger Verkehrsverbund (HVV) with bus lines, which are mainly directed to the Bergedorf train station. This also includes the night bus routes 329 and 629 to / from Neuallermöhe and some bus routes that are geared towards school traffic. Line 321 connects the Mittlerer Landweg S-Bahn station via Allermöher Deich with Bergedorf station , it runs every hour from Monday to Saturday until around 9 p.m., and every two hours on Sundays and public holidays. Then there is an on- demand service between Bergedorf station and Allermöhe (south of the autobahn) ( call and collective taxi AST 829 operated by VHH to the Vier- und Marschlande according to the timetable ), every hour from 10:10 p.m. to 2:10 a.m. , on weekends until 5:10 a.m., from Bergedorf station to the front door, and from 10:40 p.m. from Allermöhe. Orders are made, stating the destination and number of people to be transported, one hour before the journey on the Hamburg telephone number 721 18 80. The fare in Zone 2 for Allermöhe is 4.20 euros for one person or as a surcharge on a valid HVV- Season ticket 3.00 euros, for children 1.40 euros in any case (as of January 2020). 00

Allermöhe, together with the districts of Bergedorf, Lohbrügge and Neuallermöhe, belongs to Region 20a of Hamburg's school planning (as of 2019).

None of the following schools are located in the Allermöhe district, but they supply the district with (as of the 2017/18 school year, from west to east):

The water sports center Hamburg-Allermöhe is located on the Dove Elbe and includes the state performance center for rowing and canoeing athletes as well as a regatta course designed for international competitions.

The church of Allermöhe was consecrated in 1614.

The Evangelical Lutheran Trinity Church is located in the street village of Allermöhe . It was consecrated on February 2, 1614. The wooden bell tower ( bell stack ) from the 15th century , which still comes from the previous church, is considered to be the oldest surviving structure in the marshland. The winged altar , which the Hamburg sculptor and wood carver Hein Baxmann created in 1613/1614, is also remarkable .

There are war graves in the cemetery

The popular outdoor rock festival Wutzrock has been held annually at Eichbaumsee since 1979 .