Lohbrügge ( Low German : Lobrüg ) is a district in the south-east of Hamburg , which borders on Bergedorf to the west and belongs to the Bergedorf district. The district has a more suburban character, but the construction of some large estates in the 1960s gradually contributed to the emergence of social hot spots.

Lohbrügge is located on the northern edge of the Elbe glacial valley and borders the districts of Billwerder , Bergedorf and Billstedt , as well as the Stormarn district in Schleswig-Holstein . 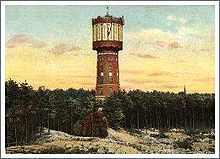 The name Lohbrügge denotes a forest or clearing with the prefix Loh and a bridge with the suffix brugge . Accordingly, it is due to a river crossing. The area of ​​today's Lohbrügge was first mentioned in a document on November 1st, 1257. Count Johannes and Gerhard von Holstein, Stormarn and Lauenburg sold the Asbrook to twelve surrounding villages with the certificate for "70 Mark Hamburgische Pfennigs" , including Lohbrügge and also Glinde, Schönningstedt, Boberg, Steinbek, Oststeinbek and Hope (predecessor village of Sande) belonged. Lohbrügge was a farming village consisting of a few farms in an extensive meadow and arable landscape, probably located where today Binnenfeldredder and Leuschnerstrasse meet ( 53 ° 30 ′ 10 ″  N , 10 ° 12 ′ 17 ″  E ). 53.502909 10.204849

The village of Lohbrügge was given to the Reinbek monastery in 1303 . With the secularization of the monastery (1528), Lohbrügge and Hope, now called Sande, fell to the Reinbek office in 1544, which belonged to the dukes of Schleswig-Holstein-Gottorf . In the Steinbeker church book of 1580 there are references to the place Sande, a route from today's Alte Holstenstraße west over the Geest .

Around 1700 Sande and Lohbrügge had a combined population of around 250. In 1750 Lohbrügge, to which the smaller settlements Sande and Ladenbek belonged, was pledged to Hamburg until 1768; In 1773 the whole region became Danish. In 1846 the Hamburg-Berlin Railway was opened with a station in the southern Bergedorf . Hope itself probably went under due to sand drifts, the name Höperfeld is reminiscent of the former village. Around 1850 Lohbrügge had 600 inhabitants and by 1890 - mainly due to industrialization - already almost 3500.

When Schleswig-Holstein was annexed to Prussia, Lohbrügge became part of the newly formed Stormarn district . In the following years the volunteer fire brigade Lohbrügge, 1892 the association for physical exercises and 1894 the parish Lohbrügge were founded. After the split from Steinbek , which became an independent municipality, Lohbrügge, Sande and Ladenbek were merged into the large municipality of Sande in 1895. In 1899 the Church of the Redeemer in Lohbrügge was consecrated.

In 1929 the large community of Sande merged with Boberg to form the community of Lohbrügge. Some street and place names still remind of the former place Sande, such as the Sander Damm on the former local border to Bergedorf, the Sander Straße and the Sander Tannen . Sande roughly comprised the area between Sander Damm in the east and the local border with Boberg in the west, extending as far as the course of today's Bergedorfer Strasse and Ladenbeker Weg in the south and Lohbrügger Landstrasse in the north. In earlier times the southern sand was almost completely forested with pine trees ; In the post-war years, however, the Sander fir trees were almost completely processed into firewood and could later be laboriously reforested. Some remnants of the original forest can only be found today in the lowlands on Ruselerweg / Krellweg . On the Geest slope , street names such as Höperfeld are reminiscent of agricultural use at the time.

In the Reichstag election in March 1933 , 32.3% voted for the NSDAP , 3.6% for the DNVP , 45.0% for the SPD and 15.2% for the KPD, with a turnout of 93.3%. In this election in Lohbrügge, the SPD was able to achieve its highest result in what was then Schleswig-Holstein. The author Frank Omland attributed this to high unemployment.

Until 1937 the municipality of Lohbrügge developed independently of Hamburg and Bergedorf. While the former agricultural town of Bergedorf was jointly owned by the Hanseatic cities of Hamburg and Lübeck as early as 1420, and in 1868 only Hamburg was assigned, the Lohbrügger area was alternately under Holstein, Danish and, finally, Prussian rule. It was not until 1937 that the municipality of Lohbrügge was added to the city of Hamburg and, as part of the Greater Hamburg Act, became a district of Hamburg for some time and finally became part of the Bergedorf district in 1951 .

In the years after the Second World War, strong population growth in the Hanseatic city of Hamburg and extensive destruction caused by the war led to a housing shortage. This made it necessary to expand the settlement areas outside of Hamburg's city center. Today's Lohbrügge-Nord area was largely an agricultural area after the war and hardly developed. The Bergedorf-Bille building cooperative, founded in 1948, implemented a number of larger building projects. As part of the so-called construction plan 60 , an area of ​​around 243 hectares was designated as a construction area for a large estate under the name Lohbrügge-Nord . In the 1960s, the construction of the Lohbrügge-Nord settlement began in accordance with the so-called garden city concept . Various private as well as non-profit property development companies began to implement the construction project in 1961, which was completed in the mid-1970s. Due to this expansion, the population increased sharply.

Boberg was first mentioned in a document in 1233 as Bocberge . The name means Buchenberg . The farming village was on the highway leading from Hamburg to Bergedorf. The place retained its rural structure until the end of the 19th century , when a first workers' settlement was built and a voluntary fire brigade was founded in 1890. In 1929 Boberg, which at that time had around 900 inhabitants, was incorporated into Sande, which was also renamed Lohbrügge . Lohbrügge became part of Hamburg in 1937 due to the Greater Hamburg Act . In the 1990s a suburban settlement ("Dorfanger Boberg") was built, which finally made the district lose its rural character. Boberg can now be divided into three parts: “Neu Boberg” north of Bergedorfer Straße (“Dorfanger Boberg”), the “Alt Boberg” part along the Am Langberg road and the Boberger Niederung south of the slope with its many traditional farmhouses.

For the election to Hamburg citizenship , Lohbrügge belongs to the constituency of Bergedorf . The 2015 state election led to the following result:

For the federal election , Lohbrügge belongs to the constituency of Hamburg-Bergedorf - Harburg . 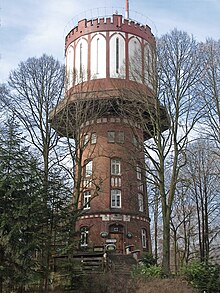 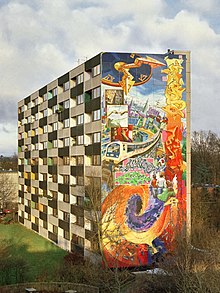 In the south of Lohbrügger there was also the Sander Tannen grammar school, which expired in the late 1980s in favor of the Bergedorf comprehensive school.