Billstedt ( Low German Billsteed ) is the easternmost district in the Hamburg-Mitte district of the Free and Hanseatic City of Hamburg . It includes the formerly independent villages Kirchsteinbek, Öjendorf and Schiffbek as well as the large settlement Mümmelmannsberg . With around 70,000 inhabitants, it is the second largest district of Hamburg after Rahlstedt.

In the western part on the border to Hamburg-Horn , low-storey buildings from former workers' settlements predominate, some as terraced houses with attached back gardens.

In the northeast, the district boundary coincides with the course of the motorways 24 and 1 , which meet here at the Hamburg-Ost junction . The motorway junctions Hamburg-Jenfeld ( A 24 ) as well as Hamburg-Öjendorf and Hamburg-Billstedt are located on the A 1 in the Billstedt area . In between there are 4.5 square kilometers of largely undeveloped area in the square up to the Jenfelder Bach or the former Schiffbek district in the west and to Glinder Straße or the Öjendorf settlement in the south. This largely consists of the Öjendorfer Friedhof and the Öjendorfer Park with the approximately 0.5 square kilometer Öjendorfer See . In the northern part, bordering Jenfeld, is the small high-rise settlement of Dringsheide.

The southern part in the triangle between the Schiffbeker Höhe / Glinder Strasse road and the Hamburg-Billstedt motorway junction is largely built on with single-family houses. The southeastern corner on the border with Oststeinbek and District mountain village is the large settlement Mümmelmannsberg taken.

A typical city center development with multi-storey houses and shops can only be found in the area of ​​the fork of Möllner Landstrasse and Billstedter Hauptstrasse, located south on the border to Hamburg-Billbrook . The district center with the Billstedt customer center of the Mitte district, a shopping center and the bus station is also located around the Billstedt U2 / U4 underground station . The southern border forms the eponymous Bille.

The district is bordered by:

Billstedt was created on February 2, 1928 from the merger of the previously independent communities of Kirchsteinbek, Öjendorf and Schiffbek , which belonged to the Stormarn district and were thus Prussian . The three municipal councils developed the name in a lengthy discussion; he refers to the river Bille , which bordered the new town to the south. In the Reichstag election in March 1933 in Billstedt, 27.5% voted for the NSDAP , 5.5% for the DNVP , 33.3% for the SPD and 26.4% for the KPD, with a turnout of 90.2%. Thus, the two left parties, the SPD and KPD, received almost 60 percent of the vote, which was very unusual at the time. In the course of the Greater Hamburg Law , it was incorporated into Hamburg in 1937/38. During construction work on a sports field in Billstedt in November 2017, an excavator driver came across a huge swastika measuring four by four meters, which until then had been hidden under the sward at a depth of 40 centimeters. There used to be a large memorial at the site in the Hein Klink Stadium. The swastika was removed a few days after it was discovered.

The large housing estate Mümmelmannsberg was built in the early 1970s .

Evangelical Lutheran cemetery in Kirchsteinbek with a cemetery chapel

Kirchsteinbek is first mentioned in a document in 1212 as Steinbek ( Low German : Steenbeek ). The name goes back to the Glinder Au , the stony brook dividing the village. With the construction of the first church in 1239, the village is also called Kirchsteinbek . In 1321 a grain mill is mentioned for the first time in the village. Since that year it has also belonged to the Reinbek monastery and became the central parish of a parish to which 18 other villages belonged. After the Reformation and the associated dissolution of the monastery property, Steinbek came to the rulership of Reinbek .

After the annexation of Schleswig-Holstein by Prussia, the place was finally renamed Kirchsteinbek and assigned to the newly founded Stormarn district. With the introduction of the Prussian municipal constitution in 1889, the place became part of the Schiffbek district . The urbanization of the previously rural community began around 1900. In 1928, Kirchsteinbek was merged with Schiffbek and Öjendorf to form the new large community of Billstedt. At that time it had 2,154 inhabitants.

Öjendorf ( Low German : Öddendörper ) was first mentioned in 1224 as Odingetorpe . The name leads back to the family name Olding . Since 1265 the village belonged to the Kirchsteinbek parish. Previously, the residents - like those from Schiffbek - were parished to the main church of St. Jacobi in Hamburg . Öjendorf was always the smallest of the three suburbs. At the time Billstedt was founded, just under 700 people lived there. Some old farmhouses are still preserved in the village today.

The Öjendorf volunteer fire brigade was officially founded in 1890, with documents showing a fire brigade in Öjendorf as early as 1880.

In Öjendorf lies the local recreation area Öjendorfer See and the main cemetery Öjendorf , which was created in 1966 as Hamburg's second main cemetery.

Schiffbek ( Low German : Schippbeek ), like Kirchsteinbek, was first mentioned in a document in 1212. The name, formerly Skipbeke , describes the point up to which the Bille was navigable and literally means "navigable brook". Although the place was tributary to the Hamburg cathedral chapter, administratively it belonged to the Reinbek monastery, and after the Reformation then to the lordly office of Reinbek . When the jute spinning mill was founded in 1881, many workers from Poland and Bohemia moved to Schiffbek, which therefore also received a Roman Catholic community at the end of the 19th century .

As part of the Hamburg uprising of the Communist Party of Germany , the police station was attacked on October 23, 1923 and the weapons lying there were captured. Schiffbek developed into a center of the uprising. At the time of Billstedt's formation, the place had almost 9,000 inhabitants.

The former village is now the center of Billstedt. There is a customer center of the district office, a shopping center and a pedestrian zone .

The population in Billstedt is made up as follows (data from the North Statistics Office, as of December 2016):

Billstedt is one of the relatively low-income districts of Hamburg. The average annual income per taxpayer was around 20,473 euros in 2013 and is significantly lower than the Hamburg average (39,054 euros). 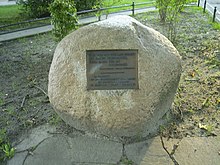 For the election to the citizenry and the district assembly , Billstedt belongs to the constituency of Billstedt-Wilhelmsburg-Finkenwerder . The 2015 state election led to the following result:

There is no significant manufacturing industry in Billstedt. The large Hermann Heins canning factory was only located near Archenholzstrasse / Schleemer Weg until around 1964. The majority of the workers in Billstedt found their livelihood mostly in the industrial areas of neighboring Billbrook and Wandsbek , as well as in the city center and the port of Hamburg. Due to the high unemployment, the parish of the Jubilate Church and the “Hamburg Volunteer Exchange”, supported by parts of the local economy, founded the “Job Cafe in the Multi-Generation House”.

Billstedt is directly connected to the national road network with three connection points to the federal motorways 1 ( Heiligenhafen - Saarbrücken ) and 24 (Hamburg - Berlin ) and the federal highway 5 .

Local public transport (ÖPNV) is guaranteed within the Hamburger Verkehrsverbund (HVV). The underground lines U2 and U4 connect the district (four stops) with downtown Hamburg . The bus station is located at the Billstedt underground station and is served by numerous bus lines from the Hamburger Hochbahn (north and west) and the Hamburg-Holstein transport company (VHH) (east and south).

The railway line of the former Südstormarnsche Kreisbahn , which is now operated by the Altona-Kaltenkirchen-Neumünster Railway ( AKN ) for occasional freight traffic (timber transport twice a week) from Glinde (train station) to Tiefstack , is of little importance .

The largest resident companies are Otto Wulff Bauunternehmung in Öjendorf and Adolf Neubauer Mühlenwerke in Kirchsteinbek, which process mica and are thus the last of the numerous mills that used to be. Various companies that are based on site as service providers are of great importance to the residents of Billstedt.

Until 2007, Billstedt formed a local authority area with the neighboring districts of Horn and Billbrook , the administration of which was based in Billstedt. For Mümmelmannsberg there was a local office that offered the district's services on site.

The SC Vorwärts-Wacker 04 , which emerged from a merger of SV Wacker 04 with Vorwärts Billstedt, is particularly successful in football, having played in the Oberliga Nord for several years and in boxing. In contrast, the success of the TV Gut Heil Billstedt is mainly in the water: the best-known department is the swimming division, for which Sandra Völker also stood from 1994 to 1999 . The third and smallest sports club in the "old" Billstedt is SV Billstedt-Horn, where Piotr Trochowski and Matthias Reincke began their football careers. Mümmelmannsberger SV and SC Europa 92 are at home in Mümmelmannsberg. 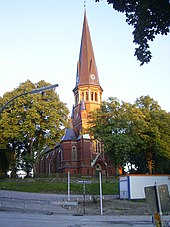 Today's Steinbeker Church (Dreieinigkeitskirche) dates from 1884 and is located on the Geestrand , so that it is a landmark that can be seen from afar. It was built according to plans by Otto Ritscher. Inside there are two chandeliers from 1679 and 1719, which come from the previous church.

The Kulturpalast has been located in the former waterworks on Öjendorfer Weg since 1993 . Courses, concerts, cabaret and cinema are part of the offer. With 250,000 visitors annually, the Kulturpalast is the largest district center in the Hamburg-Mitte district .

The BilleVue as a district festival for Billstedt was created in the rooms of the Kulturpalast through an initiative of the management of the facility.

With the Öjendorfer Park and the Waldpark Steinfurth, Billstedt has two public green spaces that are used for local recreation.