The title of this article is ambiguous. Further meanings are listed under Haste (disambiguation) .

Haste is a municipality in the district of Schaumburg in Lower Saxony .

Haste is located about 30 km west of Hanover on the northeast border of the Schaumburg district , south of the Mittelland Canal and the Haster Forest in an area cut by several traffic arteries, but dominated by forest and agriculture , between the cities of Bad Nenndorf and Wunstorf . The Haster Bach flows through the village.

The district area is ~ 12 km², of which about 8 km² are used for forestry. Haste is completely surrounded by forest to the west, north and east.

In clockwise direction, these are the city of Wunstorf and the communities of Suthfeld and Hohnhorst .

The district of Wilhelmsdorf, about 2.5 km to the west, belongs to the municipality of Haste. The core town is popularly divided into Alt-Haste, Waldfrieden and Ypres. However, these are not districts.

The council of the municipality of Haste consists of 13 council women and councilors. This is the specified number for the member municipality of an integrated municipality with a population between 2001 and 3000 inhabitants. The council members are elected for a five-year term by local elections. The current term of office began on November 1, 2016 and ends on October 31, 2021.

Sigmar Sandmann (SPD) has been mayor since 2006. Since 2011, he has also been running the community director. The community office is located in the community center at Hauptstraße 42.

Description: The coat of arms of Haste is divided in the shield; above in gold a leaping black roebuck, below in red a silver nettle leaf with three nails.

Haste has been known in hunting circles for centuries for the particularly frequent occurrence of black roe deer in the area . This color form, which occurs almost only in the Lower Saxony lowlands, achieves the highest percentages there; currently it is around 60%. A black roebuck is therefore shown in the Haster coat of arms.

The second largest Süntel beech in the Deister-Süntel region stands by the old forester's house , a natural monument that is around 150 to 180 years old .

A small industrial area has developed on the site of the old railway maintenance office. Larger companies are not located. The retail trade has settled on the main street.

A kindergarten is available for pre-school education. The primary school is responsible for the children from Haste, Hohnhorst and Suthfeld. It is run as an all-day school with supervision until 3 p.m. Secondary schools are available in Bad Nenndorf, Rodenberg, Barsinghausen, Lindhorst and Wunstorf. 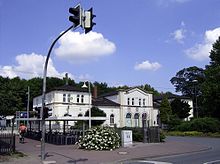 Haste is a branch station on the Hanover – Minden line : the Haste – Weetzen line branches off here as the Deisterbahn . The station building from 1847/48 was designed by Julius Eugen Ruhl .

The station is served every hour by RE trains to Hanover - Braunschweig and Minden - Löhne (further every two hours alternately to Bielefeld or Osnabrück - Rheine ); In December 2015, the Westfalenbahn replaced the DB Regio . The S-Bahn reaches Haste with the S1 (Minden– Wunstorf –Hannover) and S1 / S2 (Haste– Bad Nenndorf - Weetzen –Hannover – Minden / Nienburg ). A Park & ​​Ride facility is available for the 4,000 rail users daily .

The Schaumburger Verkehrs-Gesellschaft (SVG) ensures the public transport to the hinterland (partly to Rinteln) . The federal highway 442 leads through the place. The BAB 2 junctions Wunstorf-Kolenfeld or Bad Nenndorf can be reached in five minutes by car .

The passenger shipping can at the border Haste be dispatched. For the leisure and commercial vessels the nearby consist ports Wunstorf .

Municipalities in the district of Schaumburg