Mitchell "Mitch" Marner (born May 5, 1997 in Markham , Ontario ) is a Canadian ice hockey player who has been under contract with the Toronto Maple Leafs of the National Hockey League since July 2015 and has been the right winger since October 2016 plays. 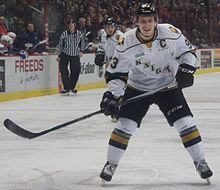 Marner in the jersey of the London Knights (2016)

Marner played with numerous youth teams until the summer of 2013, including the St. Michael's Buzzers from the Ontario Junior Hockey League . After he was selected in 19th overall position by the London Knights of the Ontario Hockey League in the 2013 OHL Priority Selection , he joined the team for the 2013/14 season and at the same time turned down a scholarship from the University of Michigan . Marner completed a successful rookie season and collected 59 points in 64 missions, which earned him the appointment to the Second All-Rookie Team of the league. In the following game year he formed an extremely successful storm series with Max Domi and Christian Dvorak . The attacker collected a total of 126 scorer points and ended the season as the second best scorer in the league behind Dylan Strome . Nevertheless, he was appointed to the First All-Star Team and received the Jim Mahon Memorial Trophy . In the summer of 2015, he was finally drawn in fourth position by the Toronto Maple Leafs of the National Hockey League in the 2015 NHL Entry Draft . At the end of July 2015, the Maple Leafs signed their draft pick and provided him with a three-year NHL entry contract .

The striker remained in the junior division for another year and with 116 points almost confirmed his performance from the previous year. Matthew Tkachuk , Christian Dvorak and he led the Knights to win the J. Ross Robertson Cup at the end of the season . Marner also received the Wayne Gretzky 99 Award and the Red Tilson Trophy , combined with being reelected to the First All-Star Team. In the subsequent Memorial Cup , Marner was the top scorer and Most Valuable Player - for which he received the Ed Chynoweth Trophy and Stafford Smythe Memorial Trophy - the decisive factor for winning the traditional tournament. Finally, at the end of the season, he was named CHL Player of the Year .

In July 2016, Marner switched to the professional field and made it into the NHL roster of the Toronto Maple Leafs at the beginning of the 2016/17 season . There he was named NHL Rookie of the Month in January 2017 and ended the season with 61 points. This placed the attacker in fourth position on the league's rookie scorer list and was also part of a historic year of the Maple Leafs, which with Auston Matthews (1) and William Nylander (3) for the first time three players among the top four rookies in one season Team. As a result, Marner was elected to the NHL All-Rookie Team after the end of the season .

He confirmed this performance the following year, before he significantly increased his personal statistics in the 2018/19 season to 94 points and thus topped the Maple Leafs scorer list. He then signed a new six-year contract in Toronto in September 2019 that should earn him an average annual salary of about $ 10.9 million.

For his home country Marner first played in 2014 at both the World U-17 Hockey Challenge and the Ivan Hlinka Memorial Tournament . While he was able to convince personally with nine scorer points at the World U-17 Hockey Challenge, Team Canada Ontario only reached fifth place. At the Ivan Hlinka Memorial Tournament, where he was the best scorer of his team with seven points, the Canadians won the gold medal.

He completed his first world championship tournament in the junior division with the U20 World Youth Championship in 2016 in the Finnish capital Helsinki . Marner scored six points in five games, with which he and Dylan Strome collected the most points within the team . After a weak tournament, the Canadians failed in the quarter-finals to hosts Finland and ended up only in sixth place.

At the 2017 World Cup , Marner made his debut in the Canadian senior team , where he won the silver medal with the team.

Squad of the Toronto Maple Leafs in the season 2019/20