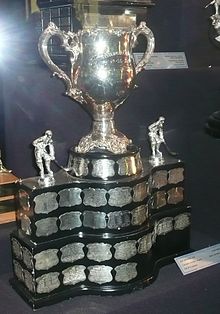 The Memorial Cup is the trophy donated by the Ontario Hockey Association in 1919 for the official Canadian Junior Ice Hockey Championship. Since the Canadian Junior A-Class has been divided into Major Junior and Minor Junior, the Memorial Cup has been regarded as the most valuable trophy. He was originally going to the many fallen Canadians in the First World War remember.

From 1919 to 1928, the cup was played in a return game between an eastern and a western Canadian tournament winner. After that, a best-of-three format was used, then best-of-five in 1937 and best-of-seven in 1942. From 1972 the cup was played between the champions of the three leagues of the Canadian Hockey League in a tournament with a simple final. A fourth team has been taking part since 1983, namely that of the city that hosts the Cup.

Previous winners of the Memorial Cup

Winner in bold , runner-up in italics

The Memorial Cup is held