The title of this article is ambiguous. For the US physicist, see David E. Moncton . 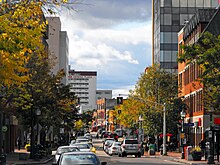 Moncton is a city in the Canadian province of New Brunswick on the east coast of the country. With 71,889 inhabitants (as of 2016), it is the largest city in the province, ahead of Saint John (67,575 inhabitants). Their area is 142 km². The city was nicknamed "Hub City" because it is centrally located in the Maritimes and is an important traffic junction for rail and road connections.

Together with the neighboring cities of Dieppe , Riverview and the communities of Westmorland and Albert Counties , Moncton forms a metropolitan region with around 108,620 inhabitants (2016). About 65% of the population speak English and 35% French . The population is almost entirely white. 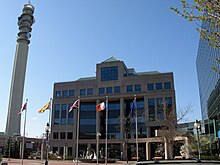 From 4 to April 12, 2009 took place in the 7000-seat end Moncton Coliseum , the Curling World Championships men instead.

In 1733, the French settlers founded the town of Le Coude, where settlers from Pennsylvania moved in around 1766 . The place bears its current name in honor of Colonel Robert Monckton.

Moncton is located southeast in New Brunswick in the geographic center of the maritime provinces . The city is about 100 km southwest of Prince Edward Island and borders the Petitcodiac River to the north at the point where the river runs west-east to north-south.

The economy is strongly influenced by the service sector. Several commercial, transportation and distribution centers are located in the city. Due to its central location in the province, Moncton serves as a transshipment point for goods. The total population within a three-hour drive is around 1.4 million people. Financial services, information technology (IT) and the education and health sectors also play an important economic role in the city.

Moncton earned national prestige for its strong economic performance. The unemployment rate is six percent, which is below the national average. In 2004, the city was named "The best city for business in Canada" by Canadian business magazines. In 2007 the FDi magazine named the city the "Most business friendly small-sized city in North America".

Major Canadian company JD Irving is headquartered in Moncton and has several production sites in the city. It operates in the forestry, paper industry, agriculture, food production, transport and logistics, and shipbuilding sectors and employs several thousand people in the region.

A four-lane bridge, the Gunningsville Bridge , was completed in 2005 and connects downtown Moncton with downtown the adjacent Riverview to the south . On the Moncton side, the bridge is accessible through Vaughan Harvey Boulevard and Assumption Boulevard. The bridge led to an economic boom in this district. Several new buildings were built, u. a. 2006 the Blue Cross Center, an office building. The hotel chain Mariott also opened the Residences Inn in 2008 . A new courthouse was completed in 2011 on Assumption Boulevard. There is also a construction project for a new, large multi-purpose event hall that is to be equipped with up to 10,000 seats.

Retail in Moncton is very important to the economy. In Moncton and the neighboring cities there are two large shopping centers in addition to the shops in the city center. The Champlain Place in the direct neighboring city of Dieppe has 150 shops on an area of ​​around 76,000 m 2 and is therefore the largest shopping center in the Atlantic provinces in terms of sales area . Another smaller mall, the Wheeler Park Power Center on Trinity Drive is in Moncton. Champlain Place has been refurbished for $ 14 million in the past few years. Another mall on Mapleton Road is under construction.

In the city, the Moncton Wildcats from the Ligue de hockey junior majeur du Québec are at home in ice hockey.

Since the 2017/18 season, Moncton has been home to a team from the National Basketball League of Canada , the Moncton Magic .

The Magnetic Hill Zoo has been geographically part of the city since 1953 and has been financially supported by it since 1979.

There are four universities in Moncton or the immediate vicinity. The Université de Moncton is a public French-speaking university and the largest outside of Québec with around 4,000 students. It has several faculties and offers both Bachelor and Master’s courses. One focus is the Acadian language ; The university owes its foundation in 1963 to the return to them.

The Crandall University is a private university with about 800 students. It offers degrees in various fields of study. Expansion work began in 2009 to increase the capacity to 1200 students.

The University of New Brunswick with around 300 students has a small campus in Moncton, especially for the medical and health sectors. It is located at Moncton Hospital and offers courses for nurses and other healthcare professionals.

The Mount Allison University is a publicly funded university, about 40 km to Moncton in Sackville is approximately 2500 students in various Bachelor's and Master's programs.

The Greater Moncton International Airport is located in Dieppe . The airport connects several cities in Canada as well as with the United States. In 2002 a new terminal was completed. Around 575,000 passengers use the airport each year. That makes it the tenth largest in Canada. There are flights to Halifax, Montreal, Ottawa, Toronto, Hamilton and New York City. The airport is served by Air Canada , Jazz Airlines , Westjet , Porter Airlines and Continental Express . There are also seven seasonal flight connections offered by CanJet , Sunwing Airlines , Sunquest and Air Transat . FedEx and Purolator use the airport as a cargo handling point and operate a corresponding infrastructure there.

The site is also home to Moncton Flight College, the largest flight school in the country. Furthermore an RCMP Air Service of the Canadian Federal Police Royal Canadian Mounted Police (RCMP), as well as the helicopter rescue units of the New Brunswick Air Ambulance.

The Moncton Area Control Center is one of Nav Canada's seven regional air traffic centers . It coordinates around 430,000 flights a year. 80% of these are flights entering or exiting Canadian / North American airspace.

The VIA Rail Canada Moncton train station in downtown

Freight traffic in Moncton is operated by the Canadian National Railway , passenger traffic by VIA Rail Canada . VIA Rail has a downtown train station that operates six days a week and connects Moncton with Halifax and Montreal .

Moncton is on Route 2 of the Trans-Canada Highway , which runs from Nova Scotia in the east to Fredericton and Québec in the west. In addition, other highways connect Moncton with other cities. New Brunswick Route 1 is a highway that leads via Saint John to the US border.

The municipal company Codiac Transit is responsible for local passenger transport. It operates 40 buses on 22 routes in Moncton, Dieppe and Riverview.

Moncton is home to Acadian Lines, a transportation company that operates several intercity bus routes. The buses run regularly between all major cities in the region, such as B. Charlottetown , Halifax and Truro .