from Wikipedia, the free encyclopedia
This is the spotted version , flagged on June 12, 2020 . There is 1 pending change that has yet to be viewed.

The main building of the pedagogy, after the demolition of the "small school house"

The Otto Kühne School in the Bad Godesberg district of Bonn - also known as Päda (abbreviation for pedagogy ) - is a state-recognized private substitute school and as such is on a par with a state grammar school . The school is attended by around 800 students who are taught by almost 60 teachers. The school had a boarding school until the end of the 2010/11 school year .

The Otto Kühne School was founded in 1883 by Pastor Julius Axenfeld as a Protestant pedagogy . In 1887 Professor Otto Kühne was employed as a teacher and boarding school director, and a little later he took over the school. Since then, it has been owned by the Kühne family. The boarding school and school have been called the Godesberg Otto Kühne School since 1937 . Since 1989 the Otto-Kühne-Schule has belonged to two GmbHs whose managing directors are Otto Kühne's great-grandchildren.

The school building was built between 1889 and 1901 according to plans by the Barmen architect Friedrich Schutte. The excavation work began in autumn 1899, the foundation stone was laid on March 17, 1900 and the inauguration on August 1, 1901. At that time it was one of the largest buildings in Godesberg, had a high tower with an observatory and thus shaped the townscape. On the afternoon of July 9, 1920, its original appearance was greatly changed by a roof fire: the tower and the large auditorium were destroyed. The building was then renewed in its current form by the architects Willy Maß without a tower by Easter 1921 .

In 2008 the Otto Kühne School celebrated its 125th anniversary with a big party. At the end of the 2010/2011 school year, the last boarding house was given up and closed.

The Otto Kühne School is located in the Godesberg district of Villenviertel , only separated from the Rhine by the former boarding houses and a park. The boarding houses, the gym and two school buildings are grouped around the schoolyard. The old school building, a striking seven-story brick building, has been a listed building since 1983. 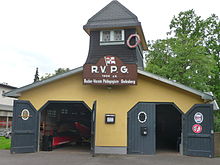 Rowing club of the pedagogy

The Otto Kühne School is one of the few private grammar schools in Germany that are not sponsored by churches, orders or other large organizations. This allows the school management a particular freedom in the implementation of the pedagogical concept. When selecting teachers, special emphasis is placed on commitment beyond the lesson times.

Since 1909, the pedagogical concept has included membership in the rowing club Pädagogium Godesberg (RVPG).

In 1899 the association of former students of the Bad Godesberg and Herchen 1899 e. V. (VESDEP), founded. The Vesdep-Nachrichten, which reports on the latest from the school, the RVPG and the Vesdep members, continues to appear today.

At the beginning of 2011, the school management became aware that there had been sexual assaults on young people by a teacher at the Otto Kühne School in 1985 and 2006; the accused teacher then quit the service. Due to the statute of limitations, the first abuse was no longer investigated, while the 2006 case was prosecuted.

In 2013 there was an incident in which a teacher watched pornographic material in class for several weeks in the presence of his students. The teacher was suspended and a case against him was initiated.