The route begins on the Alberta border in the city of Lloydminster , which is part of both Alberta and Saskatchewan , on Alberta and Saskatchewan Highway 17 . It leads east and comes about 50 km west of Battleford into the valley of the North Saskatchewan River . This is followed by the highway, only to cross it at Battleford. At Langham the river is crossed a second time, but the river is also left. The highway continues in a south-easterly direction and comes to the largest city in the province, Saskatoon . As a bypass in the north and east, it leads around the city and meets several highways that open up the area around Saskatoon. The South Saskatchewan River is also crossed in Saskatoon . East of Saskatoon, Highway 16 takes you to the Quill Lakes , Canada's largest salt lakes. The route then runs in a south-easterly direction, bypassing the city of Yorkton in the northeast. Past Langenburg , the highway then meets the provincial border with Manitoba and continues there as Manitoba Highway 16 . 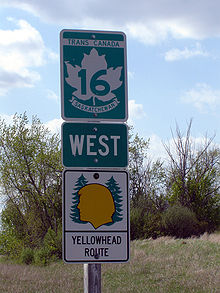 Distinguished as a Trans-Canada Highway and a Yellowhead Highway

As part of the Trans-Canada Highway, the highway is marked with the special Trans-Canada sign. In addition, the Yellowhead Highway will be marked with a special sign along its entire route. The yellowhead symbol is reminiscent of Tête Jaune (French for yellow head). Tête Jaune was a trapper of Iroquois descent who led an expedition for the Hudson's Bay Company along this route to western Canada.

Sections of the Trans-Canada Highway System