The title of this article is ambiguous. Further meanings are listed under Schwiesau (definition of terms ) .

Schwiesau is a district of the town of Klötze in the Altmarkkreis Salzwedel in Saxony-Anhalt .

Schwiesau is a round square village in the Altmark that has been extended to the north and east . It is 7 kilometers east of Klötze, not far from the B 71 in the direction of Salzwedel , in the "Zichtauer Berge und Klötzer Forst" nature reserve. The Kakerbecker Mühlenbach flows southwest of the village to the north past the Schwiesauer Heide into the nature reserve Jemmeritzer Moor . The river used to be called Bäke (stream).

Schwiesau was first mentioned in a document as Zuisowe in 1301 , when the margraves Otto , Konrad and Johann donated the previous possessions of the knight of Buzt in Schwiesau to the Neuendorf monastery .

In 1588, the town's rye harvest was destroyed by hail. The damage was so great that the neighboring office Klötze, for the pastures leased in the area of ​​the office through Schwiesau, waived the oat lease in the amount of 60 bushels .

Franz Mertens derives the name from the Wendish swestka for plum . The place would be translated as Zwetschgenplatz . Johannes Schwarz thinks that the name could also come from swina for pig , which means pig floor or pig owl .

The last mayor was Helmut Fuchs.

Blazon : “In the black, gold-flanked shield a soaring, left-facing, gold-crowned and tongued silver snake; the sides of the shield are each covered with a blooming red poppy stem. "

The coat of arms was designed by the heraldist Uwe Reipert.

The flag of Schwiesau has black, white and black stripes, the wider median of which is covered with the coat of arms of the former municipality of Schwiesau. 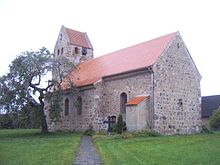 The Schwalbe Schwiesau sports club (from 1951 to 1990: Tractor Schwiesau ) was founded in 1920. The first men's soccer team plays in the Salzwedel regional league.

The Agrargemeinschaft Schwiesau GmbH cultivates an area of ​​around 750 hectares, grows grain, rapeseed, sugar beet and potatoes and operates milk production. The company was founded in 1991 as an agricultural production cooperative.

Outline of the city of Klötze