Alma - A Show Biz ans Ende is a play by the Israeli author Joshua Sobol in which different scenes from the life of Alma Mahler-Werfel are played simultaneously on different floors and rooms of a building. In 1999, a three-part television film by world premiere director Paulus Manker emerged from this .

The play describes the life of the artist museum Alma Mahler-Werfel in different, parallel scenes . The first part tells the story of Alma with Gustav Mahler , her marriage, Alma's separation from Gustav Klimt , the Burgtheater director Max Burckhard and her piano teacher Alexander Zemlinsky . After eight years of marriage, Alma met the young architect Walter Gropius and fell in love with him. A second plot tells the story of Gropius, his encounters with Franz Werfel , his love night with Alma and the confrontation with Mahler. A great debate leaves a desperate Mahler who seeks consolation in an analysis from Sigmund Freud . The storyline Franz Werfels, his encounter with Alma's daughter Anna Mahler , his trip to Palestine in 1925, his world success as a novelist and emigration to the USA also run in parallel . At the end of the first part, Gustav Mahler is buried in a large funeral procession. The audience then receives an invitation to Mahler's funeral feast.

In the second part, Oskar Kokoschka appears, with whom Alma was connected in an ecstatic love affair. He has to go to war and is badly wounded. At the same time Franz Werfel found out in Italy that his books were banned in Nazi Germany, he emigrated with Alma to Santa Barbara in California and died there in 1945. Out of disappointment, Kokoschka had Alma make a life-size doll and invited everyone involved to an orgiastic masked ball. The doll is beheaded and carried away in triumph. In a final “Grande Valse Brillante”, Alma lets all the men of her life go by again.

The interactive play, which the author calls Polydrama , was initiated in 1996 by the artistic director Klaus Bachler for the Wiener Festwochen and premiered in the former Sanatorium Purkersdorf under the direction of Paulus Manker . The sanatorium near Vienna is a building by the Art Nouveau architect Josef Hoffmann , a friend of Alma Mahler's stepfather Carl Moll and the architect of Alma Mahler's villa on Hohen Warte .

The atmosphere of the building and the opportunity for the audience to interactively participate in the theatrical staging of Alma Mahler-Werfel's life, as it were, as one of her contemporary guests, brought the “Polydrama” between 1996 and 2011 to over 400 sold-out performances. The play became a cult; Manker also made a film about it in 1999. 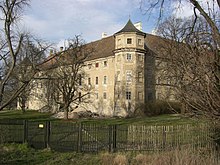 Sanatorium Purkersdorf near Vienna, location of the premiere

The Kronprinzenpalais in Berlin (2006)

Alma is described by the author as a "theatrical journey", with many different stations, people and parallel storylines. The viewer is sent on a journey through time and space and can decide which person and perspective they want to follow. He gives up his conventional passive role and still remains a consumer, especially since attending the performance is connected to a gala dinner. It is recommended to visit the play at least three times, but the record is now 73 visits by an enthusiastic audience.

After the Sanatorium Purkersdorf near Vienna, there were multilingual sequels at Alma's places of life: 2002 Venice (in the Armenian Palazzo Zenobio), 2003 Lisbon (Convento dos Inglesinhos), 2004 Los Angeles (Los Angeles Theater in Downtown LA), 2005 Petronell Castle near Vienna, 2006 Crown Prince's Palace in Berlin and in 2007 in the Kurhaus Semmering on the Semmering , not far from Alma Mahler's summer house in Breitenstein . In 2007, the designer Nina Ball was nominated for the Nestroy Theater Prize for the “development of the Kurhaus Semmering” .

Jerusalem was planned as the venue for 2008 , where the play should also be performed in Hebrew with parts in Yiddish for the 60th birthday of the State of Israel . In 2008, however, the game was played in Vienna at the kk Post and Telegrafenamt in German and English. Production resumed at the same location in July 2009 and only then traveled to Jerusalem, where it premiered in October 2009 at the Museum for Underground Prisoners , the former central prison of the British Mandate Administration , with Israeli and European actors in Hebrew and English. This performance caused a lot of dust because the Israeli Defense Ministry, the museum's operator, censored Sobol's play and even banned images of paintings by Oskar Kokoschka and his life-size Alma doll. Sobol replaced “immoral” words with metaphorical images, “ which actually evoke much more associations than the common terms ” (Sobol). An explosive new scene was added especially for the Israeli performance: a fictional meeting between the founder of the “Jewish Arab Workers Fraternity” Aron Cohen and Alma Mahler-Werfel in the Jerusalem prison, i.e. at the venue itself, about the peaceful coexistence of Jews and Arabs formed a new stop on the piece.

In 2010, in its 15th year, the play was performed again in Vienna, at the Imperial and Royal Post and Telegraph Office , where Gustav Mahler's 150th birthday was celebrated on July 7th . In 2011, the 100th year of Gustav Mahler's death, the venue was Palais Martinic on Hradschiner Platz in Prague . In 2012 there was again a bilingual show at the Post and Telegraph Office in Vienna, for the first time as a New Year's Eve performance. Found in August 2013, now in its 18th year. the last performances take place in Vienna. In 2014 it was played in the Raxwerke in Wiener Neustadt , where the piece celebrated its 20th anniversary. In 2017 the piece was performed again in Wiener Neustadt, and on August 25, 2018, the 500th performance was celebrated there.

In 2010 Paulus Manker received the Audience Award of the " Nestroy " theater award for Alma .

Alma's men and lovers were played by:

During the Vienna years, Hollywood returnees Leon Askin was a guest at «Alma», who was close friends with Alma in the 1960s. He told from his memories and answered questions from the audience in an "Alma Talk Show".

Joshua Sobol on the polydrama:

A polydrama is a drama that consists of several interwoven storylines that take place and are played in parallel in different locations .
A polydrama is a theatrical journey because it leaves the beaten path of conflict and situation based drama and uses the possibilities of a travel drama in which the protagonist is not trapped or entangled in a single plot or conflict , but rather traveling on a road that is open on all sides, falling in love and falling in love with people, who appear and disappear again and cross the route of the travelers for a few moments.
The observer of a polydrama is invited to leave the motionless posture of the observer of a conventional drama and replace it with the activity and mobility of the traveler. Therefore, the viewer becomes a companion to the characters traveling through this travel drama, who chooses the events, the path and the person he follows after each event, and thereby builds, destroys and recovers his own version of the polydrama .

Alma is more than a theater spectacle, it is a theater fascination. An interactive total work of art, witty, sensual and full of passion. (Southgerman newspaper)

A place enchanted by fantasy, a completely unusual, gorgeous spectacle. Naturally, Helmut Berger's poignant Mahler and Manker's excessive Kokoschka dominate the game. But the entire team is involved in the triumph. (Courier)

Manker's festival staging is magical and never boring for a second. Wonderfully wild and vulgar, passionate, colorful and complex. If you can, you should see Alma at least three times so as not to miss a scene. (Salzburg News)

A visit to the ruins as a funeral and necromancy. Nowhere more magical than in the Art Nouveau ruins of the former Purkersdorf sanatorium by Josef Hoffmann. A very special kind of synchronized drama takes place there. (Frankfurter Allgemeine)

A theater and social event that should become a permanent fixture in our city and should not be missing in any offer of a visit to Vienna. A great idea and implementation, a scenario that opens the heart and senses. (New Illustrated World)

Paulus Manker proclaimed an Alma Mania on the night of the full moon. The fictional party for Alma's birthday was applauded by the premiere audience. Leon Askin made his appearance his own talk show. His star guest was the granddaughter of Alma (nee Zsolnay), who lives in Vienna. (The standard)

The experience value of the three-hour long happening exceeds that of most conventional theater events. The surprise success of the past festival weeks. (Butterfly)

Sensual funeral feast! The viewing pleasure will be shown until June 16, if the fin-de-siecle metropolis does not reflect on its strengths and establishes the new cult piece in the long term. (The mirror)

Paulus Manker brings about the organizational marvel of a perfectly operating theater machine. Seldom before has an evening at the theater been so entertaining, instructive and fulfilling. Go there, experience! (Wiener Zeitung)